Inside… there was a surprise book with a red cover…but we don’t know the title or contents. Historians deem the book and other contents of the box too fragile to be quickly examined. They will need to be examined in a temperature and pressure controlled environment. 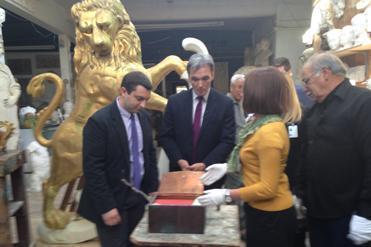 The society first learned of the possible existence of the time capsule three years ago from the great-great-granddaughter of Samuel Rogers, a craftsman who had worked on renovations to the building and was believed to have placed the box in the lion’s head and catalogued its contents. A 1901 article from The Boston Globe surfaced later, alluding to contents of a copper box “which will prove interesting when the box is opened many years hence.”