Continuing it’s e-books everywhere approach to digital reading, the company announced Wednesday in a blog post that it would soon offer a product called “Kindle Previewer for HTML 5? that will allow readers to view samples of books directly from within a Web browser.

In the past Amazon has required readers to send a sample section of a book to a device before it could be previewed.

The New York Times reports that later this summer, Google plans to introduce its long-awaited push into electronic books, called Google Editions. The company has revealed little about the venture thus far, describing it generally as an effort to sell digital books that will be readable within a Web browser and accessible from any Internet-connected computing device.

Now one element of Google Editions is coming into sharper focus. Google is on the verge of completing a deal with the American Booksellers Association, the trade group for independent bookstores, to make Google Editions the primary source of e-books on the Web sites of hundreds of independent booksellers around the country, according to representatives of Google and the association.

The partnership could help beloved bookstores like Powell’s Books in Portland, Ore.; Kepler’s Books in Menlo Park, Calif.; and St. Mark’s Bookshop in New York. To court the growing audience of people who prefer reading on screens rather than paper, these small stores have until now been forced to compete against the likes of Amazon, Apple and Sony.

The Google deal could give them a foothold in this fast-growing market and help them keep devoted customers from migrating elsewhere.

This is the day British Columbia’s libraries pull the plug on the AskAway! Program, which let patrons from all over the province ask questions of librarians online, in real time, and receive an immediate answer.

The provincial plan for libraries and literacy, set out in Gordon Campbell’s 2004 strategic planning document Libraries Without Walls, was to bring the “world within the reach” of anyone with Internet access (and a card to a B.C. library).

Back then, Campbell was optimistic about the potential for digital technologies to promote reading in B.C. He described libraries as “the front lines in the effort to make British Columbia one of the most literate places in the world.”

AskAway, launched in 2006, fit Campbell’s stated overall goal for Libraries Without Walls, to “facilitate equitable access to information for all British Columbians.”

Librarians too have used the service to get a second expert opinion to complement their own when faced with a particularly difficult or specialized question from a patron. The Tyee reports.

From an information literacy angle comes this story about Russia sending spies to find info that arguable could be easily found in other sources. Excerpt from story: “This reflected the mentality of the institution that is willing to spend millions and millions of dollars to get readily available information,” Cohen says.

Maybe they need to hire a librarian.

PORTSMOUTH NH — Thousands of bookmarks promoting two organizations’ points of view recently created a headache for public libraries on the Seacoast. The two groups were the School Sucks Project and Freedomain Radio.

The School Sucks Project Web site calls for an end of public, government-funded education in the United States, charging that it is ineffective and values obedience over creativity. Freedomain Radio bills itself as a philosophical radio show.

It’s not a new phenomenon at libraries, but Portsmouth Public Library Director Mary Ann List said several in the area were hit recently with a scourge of bookmarks promoting an unspecified political cause between the pages of books. The messages tend to be politically or religiously focused, she said, and libraries typically strive to remain disassociated with that type of propaganda.

The latest dispersal was the largest Cathleen Beaudoin said she has ever seen. The Dover Public Library director said, while she’s found pamphlets and the like within small groups of books in the past, as well as such oddities as a $100 bill, an endorsed paycheck and a strip of bacon, nothing could match the number of stuffed books (over 5,000) that cropped up in May.

Alcatraz Versus the Evil Librarians by Brandon Sanderson is a hilarious, tongue-in-cheek story that had me laughing out loud right from the beginning. It’s a fast paced book that creates a fascinating world, but doesn’t get bogged down with too many details. It’s similar to Harry Potter in that Alcatraz is an orphan who is unaware of his special power and the whole secret world he is from. The thing that sets it apart is that Alcatraz narrates the book as if he is writing it and often speaks directly to the reader—with hysterical results.

San Diego is getting a new expensive main library. The City Council took an historic vote last night to go ahead with construction of a new central library downtown.

Anyone who has lived in San Diego for a while knows that the dream of a new central library has been in and out of the news for years. The architect, Rob Quigely, designed its imposing dome shape in the 1990s. The site on Park Boulevard in the East Village was chosen a decade later, and now, finally, a contract will be signed to break ground. The First phase is estimated to cost about $150 million.

Mayor Jerry Sanders reminded the city council that $17 million has already gone into planning and well over $100 million has been scraped together so far to build it. Another $32 million is required to finish the job. Without that, the doors won’t be able to open in 2014, the state mandated deadline. The vote was not unanimous.

“We’ve invested nearly 20 years into planning for this new central library,” Sanders said. “As you make your decision, I want to remind you that not one cent of this project’s funding can be used for other city services. It can’t be used for branch libraries, can’t put additional police or firefighters on the streets, and it can’t be used to fix potholes.

Libraries and librarians are always dealing with some sort of crisis. I recently saw this and thought that other librarians might appreciate seeing it. 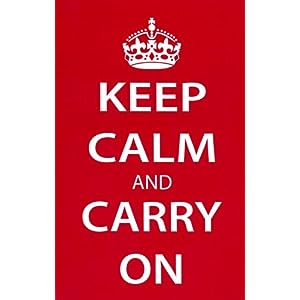 Wikipedia entry for Keep Calm and Carry on

Great variation on Keep Calm and Carry On

Quincy Councilor Daniel Raymondi has asked Mayor Thomas Koch to make public a list of people who have viewed pornography on library computers within the past year. The council unanimously approved a resolution on the idea last week.

Checklist Manifesto for the Reference Desk
“…This is also true of reference work. Some sort of checklist or decision tree is probably covered in most library school reference text books, but I thought I’d take a crack at it. Of course, any checklist like this could vary widely by library, depending on available resources, but the following few questions might help make sure all bases are covered consistently…”