Well, all right, that’s not a literal quote, but it might as well be. Salon has never made any pretense of its anti-Amazon leanings (as we saw recently with Laura Miller’s piece claiming she was swearing off Amazon), but lately it seems to have gone a little round the bend. Over the last couple of days, it’s started coming up with whatever Amazon hit pieces it possibly could. I’m talking serious scraping of the bottom of the barrel here.

From Shelf-Awareness a report on author James Patterson’s address to conference participants:

“Amazon seems out to control shopping in this country. This ultimately will have an effect on every grocery and department store chain and every big box store and ultimately put thousands of mom and pop stores out of business. It sounds like a monopoly to me. Amazon also wants to control bookselling, the book business and book publishing. That’s a national tragedy. If this is the new American way, it has to be changed by law if necessary.”

The Passive Voice linked the other day to yet another Amazon-punisher: Jack Shafer, posting at Reuters, writes about the many ways Amazon has enmeshed their hooks into his life—Prime membership, Kindle ownership, magazine subscriptions and so on, all of which he used and enjoyed quite happily. And then! Amazon is Evil Overlording Hachette! You can’t get Malcolm Gladwell anymore! He’s quitting Amazon forever!

There is no emoticon big enough to properly convey my eye roll here. I have read dozens of articles on this Hachette and Amazon feud, including several by my fellow Teleread contributors. And I don’t get it. Articles like Shafer’s rant are presupposing a lot of things which I don’t feel we can accept as given and true:

Growing up moving from farm to farm, Storm Reyes had to pack light. That meant no books. She felt hopeless about the future, until a bookmobile appeared in the fields and changed her life.

Excerpt: My long-held conviction that broad-based subscriptions for ebooks were not likely to work is partly based on facts that are now changing. It is still by no means a slam dunk that ebooks must go where Spotify has taken digital music and Netflix has taken the digital distribution of TV and movies, but it looks more likely today than it did six months ago. Still, looks could be deceiving.

The core of subscription economics is to pay less to the content supplier than they earn other ways to give you some headroom to create a value proposition for consumers. That’s how Spotify and Netflix work. That’s how Book-of-the-Month Club works.

Staffers at the Library of Congress have been looking for 250 books that belonged to Thomas Jefferson. He gave these books and several thousand more to start the library more than 200 years ago.

Cites & Insights 14:6 (June 2014) is now available for downloading at http://citesandinsights.info/civ14i6.pdf

American author and poet Maya Angelou, who is best known for her groundbreaking autobiography “I Know Why the Caged Bird Sings,” has died at age 86 in North Carolina, her publisher confirmed on Wednesday.
The prolific African-American writer penned more than 30 books, won numerous awards, and was honored last year by the National Book Awards for her service to the literary community. 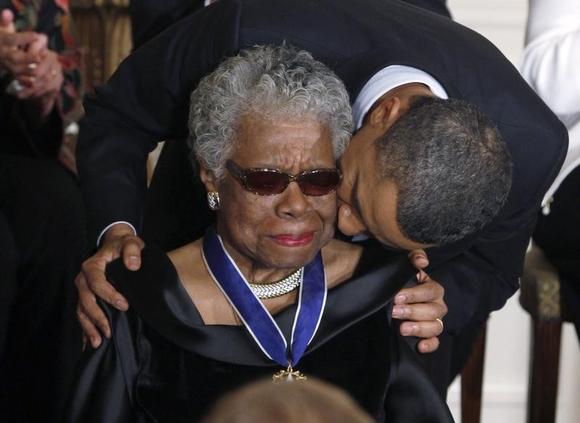 Poet, performer and political activist Maya Angelou has died after a long illness at her home in Winston-Salem, N.C. She was 86. Born in St. Louis in 1928, Angelou grew up in a segregated society that she worked to change during the civil rights era. Angelou, who refused to speak for much of her childhood, revealed the scars of her past in I Know Why the Caged Bird Sings, the first of a series of memoirs.