A post on found books, serendipity, and Roger Ebert. 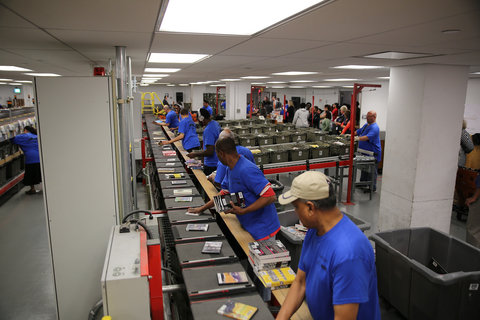 In the fourth annual “battle of the book sorters,” the giant mechanical sorter shared by the New York Public Library and the Brooklyn Public Library sorted 12,570 items in an hour, while a similar behemoth belonging to the King County Library System in Washington state sorted a mere 11,868.

Article from CityLab about Washington, DC’s Spy Library proposed additions to the classic Carnegie Library. The request however was denied by District preservationists.

Across the nation, the libraries that Andrew Carnegie built have been transformed and reused as historical museums, city halls, art centers, and even bars and restaurants, sometimes by dramatic means.

It is a testament to Carnegie’s philanthropic investment in cities—the largest in U.S. history—that so many of these buildings are still in use. Yet no one can say exactly how many are standing now.

“As far as I’m aware, the last person to conduct an inventory of Carnegie libraries was Theodore Jones, back in 1997,” says Ron Sexton, librarian for the Carnegie Corporation of New York. Almost 20 years later, Jones’s book, Carnegie Libraries Across America: A Public Legacy, still offers the best estimate to a question that may not have an exact answer.

Almost everything being said about publishing today is predicated on two facts that are dead wrong. The first is that publishers are somehow being hurt by ebook sales. The second is that independent bookstores are being crushed. The opposite is true in both cases, and without understanding this, most of what everyone says about publishing is complete bollocks.

With the rising costs of mounting student debt, education innovators are exploring ways to change the traditional college system. What might college 2.0 look like? WSJ’s Jason Bellini has #TheShortAnswer.

A recent Ithaka report by Roger Schonfeld asks “Does Discovery Still Happen in the Library?” My immediate thought was “did it ever?” quickly followed by “why do we assume it should?”

There’s a fight brewing in Omaha, Nebraska of all places. I say “of all places” because from a distance Omaha seems like a calm place. Maybe it’s all those Mutual of Omaha commercials I saw as a child. Omaha is reassuring.

The mayor wants the library to give out the names and addresses of patrons to the police when they ask, which current policy in Omaha and most other public libraries doesn’t allow.

Opinion piece in newspaper. Interesting to see the thought process of the public.

Excerpt: I say vote NO on the Park Ridge Public Library referendum!

I counted 28 computers at the library (some may have been for reference data) and not all were in use. To top it off, the library has already purchased iPads with games for use by children. When did the library become a teaching source? That’s what the schools are supposed to do.

A Tacoma woman is in jail, accused of trying to set a library on fire. It happened on a busy Saturday at the Tacoma Main Library, forcing about 250 people to evacuate.

Library workers don’t believe the motive was political. According to court documents, Sailly admitted she had an issue with a library worker earlier in the day and admitted to wanting to burn down the library.