Chances are the Doctor won’t be showing up at your local library anytime soon—unless, of course, you have an infestation of Vashta Nerada (in which case, don’t forget to count the shadows!). But whether in fantasy or science fiction, there are any number of amazing fictional libraries we’d love to visit, especially to meet up with the guardians of the stacks. So we turned to Twitter to find out where your SFF librarian loyalties lie. Here are your favorites, as well as a few of our own!

Are you Happy? These Port Washington NY Librarians Are!

If you can believe the New York Times:

Portland, OR “A man is in the library and goes up to the desk. He asks for a burger and fries. The librarian says, ‘Sir this is a library.’ The man replies, ‘Oh, I’m sorry,’ and leans over and whispers, ‘Can I get a burger and fries?’

The NYC joke is based on an outdated characterization of New Yorkers:

New York, NY “I was at the library today. The guy at the desk was very rude. I said, ‘I’d like a card.’ He said, ‘You have to prove you’re a citizen of New York.’ So I stabbed him.”

Have a great weekend!

April 1st is the birthday of French gastronome Jean-Anthelme Brillat-Savarin (1755-1826), famous for his book Physiologie du goût, a witty meditation on food. April fools' day is also the perfect day to eat your words and play with them as the "books" are consumed on the day of the event. This ephemeral global banquet, in which anyone can participate, is shared by all on the internet and allows everyone to preserve and discover unique bookish nourishments.

A Librarian Who Dog-Ears (but Her Mom Disapproved)

Some people handle books so tenderly that even after they’ve read one cover to cover, it looks untouched. They turn each page carefully, and always use bookmarks. They refrain from cracking the spine. They never eat as they read, so the pages aren’t dotted with red sauce or spotted with chocolate. And they wouldn’t dream of leaving a book lying around where their Yorkie-poo (or toddler) might nibble the corners.

When I read a book, I move right in and make myself at home. I dog-ear pages, underline, highlight and make marginal notes. I’ll use the blank pages to make shopping lists or jot down phone numbers. At the ballpark, I’ve been known to use that space to list the opening line-ups of both teams. By the time I’m through reading a book, you can definitely tell that I’ve been there.

Relief from the January Blahs, "Cards Against Librarianship"

A forthcoming card game by Emily Lloyd, aka @poesygalore / Shelf Check. Based on Cards Against Humanity. 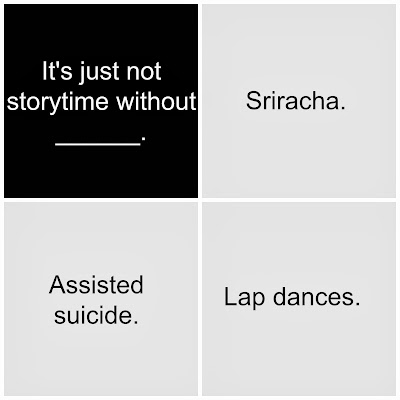 In Honor of Melvil Dewey's Birthday...

Via Twitter: Cecelia Larsen @celialarsen "in which a classroom library is destroyed by flood, and book bloggers help save the day": #books

Read all about how volunteers helped restore a flooded classroom with new books at Cecilia Bedelia's Blogspot. Nice to hear about people adding books to school libraries (instead of removing them). 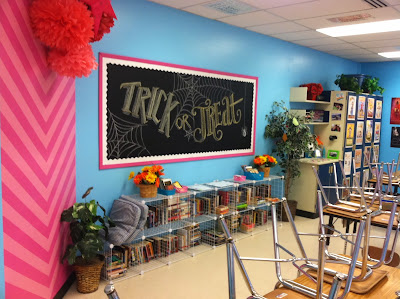 The Absolutely True Diary of a Part-Time Indian by Sherman Alexie
Stupid Fast by Geoff Herbach
Briar Rose by Jane Yolen
Mexican WhiteBoy by Matt de la Pena
Monster by Walter Dean Myers
Lord of the Flies by William Golding
White Cat by Holly Black
The Scorpio Races by Maggie Stiefvater
Book of a Thousand Days by Shannon Hale
The Only Alien on the Planet by Kristen D. Randle

If you have any further suggestions of books that belong in a 9th grade classroom (for self-directed reading), please mention them in the comments. Ms. Larsen and I thank you!

...Others Titles by the Same Author

Geek Pride Day Is May 25: Here's How To Celebrate

Read Write asks, "Ready to embrace another arbitrary holiday - or just looking for an excuse to slack off and eat cake? Who isn’t? This Saturday, May 25, is internationally known as Geek Pride Day." A holiday "that works overtime as a general celebration of all types of geekery."

How will you celebrate?

Paul Krugman - In Praise of Public Libraries (Personal and Trivial)

"Well, there are coffee shops...But you can only drink so much coffee. And the answer is, libraries!"

Libraries & Peeps, inseparable. What is your library doing with Peeps this week?

The Verge asks: "What if best-selling albums had been books instead? That's the question graphic designer Christophe Gowans asked for his new collection, The Record Books. Gowans took album titles and artist names and constructed a fictional backstory behind each. The full collection is up on Gowans' site"

From the New York Times blog:

New York Public Library is running a pre-National-Poetry-Month Twitter poetry contest through Sunday, in which you submit three very short poems and compete for a chance to win a set of books by America’s leading poets. Here's where you can enter the contest .

One poem has to be about libraries, books, reading or New York City, but the other two can be about whatever you like. It is the “whatever” ones that, naturally, drew our attention as we made our way through some of the hundreds of entries submitted just in the past two days. Some rated impressively high on the what-the-heck scale.

Here are a few of our favorites, a few about books but most not. It is possible that some of them were not meant as poems but were just tweets with @NYPL in them.

@NYPL i ripped the wings off the wind and fed them to the birds / they aren’t as holy as they thought they were. — Drew Knapp (@drew_knapp) 6 Mar 13

@NYPL To become dead even for a moment is not prudent says Yevtushenko, so resist the gentle pull of the steering wheel always to the right — Peggy Delmas (@PeggyDelmas) 7 Mar 13

A Message From Stephen Colbert

Probably should have saved this one for Friday, but... (I suggest you mute before trying).

The Onion TV - Back of the Library "Smells Like Weed"