Guardians of the nation's attic

Guardians of the nation's attic
The National Archives keeps watch over 10 billion historical records. And its treasure hunting team keeps watch over collector shows and EBay for the scraps of valuable history that have been stolen.

LOC and Partners Preserving the Internet

This week in Washington, DC, the Library of Congress is gathering its "Digital Preservation Partners" for a three-day session -- one of a number of such meetings the library has been holding under a broad initiative called the "National Digital Information Infrastructure and Preservation Program." Its multi-year mission is "to develop a national strategy to collect, preserve and make available significant digital content, especially information that is created in digital form only, for current and future generations."

It's what Dan Gillmor of Salon calls a non-trivial task, for all kinds of technical, social and legal reasons. But it's about as important for our future as anything I can imagine. We are creating vast amounts of information, and a lot of it is not just worth preserving but downright essential to save. Gillmor's role this week, and at a workshop he joined last year, is to be thinking about the news.

YORBA LINDA CA– Family photos, gifts to President Richard Nixon and some 40 million pages of documents from his administration were made available for the first time Thursday at the Nixon Presidential Library & Museum in Yorba Linda.

The artifacts were shipped earlier this year from the National Archives facilities in Maryland. Nixon Library Director Timothy Naftali said about 50 percent of the collection is still being processed.

Pam Eisenberg, AV technician at the Nixon Presidential Library & Museum in Yorba Linda, has been busy cataloging films and gifts recently consolidated into the collection. One of her favorites film clips is President Nixon meeting a tennis team, which was edited into the movie "Forrest Gump".

"This is the first time that people in California will have access to the documents," Naftali said. "It means that high school and college students and scholars can have hands-on experience working with primary source materials from the Nixon era."

Thursday's opening of the library's research room drew local journalists. On Friday, the library was set to release nearly 100,000 documents, many from the files of former Senator Daniel Patrick Moynihan, who worked in the Nixon Administration, and video oral histories. It is the first local release of materials.

The oldest item in Yale Law School’s rare book collection is a 1,000-year-old fragment of a medieval manuscript bound inside an Italian guidebook for notaries. The newest is a bobblehead doll depicting William H. Rehnquist, 16th chief justice of the United States.

Fred R. Shapiro, an associate librarian, explained the latest acquisition: “A hundred years from now, if someone wants to study the bobbleheads, where will they go? There needs to be an archive.”

And so the Lillian Goldman Law Library, which probably has the best collection of rare law books in the world after Harvard and the Library of Congress, is now the official repository of bobbling likenesses of a dozen Supreme Court justices. 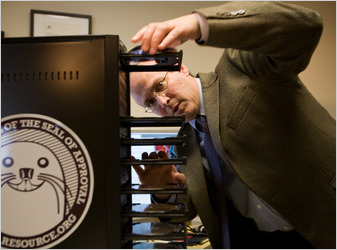 The International Amateur Scanning League has taken it upon itself to copy as much federal video as it can and put it online. Above, Carl Malamud conceived the project.

Having a Nose for Degraded Documents

Having a Nose for Degraded Documents
At long last, scientists have developed a “sniff test” to measure the telltale aroma of old books and irreplaceable historical documents. You know the smell — that “combination of grassy notes with a tang of acids and a hint of vanilla over an underlying mustiness,” as the authors put it. Inhale and smell the Industrial Revolution!

Online archive of UK science launches
The British Library has begun a project to create a vast, online oral history and archive of British science.

The three-year project will see 200 British scientists interviewed and their recollections recorded for the audio library.

An advisory board will help the project pick key technological innovators and scientists for the archive.

National Archives' new director is a kid in a candy store

National Archives' new director is a kid in a candy store
Ferriero, 64, began work in November and had his ceremonial swearing-in Wednesday as the director of the National Archives and Records Administration. He was inaugurated into a little-known job that puts him not only at the helm of the United States' 10 billion-item trove of documents, but also at the forefront of efforts to make the U.S. government as transparent as possible to its citizens.

Enter exhibition here. Enjoy the elaborate virtual reality exhibition, and follow Yeats development as a poet, a playwright and writer of prose. The National Library of Ireland has the largest collection of Yeats manuscripts in the world, many contributed over the years by his widow and by his son.

Genealogy is big business and the Allen County Public Library's Genealogy Center in Fort Wayne IN is profiting from it. Next to pornography, it's the second most searched-for topic on the internet.

During a lecture at the Allen County Historical Museum on Sunday, Genealogy Ctr. Director Curt Witcher said that making hefty portions of genealogy collections free on the Web is actually good for tourism and that technology brings people to the library who otherwise would never have set foot in Fort Wayne. More from Journal Gazette.

Want to get a [Archives] job? Read this post

Over the past few weeks Kate had a bunch of conversations with colleagues who have recently gone through the process of hiring a new staff member in their archives, and many were surprised at how many people were making basic mistakes. So she asked for input from herfriends on Facebook and Twitter, and based on the comments of real-world archival managers, here are some things to keep in mind when you’re going through the process of applying for a job:

Meet the new Archivist of the United States

Sharing a sense of history
Ferriero is first librarian in charge at National Archives. "It's an awesome responsibility," he said in the echoing rotunda of the building. "It's a stewardship kind of responsibility -- a long-term commitment by the U.S. government to ensure that these documents are available in perpetuity and available to the American public. "

A Library for Timbuktu

Submitted by Martin on November 30, 2009 - 2:45pm
Topic:
Archives
In the 16th century Timbuktu was a famous university town, full of students and scribes. Unfortunately, today the remnants of its libraries are in desperate straits, with dust, termites, rain and mice constantly taking a toll on those that survive. But now there is hope: a state of the art library has landed in the dilapidated center of Timbuktu, offering the best hope of preserving and analyzing the town’s literary treasures.

Meiji University in Tokyo has announced plans to open a library devoted to the art of manga, the Japanese graphic novel genre.

Full blurb at the NYT

After 64 years, veteran Robert E. Thomas returns books that he took from a salt mine in Germany during WWII that contained national treasures hidden by the Nazis. Both books were incunabula, one written in Latin and one in German. The National Archives facilitated the transfer.

Where Do Dead Govt Websites Go? To The Cyber Cemetery

In an increasingly digitized world, the cyber cemetery has become the main publicly accessible depository for government records that don't exist on paper. The site is maintained by the University of North Texas and the U.S. Government Printing Office.

Other entities, such as the Internet Archive, take periodic snapshots of Web sites to preserve information. But the Cyber Cemetery, which also has partnered with the National Archives and Records Administration, focuses exclusively on government Web sites and captures them in their final and complete form, UNT Librarian for Digital Collections, Starr Hoffman said.

"Someone needs to take the responsibility of capturing the material for future researchers," said Cathy Hartman, Assistant Dean of Libraries at UNT. "This is government by the people, and we need access to see what our taxes are paying for."

The AP reports: The archived sites include the understandable — the Child Online Protection Act Commission of 2000 — and the unintelligible. (Check out the 2005 Commission on Systemic Interoperability or the 2000 International Competition Policy Advisory Committee Research Collection.) The work is varied, from commissions to help people have more access to health care information to panels that study 20th century antitrust problems.

The handwritten letter to former New Mexico Gov. Lew Wallace is polite, articulate and to the point.

"Dear Sir," begins the missive. "I wish you would come down to the jail and see me."

The letter is from Billy the Kid, dated 1881, and it and others like it are now housed at the Fray Angelico Chavez History Library in Santa Fe, NM.
Here's the story.

The British Library made public yesterday a 30,000-word memoir in which Anthony Blunt, one of Britain’s most renowned 20th-century art historians, and curator of the Queen's art collection, described spying for the Soviet Union, beginning in the mid-1930s, as “the biggest mistake of my life.”

The NY Times reports on the unsealing of the memoir after twenty five years. Blunt intended it as a testament to family and friends, and it was given to the British Library in 1984 by the executor of Blunt’s will, John Golding, on the condition that it be kept secret for 25 years. Frances Harris, the library’s head of modern historic manuscripts, told the BBC on Thursday that its existence was so closely guarded that even she had not read it until recently.

The memoir’s tone of regret for the price Blunt paid personally for betraying his country, coupled with the absence of any apology to those who suffered as a result of his actions, including secret agents working for Britain whose identities he passed to the Russians during World War II, contributed to harsh criticism of the document on Thursday from British historians and commentators.

Houston, We Erased The Apollo 11 Tapes

An exhaustive, three-year search for some tapes that contained the original footage of the Apollo 11 moonwalk has concluded that they were probably destroyed during a period when NASA was erasing old magnetic tapes and reusing them to record satellite data.

There is the saying, "If we can go to the moon we should be able to......" that ends with what you want to be able to do but cannot, can now be modified for libraries:

Story at NPR about the loss of the moon landing tapes and a mention of how a second copy offered some hope but in the end did not pan out.