The World's Twenty-Five Most Modern Libraries

From BestCollegesOnline.com, a list of the 'twenty-five most modern libraries' with links to each. Eight are modern for 'architectural' reasons; twelve are considered to have found "new and creative ways to use technology and design", and five have the best digital collections according to the author of the article, Christina Laun.

Among the top 25 are the national libraries of Australia, Britain, France, Denmark, Czech Republic, Japan and the LOC, and a good number of large metropolitan libraries.

Michael Lieberman's blog at the Seattle Post Intelligencer includes a charming photo of one of the most modern children's libraries (in Japan)... 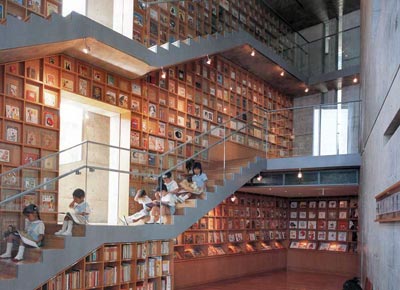 ...but I have a feeling that it wouldn't work to have children sitting on a flight of steps here in the US.

Nor in the UK

And where are the ladders to get the books from the top shelves?

No one is questioning the source this time??? Did we all just give up on that or do we only pick on me?