The Long Sad Story of an Embezzling Librarian

Story out of Pontiac, IL:

Eric E. Colclasure, 44, of Pontiac, the former director of the Pontiac and Odell libraries, was sentenced to six years in prison Thursday afternoon on felony charges alleging he stole from his employers.
In addition to the prison term, Colclasure was ordered by Ford County Circuit Judge Stephen Pacey to pay restitution to Odell Public Library in the amount of $30,118.65 within 24 months of his release. He will also be given credit for three days time served and will spend two years immediately after his prison release in supervisory release.

At Least He Didn't Mention The Library...

Submitted by StephenK on July 12, 2012 - 3:16pm
With the publication of the Freeh report relative to the child abuse scandal at The Pennsylvania State University, Chicago Sun-Times columnist Rick Morrisey is calling for the outright physical destruction of many campus monuments to coach Joe Paterno. Not mentioned in the piece by Morrisey is Paterno Library on-campus which otherwise bears the coach's name.
Topic:
News
Crimes &amp; Criminals
People N Patrons
Libraries
Academic Libraries

Patrons and employees of the public library in Robbins, IL are outraged that someone vandalized the building's air conditioner.

A Dime at a Time

Margo Reed, who earned about $43,000 a year and was described as a conscientious, trusted and well-liked longtime employee, was responsible for taking $163,582 in library fines collected by the three public library branches in Yonkers. It was her job to collect fines — 10 cents for most books, 50 cents for new seven-day ones — and turn them over to the city for deposit.

According to her guilty plea, from July 7, 2004, to Dec. 7, 2010, she would regularly alter the collection paperwork to reflect a lower amount of fees and pocket the difference after taking money out of the library deposit bag. Stephen Force, the Yonkers Library director, said officials discovered that she regularly used correction fluid to alter the receipt sent to her and then entered the new number on the paperwork she filed when she sent the money to the city. The difference between what she received and what she reported was usually $100 or more, he said.

Man shot in back at Mpls. library is paralyzed

Man shot in back at Mpls. library is paralyzed
Hennepin County increased its security patrols of the Franklin Community Library in south Minneapolis on Thursday after a man was shot the day before by someone who accosted him in a library bathroom.

$15K Statues stolen from Library sold for $270 then melted

Statues stolen from Waukegan Library sold for $270 then melted
The thieves who stole a pair of bronze statues, valued at $15,000, from the courtyard of a north suburban library last month sold the artwork to a West Side scrap metal business, which paid them about $270 and then melted the pieces, police said.

On Tuesday, federal marshals barreled into a condominium in Herndon, Va., and found a most unusual book: a leather-bound first edition of the Book of Mormon.

They also found the man who allegedly pilfered the prized tome - worth between $50,000 and $100,000 - from a suburban Phoenix antique book shop, authorities said.

In National Archives thefts, a radio detective gets his man

In National Archives thefts, a radio detective gets his man
Goldin exposed what authorities have called “one of the most egregious instances of theft” from the National Archives, where the government preserves billions of historic documents, photographs and recordings. On Thursday, that investigation is scheduled to culminate in the sentencing in Greenbelt’s federal court of a longtime Archives official who has admitted to stealing nearly 1,000 recordings, many of them rare.

HARWICH — Librarians across Cape Cod are checking their book collections after a Hyannis man was allegedly caught stealing books last week at Brooks Free Library. Arthur Souza, 52, was charged with larceny of library materials valued at more than $250, but police and librarians believe he has stolen from at least four Cape libraries and sold the books to a Chatham antiques dealer who in turn auctioned them on eBay.

Here's a photo of the perp:

Red flags first went up the weekend before last, when Lucy Loomis, director of Sturgis Library in West Barnstable, received an email from a bookseller in South Carolina. The man had seen a book for sale on eBay, an online auction site, that clearly bore library identification markings.

LISTen: An LISNews.org Program -- Episode #191 by The Air Staff of Erie Looking Productions is licensed under a Creative Commons Attribution-ShareAlike 3.0 United States License.

Another crazy shooter, this time in Tulsa, OK. Fortunately no one was killed this time.

(CBS/AP/KOTV) - A gunman who opened fire outside the Tulsa County Courthouse Wednesday afternoon is now in custody after being shot by police.

Tulsa County Sheriff's deputies told CBS affiliate KOTV that a man on the plaza between the courthouse and the library started shooting a gun into the air. Deputies on duty at the courthouse confronted the man and shot him. Photo taken by a library worker:

"During the course of exchange of gunfire, an innocent bystander was hit," police spokesman Leland Ashley said. He said the injuries to the deputy and the bystander did not appear life-threatening.

Library Chief Executive Officer Gary Shaffer told The Associated Press he was returning from lunch when he saw emergency vehicles. A man who appeared to have been shot in the leg was wheeled out of the library by paramedics.

Shaffer said it was unclear if the man, who he said was unconscious, ran into the library after getting shot or if he was shot in the library. There was broken glass in the library from an apparent bullet.

Phoenix Library Crime a Well-Kept Secret?
Last week's arrest was shocking to most -- but sadly -- not to us. Our FOX investigation a few months ago uncovered hundreds of disturbing incidents at Phoenix libraries.

The Chief of the Enforcement Bureau at the Federal Communications Commission issued a 2 page PDF enforcement advisory discussing why using jammers is illegal in any situation and outlining the massive penalties using or importing such a device entails.

Inside Edition Who Is Lurking In Your Public Library

Submitted by tom on February 22, 2012 - 12:41pm
Topic:
News
Crimes &amp; Criminals
Libraries
TV
[Edit 2/23 9:15am] It's now on the site: http://insideedition.com/news/7713/inside-edition-investigates-whos-lurking-in-your-library.aspx To be broadcast Wednesday, Feb. 22 New York, NY – Feb 22nd – It’s the last place you think you’d be a victim – the public library. But an INSIDE EDITION investigation found that crimes are being committed across the country in these supposedly safe havens, from petty thefts to violent, sexual assaults.

From the City Room blog of the New York Times, a remembrance of how Warhol's shooter, Valerie Solanas defaced a copy of the library book called “S.C.U.M. (Society for Cutting Up Men) Manifesto” (lovely title!) that she herself had authored. 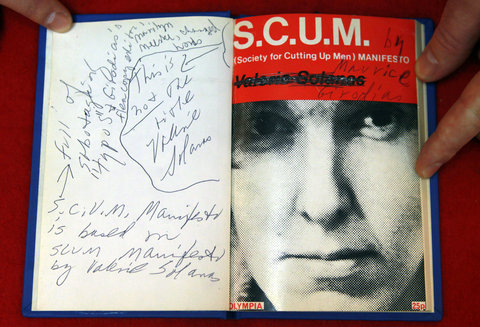 The opening sentence called on women to “overthrow the government, eliminate the money system, institute complete automation and destroy the male sex.” It was published in paperback; the library had its copy bound in hardback, to minimize the wear and tear, in mid-1976.

Wednesday (today) is the 25th anniversary of Warhol’s death after gall bladder surgery at what was then known as New York Hospital-Cornell Medical Center, 19 years after Ms. Solanas opened fire and wounded him. She was angry because he had lost the manuscript of a play she had written — a play with an unprintable title that she wanted him to consider. More from the New York Times.

Authorities in central Nebraska used a helicopter with an infrared camera to track a fugitive, and found another wanted man in a public library in Minden after a high-speed chase in which shots were fired at a state trooper's cruiser, the Nebraska State Patrol said Saturday.

A Newton library worker was arrested on child pornography charges on Tuesday.

Authorities searched the suspect’s home in Newton on Tuesday. Court papers say video files of child pornography were found on his lap top computer, as well as approximately 21 images.

Submitted by StephenK on January 23, 2012 - 12:17am
This week's episode looks at the aftermath of the SOPA battle and the take-down of MegaUpload while looking at some consequences thereupon for the knowledge ecology. A draft resolution for any upcoming ALA meeting is also presented. Direct download link: MP3

LISTen: An LISNews.org Program -- Episode #183 by The Air Staff of Erie Looking Productions is licensed under a Creative Commons Attribution-ShareAlike 3.0 United States License.