The History of the Book

A new exhibit on the history of the book entitled "Modes of Codex" is currently on at the University of California Santa Barbara Library though through April 29, 2016.

UCSB’s College of Creative Studies (CCS) offers one of the relatively few — and among the most esteemed — degree programs in book arts in the United States.

The ABC of It: Exhibit on Childrens Books at the NYPL

The great green room and the purple crayon are here; so are the wild things and the poky puppy, Charlotte’s web and Alice’s wonderland, the very hungry caterpillar and the stinky cheese man. It is a reunion of creatures, characters and creations, gathered from memories of childhood and parenthood, and celebrated in “The ABC of It: Why Children’s Books Matter,” a remarkably rich new exhibition at the New York Public Library. 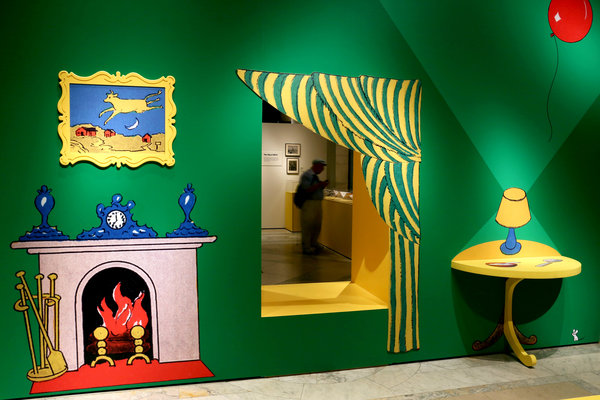 Story and slide show from the New York Times.

Submitted by Bearkat on March 6, 2013 - 3:22pm
Topic:
Technology
Public Libraries
Internet
Exhibits
<BLOCKQUOTE> Getting a glimpse into the curious minds of others has never been so beautiful – or so bright. Designers Brian W. Brush and Yong Ju Lee of <a href=http://eboarch.com/>E/B Office New York</a> created an extensive fiber-optic installation for the <a href=http://tclib.org/index.php/site/news/crowd_packs_new_teton_county_library_lobby_to_celebrate_grand_opening/>Teton County Library grand opening</a> in Wyoming that visualizes library searches in flashes of colored light.

Check out this deck of banned book cards and let us know what your library is doing to celebrate BANNED BOOKS WEEK.

Even though the audio of this episode has the numbering royally screwed up, an interesting look is presented. This is a how-we-did-it sort of episode. As stated in the episode itself: "Consider this a sort of medium-sized Tech for Techies that comes with a side order of curly french fries and a fountain drink."

Smithsonian Censors Itself at the Behest of the Government

The Smithsonian Museum has been under pressure from Catholics and congressmen to pull pieces of an exhibit focusing on homosexuality and homosexual Americans. From NPR:

At least one critic has accused the Smithsonian of caving in to pressure from Catholics and from two Republican members of Congress. Representative Eric Cantor of Virginia called the exhibition "an outrageous use of taxpayer money." A spokesperson for incoming House Speaker John Boehner told The Hill newspaper that "Smithsonian officials should either acknowledge the mistake or be prepared to face tough scrutiny beginning in January."

Out of Many, One. Exhibit on the Religions of Abraham at the NYPL

The sweep of the new exhibition at the New York Public Library — “Three Faiths: Judaism, Christianity, Islam” — is stunning. It encompasses both an elaborately decorated book of 20th-century Coptic Christian readings and a modest 19th-century printing of the Gospels in the African language Grebo. There are Korans, with pages that shimmer with gold leaf and elegant calligraphy, and a 13th-century Pentateuch from Jerusalem, written in script used by Samaritans who traced their origins to the ancient Northern Kingdom of Israel.

The library’s Gutenberg Bible is here, as well as its 1611 King James translation. The first Koran published in English is shown, from 1649, along with fantastical images from 16th-century Turkish and Persian manuscripts in which Muhammad is pictured with other prophets, his face a blank white space in obeisance to the prohibition against his portrait.

Out of many, one. That could well be the motto of this ambitious exhibition. It focuses on “the three Abrahamic religions” — Judaism, Christianity and Islam. One of the main sponsors of “Three Faiths,” is the Coexist Foundation, whose aim is “to promote better understanding between Jews, Christians and Muslims.” (The other main donor is the Stavros Niarchos Foundation.) The display is on view through Feb. 27 at the New York Public Library.

from the Baltimore Sun: Live near Baltimore and looking for something to do on Sunday? Get thee to the library...

Two years after Vilnius, the capital of Lithuania, donated a $50,000 bust of Baltimore-born rocker Frank Zappa, the art will be installed Sunday at the Southeast Anchor Library during a daylong celebration. The audience, which organizers expect to number in the thousands, will include Mayor Stephanie Rawlings-Blake, Zappa's widow, Gail, and one of his sons, Dweezil, who'll be performing with his tribute band, Zappa Plays Zappa. Rawlings-Blake will designate Sunday as Zappa Day, Gail Zappa will host a Q&A and the Creative Alliance at the Patterson will throw an afterparty.

When asked where the bust should be placed, Gail Zappa said she picked a library because her husband was a self-taught man who loved libraries.

A weekend-long celebration featuring live music, a symposium and art exhibit will celebrate the dedication of the Frank Zappa statue in Baltimore, organizers said. A bust of Zappa, a Baltimore native, was a gift from a Lithuanian fan club. After much deliberation, the city decided to place it in Highlandtown, outside the library. His wife said Zappa would have liked the location, because his mother, Rose Marie, was a librarian.

Zappa Plays Zappa, a tribute act fronted by Zappa's son Dweezil, will perform; Zappa's widow, Gail, will give a symposium; and the Southeast Anchor Library will launch an exhibit in conjunction with the Sept. 19 statue dedication, according to producer Sean Brescia.

"Beyond Text and Image: The Book as Art" opens on Thursday, Feb. 25, in Staniar Gallery, Wilson Hall, at Washington and Lee in Lexington, VA. Curated by W&L humanities librarian Yolanda Merrill, the exhibition showcases 30 works by nationally known book artists.

Merrill herself has many years of experience as a bookbinder and bookmaker, and has co-taught a course in the book arts at Washington and Lee. A selection of the student work made in the course is on display in the Lykes Atrium.

The focus of the exhibit is on sculptural books. However, there will also be photographs and other two-dimensional works in the show. Washington & Lee.

Enter exhibition here. Enjoy the elaborate virtual reality exhibition, and follow Yeats development as a poet, a playwright and writer of prose. The National Library of Ireland has the largest collection of Yeats manuscripts in the world, many contributed over the years by his widow and by his son.

Whether you've been naughty or nice...this might be your opportunity to (virtually) meet the man of the moment, Santa Claus, in some of his many incarnations. Clement Moore (A Visit from St. Nicholas) gets the credit. But Washington Irving wrote about a sleigh-riding, gift-giving St. Nick a year earlier, in 1821.

That's one of the fun factoids in the Santa exhibit at the F.M. Kirby Gallery in the Morristown/Township Library. The display includes patriotic, carved Uncle Sam/Santa figurines from the 400-piece collection of former Morristown resident Terese Rolio McCann.

Submitted by Anonymous Patron (not verified) on December 10, 2009 - 10:54pm
Topic:
Academic Libraries
Exhibits
Inspired by the <strong><a href="http://www.lisnews.org/library_christmas_tree_decoration_made_books">December 3 post on LIS News</a></strong>, 3 librarians at the new William H. Hannon Library Loyola Marymount University in Los Angeles decided that their library needed its very own Mansell Christmas tree. <a href="http://www.flickr.com/photos/lmulibrary/sets/72157622977026002/">Check out their handiwork here! </a>

The handwritten letter to former New Mexico Gov. Lew Wallace is polite, articulate and to the point.

"Dear Sir," begins the missive. "I wish you would come down to the jail and see me."

The letter is from Billy the Kid, dated 1881, and it and others like it are now housed at the Fray Angelico Chavez History Library in Santa Fe, NM.
Here's the story.

The Codex Sinaiticus is the oldest surviving Christian Bible, dating from around 1,600 years ago. For all but 100 of those years, it sat in a monastery in Sinai.

800 pages of the book, written in Greek on parchment, are now available online for the world's perusal.

More on this story from the BBC site which includes an audio report about how the Codex was discovered and what it took to put it online.

The Library of Congress' Presents an Online Exhibit "Malice Towards None".

The exhibit commemorates the two hundredth anniversary of the birth of the nation’s revered sixteenth president Abraham Lincoln. More than a chronological account of his life, the exhibition reveals Lincoln the man, whose thoughts, words, and actions were deeply affected by personal experiences and pivotal historic events.

The exhibit will be up through May 9.

Books as Objets D'Art on Exhibit in Minneapolis

Many collectors will tell you that books are works of art. Not just for their words, but as objects of art. Many artists at some point in their careers have made books. The Walker Art Center in Minneapolis is celebrating the book as an art form with it's exhibition "Text/Messages." It features books created by Andy Warhol, Salvador Dali and Kara Walker, among others.

After some quick work using planet, LISFeeds is reborn. LISFeeds is serving as an aggregator portal to podcasts by and for librarians. The sidebar at the site explains more about its new focus and an explanatory release was made.