I would have gotten away with it, too, if it hadn't been for you meddling kids!

(Note: books in picture were not purchased at Amazon.com)

For years, the retailer has been telling Wall Street to ignore how little money it was making and focus instead on the fact that it was bringing in more and more customers and keeping them so happy they never went anywhere else for anything.

In Amazon’s fourth-quarter results, however, investors finally glimpsed off in the distance that growth beginning to flatten. Its revenue rose to $17.43 billion, up 35 percent. Most retailers would die happy with such a jump. But for the e-commerce leader, sales were nearly a billion dollars short of what analysts had been expecting.

And now this. Amazon could be an unstoppable competitor to big publishing houses. If history is any guide, Bezos, who declined to comment for this story, doesn’t care whether he loses money on books for the larger cause of stocking the Kindle with exclusive content unavailable in Barnes & Noble’s Nook or Apple’s iBookstores. He’s also got almost infinitely deep pockets for spending on advances to top authors. Even more awkwardly for publishers, Amazon is their largest retailer, so they are now in the position of having to compete against an important business partner. On the West Coast people cheerfully call this kind of arrangement coopetition. On the East Coast it’s usually referred to as getting stabbed in the back.

Booksellers and publishers are worried that Amazon is going to devour their industry. The giant online retailer seems to have its hands in all aspects of the business, from publishing books to selling them — and that has some in the book world wondering if there is any end to Amazon's influence.

Publishers have a problem when it comes to discussing Amazon: They may fear its power, but they are also dependent on it, because like it or not, Amazon sells a lot of books. But lately, the grumbling about Amazon has been growing louder, with some in the book industry openly describing Amazon's tactics as "predatory."

Why Amazon's Plagiarism Problem Is More Than A Public Relations Issue

Why Amazon’s Plagiarism Problem Is More Than A Public Relations Issue
Plagiarized editions for sale in Amazon’s Kindle store show how the company is still adapting to the world of original content creation. At the same time, the stolen books may also present a test of the retailer’s ability to rely on a widely used legal shield that protects content sites from being accused of copyright infringement.

Nancy Pearl and Amazon.com have struck a deal to republish some lesser recognized titles that are favorites of the Book Lust author and librarian hero.

However, not everyone is thrilled with the idea. As reported in The Seattle Times:

...Overnight, this 67-year-old Seattle grandmother has become a greedy betrayer of the small, sometimes-struggling, bookshops that so supported her. "Yes," says J.B. Dickey, owner of the Seattle Mystery Bookshop about such an assessment. "By aligning herself with Amazon, she's turning her back on independents. Amazon is absolutely antithetical to independent bookselling, and, to many of us, truth, justice and the American way."

If things sound like they've gotten a little heated over Pearl's latest project, they have.

On Wednesday, Amazon.com announced it was issuing "Nancy Pearl's Book Lust Rediscoveries series, a line of Pearl's favorite, presently out-of-print books to share with readers hungry for her expert recommendations."

About six books a year would be published in versions that include print books and eBooks, says the Seattle-headquartered merchandising Goliath that in 2010 had sales of $34 billion, or about $1,077 per second.

Amazon Children’s Book Deal a Low-Cost Route to Growth
While Amazon has made the bulk of its headlines at the end of 2011 thanks to its Kindle Fire tablet, a quieter story about Jeff Bezos’ great machine has been unfolding — one that has seen the company returning to its roots in books. Amazon Publishing, the company’s very own book imprint, has been growing at an exponential rate over the past 12 months. The latest territory taken by Amazon Publishing: children’s books. 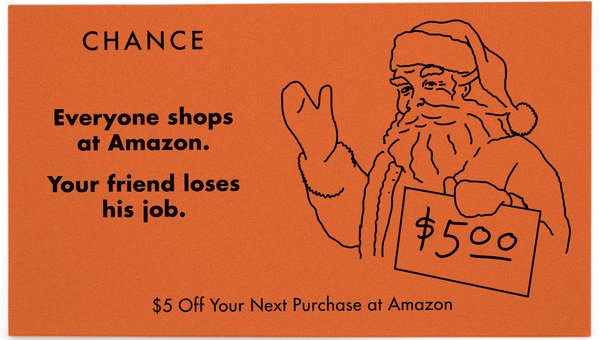 From an op-ed in the NYT Excerpt: Scott Turow supplied lawyerly perspective: “The law has long been clear that stores do not invite the public in for all purposes. A retailer is not expected to serve as a warming station for the homeless or a site for band practice. So it’s worth wondering whether it’s lawful for Amazon to encourage people to enter a store for the purpose of gathering pricing information for Amazon and buying from the Internet giant, rather than the retailer. Lawful or not, it’s an example of Amazon’s bare-knuckles approach.”
Topic:
Amazon.com

Amazon's decision last week to purchase 450 children's book titles from Marshall Cavendish has left librarians wondering how the ecommerce giant will handle the books' distribution channels, and whether they'll still be available from independent bookstores and major library suppliers such as Follett, Mackin and Baker & Taylor.

Competing with Amazon is not an easy thing to do

Amazon has three pretty powerful things going for them, and two are entirely their own doing.

Number one: Amazon is, by far, the most book-industry-focused company that is actually active in endeavors much larger than the book business.

Number three: Amazon is the runaway market leader in the only two segments of the book business that are growing — ebooks and the online purchasing of print — and they are cleverly leveraging the leadership position they have to make challenging them even more difficult in the future.

Details on the three points

The Penguin move should be seen not as corporate verdict on libraries, but as a reaction to Amazon's entry into the library market. When Overdrive was distributing content to libraries on their own platform, the publishers were able to view Overdrive, and libraries in general, as a counterweight to Amazon. But the extension of Overdrive lending to the Kindle flipped libraries into the Amazon column. That's the best way to understand the Penguin decision, though you won't see them saying that.

The goal of leveling the playing field between brick-and-mortar retailers and online retailers came a step closer Wednesday with the introduction of the Marketplace Fairness Act by a bipartisan group of ten senators led by Mike Enzi (R-Wyo.), Dick Durbin (D-Ill.), and Lamar Alexander (R-Tenn.). If enacted, states would be able to collect the sales taxes they are owed under current law from out-of-state businesses, rather than rely on consumers to pay those taxes to the states.

“Amazon strongly supports enactment of the Enzi-Durbin-Alexander bill and will work with Congress, retailers, and the states to get this bi-partisan legislation passed,” added Paul Misener, Amazon v-p of global public policy. “It’s a win-win resolution.” Amazon has staunchly oppossed state-by-state tax initiatives, but said it would back a national policy.

And so, it begins.

Will Amazon Kill Off Publishers?

Laura sent over a link to Will Amazon Kill Off Publishers?
Amazon is getting a lot of heat these days over its attempts to push its way into the hearts and minds of readers, writers and the larger book culture -- even comic books. Indeed, the news last week that Amazon would aggressively expand its publishing efforts by signing up authors has ruffled the feathers of many agents and publishers.

Will Amazon's plan shake up the book publishing industry as more writers have the option of a one-stop shop: agent, publisher and bookseller? Are publishers still needed?

Story about Amazon lockers in NYC. These lockers allow for packages to be delivered to a locker. Buyer is given a code to open the locker. I assume these are for people that do not have a good drop off location at their apartment.

MediaBistro reports: The venerable British Library is being criticized this week for a new suggested sales platform that it is currently testing. The online catalog for the British Library now includes an extra link on most book listings. In addition to request reserve, and checkout a title, patrons can now also find the book on Amazon.co.uk. If Amaozn doesn’t have the title then the page lists a “More titles to consider” link instead.

Naturally this has Amazon’s competitors up in arms. Johnny de Falbe, co-owner of London’s Sandoe bookshop, had this to say: “The British Library, a public institution, should not be offering this link to Amazon, which is not (last I heard) a public institution. And if the British Library, of all people, are not supporting British bookshops, and positively steering business away from independents, then why should anyone else have any faith, or interest, in independents?”

And he’s not alone. James Daunt, managing director of Waterstone’s, was not pleased with the development, saying: “It’s disappointing to say the least that a very British institution is driving readers away from local libraries and high street bookshops."

The British Library is on the record as saying that this was not a deliberate choice; it’s the default option for the platform offered by ExLibris, the company who built the British Library’s website.

In E-Reader Battle, a Superhero Slugfest Among Booksellers

Amazon made an exclusive tablet deal with DC, so Barnes & Noble and Books-a-Million removed its graphic novels from their shelves.

Amazon's grip tightens on the entire book-publishing chain
Amazon's low-priced bestsellers and Kindle e-reader are famous for changing the book industry. What's not so well known is how deeply Amazon's tentacles reach into all parts of the industry, including its growing interest in inking deals with authors to publish some of the hit books Amazon sells.

Submitted by Bibliofuture on September 28, 2011 - 5:08pm
Amazon has announced the new Kindle Tablet. It will be called the Kindle Fire. You can see it here. ($199) There were other new Kindles announced today. There is a Kindle Touch and there is a wi-fi Kindle that is $79. Kindle $79 Kindle Touch wi-fi $99 Kindle Touch 3G $149
Topic:
Ebooks
Amazon.com