A U. of California Librarian asks: What happened to the American flags on the moon?

Submitted by Bearkat on July 5, 2011 - 10:52am
Topic:
Must Read Stories
Academic Libraries
Hyperlinked History
Activities In Libraries
"As a symbol of the Fourth of July holiday, it is easy for the conversation this time of year to turn to iconic American flags, like the flag the Marines raised at Iwo Jima; the one firefighters put up at ground zero; and the one that flew over Fort McHenry and was the inspiration for what would become our national anthem." "As the space shuttle program comes to an end this week, CBS News decided to look into the flags the astronauts left behind on six trips to the moon.

Maybe they thought they were searching for their guilty pleasures in private, those adults at Monona (WI) Public Library combing the shelves for young adult novels. But they didn’t go unnoticed by librarian Toni Streckert.

She welcomed them in, recommended titles and now has created a book club just for them: Grown-ups who know there is not a more sparkling, compelling short read than a well-written teen novel.

“They have some of the most exciting, concise writing,” she said. “Teens don’t have a long attention span, so your writing has to be so crisp, so polished.”

A dozen people showed up for the first meeting of the library’s new teen-book club, most in their 30s to 60s. Only a couple were parents of a teenager, Streckert said. More from Madison.com.

Suggested courses for addition to the library school curriculum

LIS707 – Organization of Information Materials by Cover– 3 credits
Dewey Decimal and Library of Congress classification systems are disregarded in this study that focuses on the concerns and techniques of organizing items by cover and the modern library users’ information-seeking behavior. Concentrates on the understanding and application of this in demand trend, including how to separate colors and the differences between scary and sexy vampires.

Rachael Morrison: Having a job as Senior Library Assistant at The Museum of Modern Art Library has been a big influence on my artistic practice. I use the library for research and inspiration, and as a site of investigation. In early 2010, I began the performance “Smelling the Books“, which consists of me smelling every book in the MoMA Library collection. This performance was recently highlighted in New York Magazine as one of the many reasons to love New York. My performance started with the first call number in the Library of Congress classification system AC5.S4 1934, Sermons by Artists, and I will smell until I reach ZN3.R45, Bibliography of the History of Art. I document the performance in a ledger, recording the call number, title, and a description of the smell of each book. The goal of this personal olfactory exploration is to foster a discussion of the future of print media, the ways we read, methods of classification, and the way in which smell is entwined with memory. 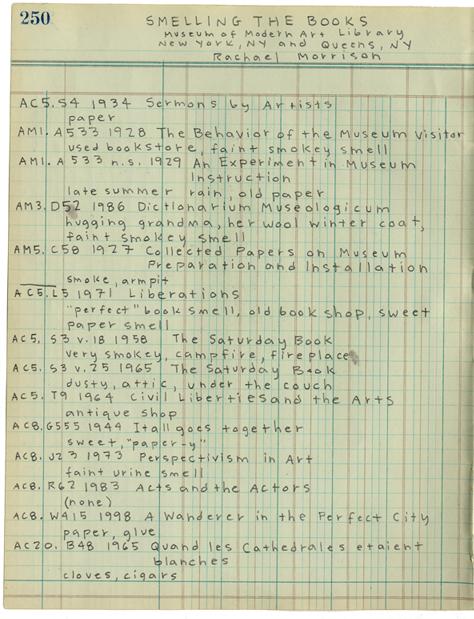 Growing Knowledge: The British Library launches its strategy for 2011-2015

The British Library has launched its new strategy, setting out how it plans to develop its collections and services over the next four years.

Growing Knowledge: The British Library’s Strategy 2011-2015 outlines the UK national library’s key objectives and strategic priorities to the middle of the decade, and emphasizes the need to deliver more for less in a challenging economic climate.

The art of giving instructions: 7 practices for facilitators

Librarians frequently find themselves in the role of facilitator. This blog post by Chris Corrigan has some tips about giving instructions, an often overlooked art.

Speed-dating at the Library

Submitted by sbirkens on February 4, 2011 - 3:04pm
Topic:
Activities In Libraries
Yet another reason to go to the library: speed-dating! The San Francisco Public Library sponsored an event in which participants were encouraged to start their conversations with a book in their hand. It was a mixed success. Read the story <a href="http://www.sfgate.com/cgi-bin/article.cgi?f=/c/a/2011/02/04/BAI21HIHQ5.DTL">here</a> from the San Francisco Chronicle.

Why I didn't buy a Kindle (hint: no library support)

It's cool! It's hot! It's happening!! From The Beat of Young Los Angeles:

Sure, everyone's always preaching about how we should save our public libraries, and obviously there's really no reason not to want to save your local library -- free books, entertainment, childhood memories, those poor librarians. But admittedly, it can be difficult to think of something that you could do that would actually help out the public spaces.

But now there's this: the Library Foundation of Los Angeles is taking steps to make the library cool again by hosting "This is Your Library." It's supposed to be the beginning of a new series of "late-night talk show-like events," featuring discussions with prominent people from and about the wonderful city of Los Angeles. There'll also be live music, DJs, food trucks and a bar, and overall just a good time hanging out at the library at night, appreciating L.A. Supporting the library can be pretty easy, right?

The popular pursuit of library sex

Submitted by Anonymous Patron (not verified) on September 23, 2010 - 4:59pm
Topic:
Activities In Libraries
<a href="http://jezebel.com/5645211/the-popular-pursuit-of-library-sex">The popular pursuit of library sex</a> According to the latest Best of Craigslist, stack-nookie is a recurring dream for many. If only it were just a dream.

Submitted by birdie on September 16, 2010 - 9:20am
With all the doom and gloom, Sean Bonney, Graphics Designer at the Central Rappahannock Regional Library put together this video to cheer us up. The video follows one member of the staff as she deals with a string of bizarre patrons. About halfway through, a fabulous disco sparkle segues to our music video, set to the 1978 disco hit, "I Will Survive".
Topic:
Public Libraries
Money Issues
Libraries
Librarians
Friday Funnies
Activities In Libraries

International Literacy Day, traditionally observed annually on September 8, focuses attention on worldwide literacy needs. More than 780 million of the world’s adults (nearly two-thirds of whom are women) do not know how to read or write, and between 94 and 115 million children lack access to education.

Celebrate International Literacy Day by joining IRA on either September 7 or September 8 for webinars on Building Support for Effective Reading Instruction featuring IRA President Patricia Edwards, Richard Carson (Rotary Representative to the OAS) and Instructor Judy Backlund (IRA member and Rotary Club President). The webinar will be held twice, so choose the time that works best for you!

Other live events, fact sheets, celebration ideas and award certificates can be found at the IRA Website.

As we learned last April, Rolling Stones guitarist Keith Richards has always had a secret ambition...to be a librarian.

And today, as reported in Penn Live, Librarian Sheila Redcay — and at least 480 others on Facebook — would like to have Rolling Stones guitarist Keith Richards visit Matthews Public Library in Fredericksburg, PA. Redcay, a lifelong Rolling Stones fan, decided to invite Richards to her library after reading a preview of his autobiography, "Life," coming out in October, in which he says he considered becoming a librarian.

“Having him come to a public library, wherever it may be — why not here — will just simply bring awareness to the many struggles many libraries are having just to keep their doors open." Her goal is to get 1,000 people as members of the Facebook page she created, Keith Richards, Please Have Sympathy for America’s Public Libraries, after which she will approach his manager again with an invite. Richards’ manager said it sounded like “a very good idea,” but his publicist has said he is adamant that he will do only one book signing, in New York City. C'mon Keith...

There's a little contest on the Facebook page...join up and check out your knowledge of the Stones.

Preserving the Tradition of the Charro in Salinas

On a warm, summer afternoon, a father and son strode onto the lawn in front of the Cesar Chavez Library in Salinas, dressed resplendently in traditional Mexico charro costumes.

The pair entertained the crowd of 55 community members who gathered outside the library with lasso and rope tricks. Celerino Esparza, 17, spoke about learning the 400-year-old Mexican art from his father, Jesús Esparza, and how "we all have options in life here in Salinas, and his never involved gangs or violence, but the traditions of his family," said Carissa Purnell, a librarian at Cesar Chavez Library.

Like many of his countrymen, Jesús earns a living by working in landscaping and general construction. Still, he works hard to pass on his Mexican culture to Celerino and his four older daughters.
Jesús and Celerino are organizing charro classes for the children in neighborhood surrounding Cesar Chavez Library, and hope to teach them how to mount and ride a horse, and use a lasso.

"It's a beautiful sport," Celerino. "It's important to carry on the customs and tradition of your culture."

PORTSMOUTH NH — Thousands of bookmarks promoting two organizations’ points of view recently created a headache for public libraries on the Seacoast. The two groups were the School Sucks Project and Freedomain Radio.

The School Sucks Project Web site calls for an end of public, government-funded education in the United States, charging that it is ineffective and values obedience over creativity. Freedomain Radio bills itself as a philosophical radio show.

It’s not a new phenomenon at libraries, but Portsmouth Public Library Director Mary Ann List said several in the area were hit recently with a scourge of bookmarks promoting an unspecified political cause between the pages of books. The messages tend to be politically or religiously focused, she said, and libraries typically strive to remain disassociated with that type of propaganda.

The latest dispersal was the largest Cathleen Beaudoin said she has ever seen. The Dover Public Library director said, while she’s found pamphlets and the like within small groups of books in the past, as well as such oddities as a $100 bill, an endorsed paycheck and a strip of bacon, nothing could match the number of stuffed books (over 5,000) that cropped up in May.

Are You Ready for National Library Week?

It's next week! This theme for this annual event is "Communities Thrive". Here's what we've found for events around the country: