The Librarian Is The Rock Star 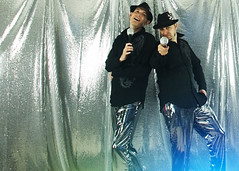 From David Lee King's blog: "About a year ago, I tweeted this:

But I leave u with this to ponder: are your librarians your rockstars in your community? Should they be? If so, how do u get there?

Here’s where I was going with that tweet: Awhile back, my library’s Communications Specialist said this to one of our librarians, who was worried that an article in our library newsletter focused a bit too much on her. Our Communications person said this (summary) “yep – my goal is to make YOU the rockstar, not me.”

I thought that was an insightful statement. Our marketing person realized that one HUGE asset our library has, and therefore our community has … are our librarians. So we sometimes need to focus on our staff, rather than just on our stuff.

Why NOT “showcase” some of our fine staff a bit? We do that with all our other important, cool stuff, right? Our Harry Potter books and movies were all over some of our websites a few years ago. We make banners for important author events. We turn our “stuff” into the attraction (which makes sense – people come for our stuff)."

Remind Your Patrons: Take A Good Idea From DropBox

Aaron Schmidt: Here’s what Dropbox sends when someone who signed up for the service hasn’t recently used it. These go out only occasionally (from what I understand, I don’t think I’ve ever not used it since signing up!) so it isn’t overbearing or terribly spammy. Plus? It is short, easy to read and rather engaging.
Are any libraries sending out email prompts like this when someone hasn’t used their library card?

On Wisconsin!! Six Out of Ten Wisconsonites Are Library Card Holders

Many people can't afford to spend money on luxury items these days. They're forced to spend their cash on food and rent instead of books, DVDs, and magazines.

And that's why many Wisconsin residents (dare I say cheeseheads?) are turning to their local library for entertainment.

If you never visit your local library, it's time to jump on the bandwagon and catch up with your neighbors. That's because 6 out of every 10 Wisconsin residents are now registered library users. According to the Department of Public Instruction, Wisconsin has one of the best-organized library systems in the country. And most people are taking advantage of it.

Many are forgoing expensive bookstores, and instead are hitting up libraries for free access to their favorite stories.

Marathon City's old library was so popular, they had to move to a brand new building to keep up with customer demand.

"The old building we had was very small in footage," says branch supervisor Lavone Runge. "It was not customer friendly. We couldn't increase our materials because we just didn't have the shelving space."

Dave Farrow, who overcame dyslexia and ADHD to become a world-famous speed reader and Guinness World Record holder, is living and reading in a front window display at the Sony Centre in Toronto. For every book he reads, Sony will donate 2 Reader™ digital books to public libraries across Canada. Watch live on Facebook.

Beginning this past Tuesday, consumers were and are invited to view Farrow's progress and additional world record attempts online (also via Facebook). If you're in the Toronto area, you can also visit the newly renovated Sony Centre for the Performing Arts in person at One Front Street East in Toronto at the south-east corner of Yonge and Front Streets, where Farrow will be reading and living from September 7 through 24th. Consumers who visit the Sony Centre can receive an in-person demonstration of the new Reader Pocket and Touch Editions, "relief-read" for Dave Farrow, enter to win great prizes, and enjoy free frozen yogurt bars from 10:30-1pm daily.

Submitted by Pete on July 30, 2010 - 10:35am
Topic:
News
Books
Marketing
Todays <a href="http://www.wired.com/thisdayintech/2010/07/0730penguin-paperback-books/">This Day in Tech blog</a> from Wired relates how today Penguin publishes the first paperback books of substance, bringing the likes of Ernest Hemingway, André Maurois and Agatha Christie to the masses. "Allen Lane, then with publisher The Bodley Head, had spent the weekend at the country estate of celebrated mystery writer Agatha Christie.

How Libraries Stack Up

Meanwhile (awaiting their day in court), OCLC has published a terrific two-page pdf document on "How Libraries Stack Up".

Kathy Dempsey 'speaks about' an interesting presentation she heard in April at the Texas Library Association's annual conference. This talk was given by Wayne Disher, director of Hemut Public Library in Hemet, Calif.

Submitted by birdie on July 14, 2010 - 1:10pm
Major congratulations are due to LISNews author Andy Woodworth and fellow librarian tweeps, who got the Old Spice Guy to do a tribute to libraries... Check it out on YouTube!
Topic:
Libraries
Marketing

What is a Public Library?

Submitted by birdie on June 18, 2010 - 12:50pm
Via Via Bobbi Newman's Librarian by Day , the answer to to question above (parodying the iPad commercial):
Topic:
Marketing
Prison Libraries

Which Library Systems Are Facing Major Cuts? Let Us Know...

Lori Reed, creator with Heather Braum of the website Save Libraries is preparing background for a news story on which library systems are facing cuts. We could use your assistance and make the biggest impact and the loudest entreaties to budgetary decision-makers with a near complete list of libraries facing cuts.

Apart from the states of New York and New Jersey, San Jose CA, Boston, MA Charlotte NC and Jacksonville, FL...please let us know what other state, city or regional systems may have to be cut back or cut out by adding your comment below.

From The Item, BISHOPVILLE SC - For the third time in four years, the Lee County Public Library has won top honors in the State Library's Annual Photo Contest: Day in the Life of South Carolina Libraries.

The library also won the Best Humorous Photo Award with Snyder-Powell's photo of a youngster asleep in the library.

Getting on the 'Sex Sells' Bandwagon

Want to keep up on what's happening with efforts around the country to help save libraries? There's a great new site for that, appropriately named Save Libraries. Their motto is "When one library is in trouble, ALL libraries are in trouble." This project is being run by Lori Reed and Heather Braum. They can’t do this alone and are looking for additional help creating and maintaining the content on this site.

Please email us at savelibs (at) gmail (dot) com for questions, comments, or concerns. Please tag your Web content with savelibraries to make it easier for us to find and collect it.

Kudos to none other than our own Blake Carver and LISHost.org for donating hosting for this site and getting WordPress up and running within minutes. This site is dedicated to advocacy for libraries–getting the message out about why libraries are important.

We’re looking for advocacy information, testimonials from patrons and staff, photos, videos, anything to help save our libraries. Please pitch in!! Use the tag savelibraries or #savelibraries on Twitter. If you would like to contribute to this site please email [email protected].

Are You Ready for National Library Week?

It's next week! This theme for this annual event is "Communities Thrive". Here's what we've found for events around the country:

According to NFI Research, these are the top public libraries on Twitter who

Some people use and support the public library, no matter what. They visit the library regularly, borrow books, take the kids to story time, join the Friends, and visit new libraries on vacation. Let's call them the Fans.

At the other end of the spectrum, there are people who never use the library, no matter what. They have their reasons. We could call these the Frosties. Between the two extremes, there's a broad range of library use patterns.

Here are some numbers taken from a 2006 study titled Long Overdue: A Fresh Look at Public and Leadership Attitudes About Libraries in the 21st Century. When asked how many times they visited a library in the previous year, survey respondents replied with these frequencies:
Not at all - 27%
1-5 times - 15%
6-10 times - 11%
11-25 times - 16%

How can we convert library Frosties to Fans? And how can we engage the people who use the library once a year to use it more often? I'm convinced that a great many of the Frosties have needs and interests that could be met at the library, but they are simply unaware of specific services that could help them.

In libraryland, there are a lot of statistics that are measured: door counts, circulation of items, computer uses, reference questions, and so forth and so on. As I was getting ready for the end of the year marketing committee for my library system, I couldn’t help but think about some of the things that cannot be tracked. Specially, I wondered about the number of conversation opportunities that are missed by staff members.

She Signed Up for a Library Card, but Got a Lot More

Gig Harbor, WA: When Marie Bassett received a phone call from the Pierce County Library System telling her she had won a free laptop computer, she first thought it was a hoax.

Bassett filled out a little piece of paper when she renewed her library card a while back, but she had forgotten about it.

The countywide library system held a raffle for two laptops during its annual card drive, and Gig Harbor’s Bassett won one of them.

“It was a funny story,” she said. “I went to have my library card renewed, and they had me fill out this little slip of paper. I said, ‘What do you want me to do with this?’ ”

Bassett said she regularly checks out items at the library with her husband, and she decided to get her own card updated. “I thought, ‘That’s dumb. I might want to go without him some time,’ ” she said. “It’s ironic, because I’m really a raffle nut, but I had totally forgotten I had filled out this slip.”

Winning the laptop turned out to be perfect timing for Bassett, who recently lost her job.

“It was a heartbreaker,” she said. “It was truly a dream job. I thought I was going to be there forever.”

Nonetheless, Bassett hopes to turn bad luck around. “Now I think I want to start my own bookkeeping business,” she said. “This laptop is so timely.”

Mary Simun did not enjoy reading as a child. But in college, she discovered her love of reading, and hasn't stopped yet.

Does your library have FOL store? or a Friends group? Share news of how they've helped your library...