Abstract: This article is a short (well, not that short) summary of our experiences in writing a free online text book known as Operating Systems: Three Easy Pieces (OSTEP for short, and sometimes pronounced "oh step"). It has been developed by myself (Remzi Arpaci-Dusseau) and my wife (Andrea Arpaci-Dusseau) over the past many years while teaching CS 537, the undergraduate Operating Systems course at the University of Wisconsin-Madison. The chapters of the book have been downloaded over 1/2 million times since 2012, and the web page for the book has been viewed nearly 3 million times in the past year, including a recent burst thanks to Hacker News and Reddit. In discussing our experiences, we make the case for Free Online Books (FOBs) - a now-serious alternative to classic printed textbooks.

From The Case for Free Online Books (FOBs): Experiences with "Operating Systems: Three Easy Pieces" | From A To RemZi

These may sound like stories of concern to academics alone. But the problem is this: much of the time that goes into writing these books is made possible through taxpayers’ money. And who buys these books? Well, university libraries – and they, too, are paid for by taxpayers. Meanwhile, the books are not available for taxpayers to read – unless they have a university library card.

ABSTRACT
The quality of web sources has been traditionally evaluated using
exogenous signals such as the hyperlink structure of the graph. We
propose a new approach that relies on endogenous signals, namely,
the correctness of factual information provided by the source. A
source that has few false facts is considered to be trustworthy.
The facts are automatically extracted from each source by information
extraction methods commonly used to construct knowledge
bases. We propose a way to distinguish errors made in the extraction
process from factual errors in the web source per se, by using
joint inference in a novel multi-layer probabilistic model.
We call the trustworthiness score we computed Knowledge-Based
Trust (KBT). On synthetic data, we show that our method can reliably
compute the true trustworthiness levels of the sources. We
then apply it to a database of 2.8B facts extracted from the web,
and thereby estimate the trustworthiness of 119M webpages. Manual
evaluation of a subset of the results confirms the effectiveness
of the method.

From Knowledge-Based Trust: Estimating
the Trustworthiness of Web Sources [PDF]

The Cartographer Who's Transforming Map Design

Brewer, who chairs the geography program at Penn State, is a popular figure in part because she has devoted much of her career to helping other people make better maps. By bringing research on visual perception to bear on design, Brewer says, cartographers can make maps that are more effective and more intuitive to understand. Many of the same lessons apply equally well to other types of data visualization.

From The Cartographer Who's Transforming Map Design | WIRED

In the face of these changes, academic librarians have no choice but to take action. Their challenge, though, is that there are simply too many print books and not enough on-campus space to store them.

The most obvious solution to too many books is “weeding,” the library profession’s term for removing books from a collection. While weeding creates space for new books, it has significant labor and disposal costs. Also, it can meet with stiff resistance from faculty and students.

In the face of these changes, academic librarians have no choice but to take action. Their challenge, though, is that there are simply too many print books and not enough on-campus space to store them.

The most obvious solution to too many books is “weeding,” the library profession’s term for removing books from a collection. While weeding creates space for new books, it has significant labor and disposal costs. Also, it can meet with stiff resistance from faculty and students.

The Heart of the University: MU Libraries celebrate the centennial of Ellis Library

"More than a century ago, the University of Missouri’s first professionally trained librarian, James Thayer Gerould, campaigned for a building to house the library’s books. The collection was relatively small; all of the books, except the few on loan, had been destroyed in the Academic Hall fire of 1892...Today, the structure houses nearly 2 million print volumes."

“It’s hard for me to think of another profession that has been more fundamentally changed than librarianship,” says Director of MU Libraries Jim Cogswell. “Librarians have always said they are trying to do the impossible, which is to try to take all of the world’s recorded knowledge and information and make it available to anybody at any time. That’s crazy. How could anybody ever do that? But with every iteration of technology, we get closer.”

According to a Princeton Review survey that asked 136,000 students at 380 top colleges to rate their schools on dozens of topics and report on their campus experiences, the school at which students gave their professors the highest marks was Swarthmore College (PA). "Best College Library" – Yale University (CT)

Submitted by Anonymous Patron (not verified) on August 4, 2015 - 10:44am
Topic:
Academic Libraries
https://www.mtholyoke.edu/media/rare-images-reveal-early-womens-college-life ount Holyoke College has just digitized some 2,000 rare and beautiful photographs that document life at the College from 1899 to 1939. The entire collection is now available for research and enjoyment online. The images were originally captured on glass-plate negatives by Mount Holyoke botany professor and photographer Asa Kinney. For more information about the collection: http://asakinneyproject.blogspot.com/ Regards, James Gehrt Digital Projects Lead Mount Holyoke College

After 20 years, Stanford Encyclopedia of Philosophy thrives on the web

Launched two decades ago, years before Wikipedia existed, the site led the way in academic information sharing. It now includes 1,478 authoritative and vetted entries about all manner of philosophical topics. It is updated almost daily, thanks to about 2,000 contributors.

The encyclopedia averages more than a million Internet hits per week. Users include students, scholars, librarians and even military officials.

From After 20 years, Stanford Encyclopedia of Philosophy thrives on the web

The main Hesburgh Library is in the midst of a major renovation. The gift will be used in part to fund renovation of the future home for the Navari Family Center for Digital Scholarship in that building, as well as to establish an endowment to support digital library services and research projects related to the center, the university announced Friday.

Birkbeck, University of London has been awarded a three-year grant of $741,000 from the Andrew W. Mellon Foundation to cement and expand a new model for open-access publishing in the humanities disciplines.

“We are entering a new era in publications”, said Koen Becking, chairman of the Executive Board of Tilburg University in October. On behalf of the Dutch universities, he and his colleague Gerard Meijer negotiate with scientific publishers about an open access policy. They managed to achieve agreements with some publishers, but not with the biggest one, Elsevier. Today, they start their plan to boycott Elsevier.

The University of Iowa has struck gold. Not the kind that lies in the federal reserve, but one of paper in a Sioux Falls man's basement. After 20 years of collecting, he is donating his one-of-a-kind collection of 17,500 books worth an estimated three quarters of a million dollars.

Unsurprisingly one can see the concentration of pre-1600 European manuscript holdings along the east coast. In a league table of manuscript holders New York, Washington, and Philadelphia(!) come out on top by volume but in terms of individual institutions the Huntington and Folger with their extensive holdings of pre-1600 documents come out on top.

From Mapping Books: Mapping pre-1600 European manuscripts in the U.S. and Canada

The all things Science Fiction site, i09, tells of an interesting find at the University of New Brunswick library,

"File this under “Why we need libraries and librarians”: A copy of the original shooting script for Star Wars Episode IV was found sitting on a shelf in the University of New Brunswick’s library in Saint John. And it may settle whether or not Han shot first."

As of June 30, the celebrated historian, digital library pioneer, and champion of books will leave the University he first saw as an undergraduate in 1957. A scholar of Enlightenment France and of the history of the book, he returned to Harvard in 1965 to join the Society of Fellows, decamped to Princeton University in 1968 for 39 years, and came back to Harvard in 2007.

There's a New Chick at the Library

...a peregrine falcon chick that is.

MassLive reports that a baby chick has hatched on the rooftop of the W. E. B. DuBois Library at the U of Mass. There appear to be a few more still incubating. 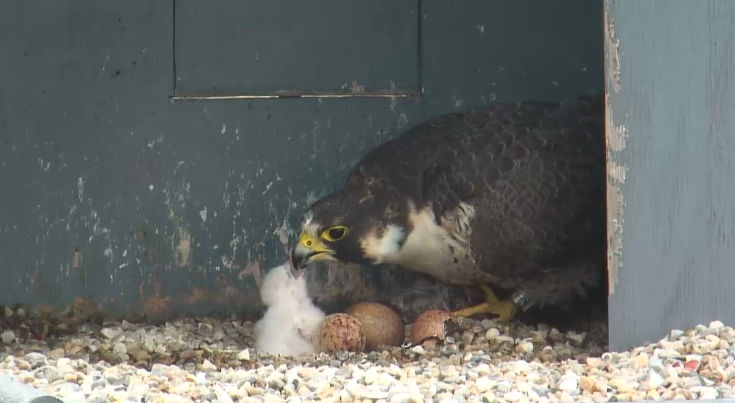 The hatching was announced on Twitter, with photos taken from the library's falcon webcam . Enjoy!

From 2Paragraphs (written for the modern attention span):

500 Questions is the new TV quiz game where contestants try to answer a series of rapid-fire questions. The show is being broadcast for seven consecutive nights. Tonight, May 27 is the sixth night (8pm on ABC). .

The contestant who came closest to answering all 500 Questions was librarian Steve Bahnaman. The affable, knowledgeable man works at the Campbell University library.He planned to get a PhD in religion but “that ended up not being something I wanted to do.” Turns out he preferred “being around research and helping people with research.” Bahnaman will return to his job $110,000 richer after answering 167 of the 500 Questions.