Is Amazon taking over the academic library industry? That's what a new study from a higher-education-focused non-profit takes a look at, and their findings might surprise you as long as you haven't read the title of this article too closely. For the study, Ithaka S+R gathered acquisitions data from 124 U.S. higher education institutions in fiscal year 2017 along with data from 51 institutions covering between 2014 and 2017. The report has more than one interesting takeaway about the under-examined world of academic literature, but here's the big one: Amazon isn't anywhere close to controlling the academic library market.

The findings of this report consist of two distinct areas: 1) an analysis of library book acquisitions within the specified sample for fiscal year 2017 at 124 US academic institutions, and 2) a trend line analysis of print and e-books acquired within the specified sample, the university press presence in these libraries, and the leading vendors of books at 51 US academic institutions for fiscal years 2014 through 2017. While these samples are not representative, they afford a broader overview of the acquisitions patterns and practices of US academic libraries than we believe has ever been conducted to date.

AT UCLA, They're Building Maps for Puerto Rico Hurricane Relief

Submitted by birdie on October 6, 2017 - 3:48pm
A program has sprung up at UCLA to build maps for hurricane relief. 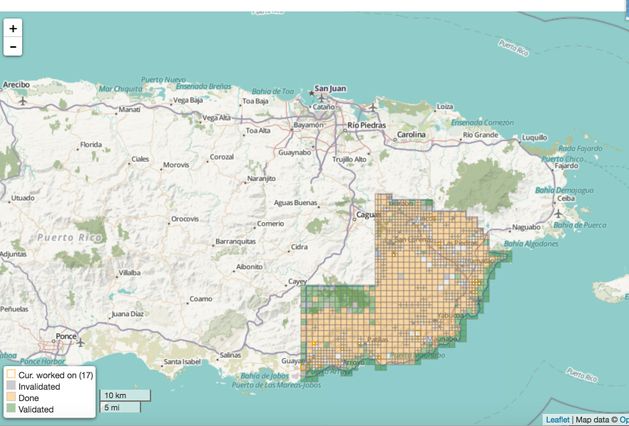 The mapathon activities were scheduled for today, October 5 at the Young Research Library. Volunteers will help add building locations to maps of the island. These maps will be used by the Red Cross and other relief agencies.

No experience, knowledge of Puerto Rico’s geography or software installation was required. Participants were asked to just bring a laptop and library staff and UCLA’s Institute for Digital Research and Education geographic information systems experts will teach them how to help with these efforts through some easy-to-learn mapping tasks in a web-based application.

Is the staggeringly profitable business of scientific publishing bad for science?

The core of Elsevier’s operation is in scientific journals, the weekly or monthly publications in which scientists share their results. Despite the narrow audience, scientific publishing is a remarkably big business. With total global revenues of more than £19bn, it weighs in somewhere between the recording and the film industries in size, but it is far more profitable. In 2010, Elsevier’s scientific publishing arm reported profits of £724m on just over £2bn in revenue. It was a 36% margin – higher than Apple, Google, or Amazon posted that year.

From Is the staggeringly profitable business of scientific publishing bad for science? | Science | The Guardian
Topic:
Academic Libraries

What it was like to be peer reviewed in the 1860s

That path from submission to revision and publication will sound familiar to modern scientists. However, Tyndall’s experience with the Philosophical Transactions—in particular, with its refereeing system—was quite different from what authors experience today. Tracing “On the absorption and radiation of heat” through the Royal Society’s editorial process highlights how one of the world’s most established refereeing systems worked in the 1860s. Rather than relying on anonymous referee reports to improve their papers, authors engaged in extensive personal exchanges with their reviewers. Such a collegial approach gradually lost favor but recently has undergone something of a resurgence.

From What it was like to be peer reviewed in the 1860s
Topic:
Academic Libraries

Submitted by birdie on May 3, 2017 - 1:21pm
It's happening all around the country. Librarians are teaching patrons and students how to detect "fake news".

In Seattle WA: From King5 News.

Do you know of other libraries informing their patrons how to spot "fake news"? Let us know in the comments.

Beyond reading this report and preprint, what can we do to learn more and help protect our patrons’ privacy (and our own)? Keeping up with these issues is a good first step.... We can also work to audit our own internal library systems and practices, and to push the vendors we work with to protect patron privacy. Further, we can increase digital privacy awareness among ourselves, our coworkers, and our patrons.

Harvard libraries will no longer charge 50 cent per day fees on overdue books. The change, one of several detailed in a post on the Harvard Library system’s website, went into effect on April 1. Though standard fees have been eliminated, fees for overdue recalled material have been raised from two dollars a day to three dollars a day, with a 45 dollar maximum. “The goals of these changes are to improve the student experience and embrace a ‘One Harvard’ approach for borrowing material across Harvard Library,” wrote Steven Beardsley, Harvard's associate director for access services administrative operations and special projects, in an email.

What's an Entrepreneur Librarian? An Explanation

Submitted by birdie on March 8, 2017 - 10:37am
From Canada's University Affairs Bulletin, an article by Carey Toane about his newly appointed role as an an entrepreneur librarian.
Topic:
Academic Libraries
Librarians

Submitted by birdie on December 28, 2016 - 10:07am
From Mercury News, a math professor protests after the library rids itself of a majority of its book collection.
Topic:
Academic Libraries
Libraries

Submitted by rteeter on December 27, 2016 - 12:52pm
Topic:
Academic Libraries
Over the summer, workmen removed most of the remaining books from our Science and Engineering Library at the University of California at Santa Cruz. Roughly 80,000 books, worth between $2-$6 million were destroyed or shipped off campus to distant storage facilities. The act was taken with virtually no faculty input. More at: <a href="http://www.mercurynews.com/2016/12/24/montgomery-on-ucscs-outrageous-mass-destruction-of-books/">http://www.mercurynews.com/2016/12/24/montgomery-on-ucscs-outrageous-mass-destruction-of-books/</a>

Contrary to what a couple of people I talked to at the time intimated might happen, my scientific world didn’t immediately collapse. The only real consequences I’ve experienced as a result of avoiding Elsevier are that (a) on perhaps two or three occasions, I’ve had to think a little bit longer about where to send a particular manuscript, and (b) I’ve had a few dozen conversations (all perfectly civil) about Elsevier and/or academic publishing norms that I otherwise probably wouldn’t have had. Other than that, there’s been essentially no impact on my professional life. I don’t feel that my unwillingness to publish in NeuroImage, Neuron, or Journal of Research in Personality has hurt my productivity or reputation in any meaningful way. And I continue to stand by my position that it’s a mistake for scientists to do business with a publishing company that actively lobbies against the scientific community’s best interests.

From Why I still won’t review for or publish with Elsevier–and think you shouldn’t either – [citation needed]
Topic:
Academic Libraries
Libraries
Publishing

It's Not Too Late to Save the Stacks

For in-depth assignments, nothing replaces the chance to introduce students face-to-face to a nonvirtual librarian who can help them navigate the research process. One invaluable lesson of standing next to a real person undertaking real-time information browsing: Students learn that good information takes time to locate. Even the experts have to problem-solve through some deadends and overgeneralized hits before finding a good source. And when something suitable turns up, students can share that eureka moment or the relief of genuine gratitude with another person. All of this takes place in the physical space of the library and its community of books and people.

From It's Not Too Late to Save the Stacks - The Chronicle of Higher Education
Topic:
Academic Libraries
Libraries

These issues elicit a lot of crocodile tears, hyperbole, and toxic brinkmanship from those trying to get their way. It’s pointless bickering. We can instead focus only on what’s demonstrably best to alter, making warranted changes at the network level, and leaving the rest alone. To avoid the worst case scenario of a lack of cooperation within a library system, the proactive enactment of best practices and decisive enforcement of consortia-wide settings helps minimize technical errors and redundant efforts; avoids the paradox of choice amongst those with disparate customization philosophies; eliminates unsustainable variations merely based on arbitrary precedents or skeuomorphic design; and ensures our collective installations are as usable, future-proof, and efficiently run as possible, rather than an illustration of how “freedom in a commons brings ruin to all.”

Using automatic text generation software, computer scientists at Italy’s University of Trieste created a series of fake peer reviews of genuine journal papers and asked academics of different levels of seniority to say whether they agreed with their recommendations to accept for publication or not. In a quarter of cases, academics said they agreed with the fake review’s conclusions, even though they were entirely made up of computer-generated gobbledegook – or, rather, sentences picked at random from a selection of peer reviews taken from subjects as diverse as brain science, ecology and ornithology.

On Refusing to Read

My small act of countercultural scholarly agency has been to refuse to continue reading or assigning the work of David Foster Wallace. The machine of his celebrity masks, I have argued, the limited benefits of spending the time required to read his work. Our time is better spent elsewhere. I make this assessment given the evidence I have so far accumulated — I have read and taught some of his stories and nonfiction, have read some critical essays on Wallace’s work, and have read D.T. Max’s biography of Wallace — and without feeling professionally obligated to spend a month reading Infinite Jest in order to be absolutely sure I’m right. If I did spend a month reading the book, I would be adding my professional investment to the load of others’ investments, which — if we track it back — are the result of a particular marketing campaign that appealed to a Jurassic vision of literary genius.

From On Refusing to Read - The Chronicle of Higher Education
Topic:
Academic Libraries

How Did That Make It Through Peer Review?

Yet, I suspect these kinds of situations are relatively rare. Having been involved in enough papers, and, yes, being party to papers where I didn’t catch something in the review or editorial process, I have the ultimate answer: Reviewers, editors, and authors are human. What I mean by this is that scientific papers are complex beasts. A single manuscript may weave together disparate groups of organisms, unfamiliar pieces of anatomy, far-flung reaches of the globe, and multiple statistical techniques. A typical paper is usually seen by a single editor and two to four reviewers. It is extremely unlikely that every facet of the paper will be seen by an appropriate expert on that given facet. How likely is it that every error will be caught and addressed?

From How Did That Make It Through Peer Review? | PLOS Paleo Community
Topic:
Academic Libraries

In France, the final text of a new law on Open Access has been adopted on June 29, 2016. On July 20, the Assemblée Nationale has approved the bill, and it still needs to be voted on by the Sénat on September 27.