The public library in Berkeley, California, a city known for its obsession with recycling, composting and all things green, has found a way to reuse its misprinted buttons: by shipping them 2,385 miles away to a library in Michigan.

What's Up With That: Why Do Cats Love Boxes So Much?

Take heart feline enthusiasts. Your cat’s continued indifference toward her new Deluxe Scratch DJ Deck may be disappointing, but there is an object that’s pretty much guaranteed to pique her interest. That object, as the Internet has so thoroughly documented, is a box. Any box, really. Big boxes, small boxes, irregularly shaped boxes—it doesn’t matter. Place one on the ground, a chair, or a bookshelf and watch as Admiral Snuggles quickly commandeers it.

One can only assume it was a librarian :-) 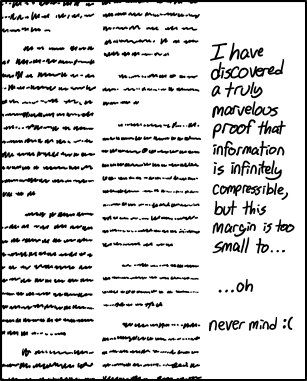 Staplercide! The lives and deaths of academic library staplers.

We have experienced 15 deaths in my library this semester. Three victims were decapitated. The bodies of two other victims were never found. Others were abused and left for dead. My library is facing a crisis. Staplercide—the murder of library staplers—is at an all-time high.

At least I'm assuming this is humor...
Patrons are people: how to be a model librarian

Could be a library meme

This could be a library meme.

The Onion Declares Print Dead At 1,803

Sources close to print, the method of applying ink to paper in order to convey information to a mass audience, have confirmed that the declining medium passed away early Thursday morning.

The influential means of communication was 1,803.

Print, which had for nearly two millennia worked tirelessly to spread knowledge around the globe in the form of books, newspapers, magazines, pamphlets, and numerous other textual materials, reportedly succumbed to its long battle with ill health, leaving behind legions of readers who had for years benefited from the dissemination of ideas made possible by the advent of printed materials.

Library One-Liners from Pub-Lib (and more)

...here. Included are the classics: "I need a photograph of Jesus Christ." Submissions are wanted!

This week's program brings a reading of some of the infamous lines from The LISNews Librarian Pickup Lines.

"I Wanna Live In A Small Library"

Andrew pointed the way to today's "Minimalism with an Exception" comic from Wasted Talent... "Someday I will live in a library that is also a maze (so I have lots of walls for art). It will look like a castle from the outside and treehouse from the inside, all the exterior walls will be giant windows. It will have a reading enclave, an art studio and a machine shop. Also it will be on an island with chickens and goats. This is all going to happen when I am a zillionaire."

Everything on the Internet is true

It has come to my attention that everything on the Internet is true. You may want to adjust your information literacy curriculum to reflect this point.

Where does a mofro have to go in a library to simply read or quietly study without incessant noise and distractions?

My new favorite letter to the editor!

"In a digital age where everyone from age 5 to 90 is suckling from an electronic teet of one kind or another all day long, the library offers no respite. Fine, media changes. Downstairs is where most of the digital media is kept, aside from the computers that take up much of the space on the main floor. Audio-visual machines with headphones are available, so you'd think perhaps the study desks there would be a good place to study. You'd think wrong, because loud tutoring occurs throughout the day both upstairs and downstairs. A meeting room is where readings and performances for adults and exuberant children are held. I'm absolutely in favor of these and all educational experiences. But where does a mofro have to go in a library to simply read or quietly study without incessant noise and distractions? Seriously! Respectful silence is the most honored and rudimentary rule of every library in the world since the dawn of time. Why does Aspen get it so wrong?"