Submitted by StephenK on October 24, 2010 - 11:43pm
Even though the audio refers to this as episode #125, it is actually #126. Due to a staff shortage, this week's episode is a quickie with a zeitgeist review and a fast miscellany that seems to focus on WikiLeaks. Related links: Upcoming Ballot Issues SLAW on Library and Archives Canada lacking a digital archival strategy The Toronto Star on Library and Archives Canada lacking a digital archival strategy UK Deputy Prime Minister calls for investigation of allegations in WikiLeaks document dump -- Deutsche Welle 120 member task force to protect informants identified in WikiLeaks document dump -- The Voice of America Almost 400,000 documents dumped by WikiLeaks -- The Register Submissions to WikiLeaks suspended for now -- WikiLeaks itself Iraqi Prime Minister Nuri al-Maliki claims WikiLeaks document dump meant to harm his chances of re-election -- The Voice of America Embarassing confirmations in the document dump -- Instapundit Generation Y not into texting -- The Register
Taxonomy upgrade extras:
LISNews
Internet
International
Information Retrieval
Politics
LISNews Features
LISNews Netcast Network
Information Science
LISTen
LNN Experimental

Sign Up for On-Line Summit--eBook: Libraries at the Tipping Point

Sign up for a day-long virtual conference to be held on Wednesday Sept 29 from 10am - 6pm EDT--eBooks: Libraries at the Tipping Point, a unique online conference that explores the way the digital world is changing books and how these changes are reshaping the way we produce, distribute, and consume them.

This event will offer librarians, technology experts, publishers, and vendors a glimpse into the future of libraries with keynote speeches, special tracks, and an exciting exhibit area. Don’t miss this opportunity to investigate the evolving role of libraries in the twenty-first century!

Librarians and library administrators will learn about current best practices for library eBook collections and explore new and evolving models for eBook content discovery and delivery. Publishers and content creators will learn how to effectively identify and develop the ‘right’ content offerings for each segment of the relatively untapped library eBook market. ebook platform vendors and device manufacturers will learn just what libraries need and want in this rapidly changing environment. It's a party and everyone's invited!!

Submitted by StephenK on August 24, 2010 - 3:46pm
Andrew Orlowski at The Register discusses the Wikileaks situation. A key point made is that data alone is useless without contextualization. A key quote from the piece:

The nature of news and journalism hasn't really changed. We want the world explained, the dots joined, and factoids are a poor substitute, no matter how sensational the trappings. We know that information isn't knowledge, and sometimes barely causes a ripple.

Why we probably won't have a Semantic Web.

Why we (probably) won't have a Semantic Web.
Some crazy librarian:

During the study, one of the researchers asked a study participant, "What is this website?" The student answered, "Oh, I don't know. The first thing that came up."

That exchange sums up the overall results from this study: many students trusted in rankings above all else. In fact, a quarter of the students, when assigned information-seeking tasks, said they chose a website because - and only because - it was the first search result.

"Ask Away" Has Stopped Taking Your Questions

This is the day British Columbia's libraries pull the plug on the AskAway! Program, which let patrons from all over the province ask questions of librarians online, in real time, and receive an immediate answer.

The provincial plan for libraries and literacy, set out in Gordon Campbell's 2004 strategic planning document Libraries Without Walls, was to bring the "world within the reach" of anyone with Internet access (and a card to a B.C. library).

Back then, Campbell was optimistic about the potential for digital technologies to promote reading in B.C. He described libraries as "the front lines in the effort to make British Columbia one of the most literate places in the world."

AskAway, launched in 2006, fit Campbell's stated overall goal for Libraries Without Walls, to "facilitate equitable access to information for all British Columbians."

Librarians too have used the service to get a second expert opinion to complement their own when faced with a particularly difficult or specialized question from a patron. The Tyee reports.

Podcasts Without A Fruit-Based Player

Sometimes posts are not easily made to Drupal. Drupal likes text and can be tricky to use if you want to incorporate images into posts. When you have a situation of multiple screenshots to display with text, Adobe Acrobat format can be a better container for such information.

In recognition of that the software & service review article attached to this post is available in Adobe Acrobat format only. Click the download link to access the piece. Podcast subscribers will automatically receive the PDF in their playlist as if it were yet more liner notes.

Missed Spellings in Searches
Besides inadvertent misspellings, people look for ways to do things right. Here now, a few spelling Questions posed to the Yahoo! search box from the past 30 days.

BP is purchasing advertising links that display at the top of the page when you search "oil spill" and similar terms on Google and Yahoo. Danny Sullivan, editor and chief of SearchEngineLand.com, tells NPR that BP is "almost certainly" spending thousands if not tens of thousands of dollars on controlling its message.

Listen to full story on NPR

Harvard Library Works to Maintain Stature in the Shift to Digital

The shift is taking place...from acquisition, to access reports the Globe. 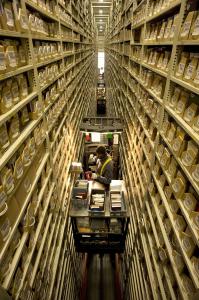 Facing an unprecedented budget crunch, the Harvard University cancelled print copies of more than 1,000 journal titles last year in favor of online subscriptions. And they're is turning toward other universities to collaborate and share acquisitions, all while trying to maintain its libraries’ stature in an increasingly digital world.

“We need to worry less about buying everything, and instead ensure that we have access to these materials,’’ said David Lamberth, a divinity school professor who is overseeing a group tasked with reinventing Harvard’s libraries. “The real issue is giving present and future scholars the ability to find what they need to find.’’

Students can now sit in their dorms and order books directly from their computers to be delivered within 24 hours to the library of their choice from the Harvard Depository, a high-density storage facility where a forklift is required to fetch books from 30-foot shelves. In some cases, students can avoid the library altogether; materials can be downloaded or the library will scan relevant book chapters and e-mail them.

The power of parametadata
First we had content, then not long after that we had metadata, although no-one called it that. Now we need parametadata – the metadata about metadata!

Neither metadata nor parametadata are anything new, but what is new is how central they have become to all sorts of business processes.

London-based Mendeley's offering up an Open API and making a vast catalog of academic publications searchable, well, that might make the cut.

Check it out...what's happening at Computers in Libraries. Among other interesting tidbits, Blake Carver is speaking about Drupal on Tuesday.

Former Google Exec On Getting Organized

In this era of information overload, the experience of being stressed, forgetful, and overwhelmed mean your mind is perfectly normal. Douglas Merrill, author of a new book called Getting Organized in the Google Era

, writes about his own struggle with dyslexia, and how that forced him to develop techniques for remembering information.

"that we as catalogers can only do so much with the information we have and the background knowledge we have. The problem here – is a wiki is open to the public or at least to all in a specific field and with bib records we save them to our system and maybe send them to a cooperative of some sort – but then that’s our record, we don’t get to benefit from the others that edit the record after us because it’s in their system – not accessible to us. "

All three posts are worth a read.

Debating Breaking Free Of OCLC: The Pros and Cons of the Largest Legacy System

One of my favorite lists to read is NGC4Lib "'next generation' library catalogs" list. I'm not much of a cataloger, nor do I even use a catalog at work, but NGC4Lib has some of the best discussions anywhere. This one is no exception, and worth a read. Set off by This Article over on LJ about the dispute over cost to use non-OCLC records for ILL. It's a great discussion on the role of OCLC, WorldCat, SkyRiver and DIY approaches to resource sharing and collaboration. Tim Spalding of LibraryThing takes a big swing at OCLC:

The real work here is done by librarians, not OCLC.... Today, when libraries are starting to realize OCLC's core service isn't worth what it was worth in 1967, OCLC is looking to permanently lock up their central position with viral contracts and, as the MSU case makes clear, monopoly pricing and flat-out bullying.

How do researchers use online journals?

How do researchers use online journals?
In the paper, the use of Oxford Journals by 10 major UK research institutions was analyzed in the fields of life sciences, economics and history, using the server logs for the full year 2007. Some of the key findings of the study include: One third of users access Oxford Journals outside business hours. Around 40% of sessions originated from a Google Search...

The aim of ROAR is to promote the development of open access by providing timely information about the growth and status of repositories throughout the world. Open access to research maximises research access and thereby also research impact, making research more productive and effective.

Helping Children Find What They Need on the Internet

Google sponsored research to detect differences in how children and adults search and to identify barriers children face when seeking information.

When Benjamin Feshbach was 11 years old, he was given a brainteaser: Which day would the vice president’s birthday fall on the next year?

Benjamin, now 13, said he typed the question directly into the Google search box, to no avail. He then tried Wikipedia, Yahoo, AOL and Ask.com, also without success. “Later someone told me it was a multistep question,” said Benjamin, a seventh grader from North Potomac, Md.

“Now it seems quite obvious because I’m older,” he said. “But, eventually, I gave up. I didn’t think the answer was important enough to be on Google.” Benjamin is one of 83 children, ages 7, 9 and 11, who participated in a study on children and keyword searching. Sponsored by Google and developed by the University of Maryland and the Joan Ganz Cooney Center, the research was aimed at discerning the differences between how children and adults search and identify the barriers children face when trying to retrieve information.