Not In My Job Description... 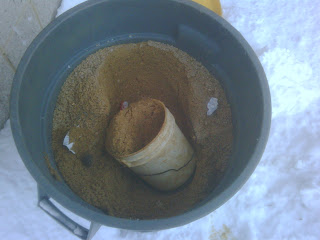 Even with the shift to RFID tags, many libraries still use barcodes. A good many of the libraries using RFID use both the tags and the barcodes.

We're all familiar with the technology; a laser passes over the code and reads it through measurement of reflected light.

A new technology in coded information utilizes something similar but in reverse. Called a Bokode, it uses a small LED covered by a lens with dark patches on it. To read it, you need a camera and some software. The dark patches detail the data and the data given out varies with angle. In other words, a Bokode on a book right in front of you might tell you an item number and title with brief synapsis. A Bokode on a book a little farther down (taken with the same camera at the same time) might tell you why you might like this book if you're interested in that one.

But for my money, here's what makes my little Circulation Supervisor brain titter with glee:

"Let's say you're standing in a library with 20 shelves in front of you and thousands of books."

"You could take a picture and you'd immediately know where the book you're looking for is."

More from the BBC.

More on Due Date Stamps

After a story earlier this week about Due Date stamps, Florida's own effing-librarian wrote to Washington Post columnist John Kelly with his thoughts.

Kelly added most of effing's email to his follow-up column, "Okay, So End of Library Stamps Isn't the End of the World.". Effing's stuff is found here fyi, along with opinions from other readers. Isn't it nice when you can start a dialogue?

Workers at the Punxsutawney (PA) Library are dealing with what they are calling an escape artist.

Punxsutawney Phil has escaped his den at the library three times over the past two weeks. Officials said the groundhog was returned to his den each time and has not been injured.

The most recent escape was last Sunday.

Library Cards Out of Corn, in SF of Course

The San Francisco Public Library will start handing out unlaminated corn "EcoCards", though you'll still have the option of old-fangled plastic.

Our landfills are not overflowing with plastic library cards -- San Franciscans are neither that literate nor wasteful -- but, in an effort to be more environmentally responsible the library will next month kick off a test program featuring a run of 15,000 corn cards (the library usually hands out 60,000 cards yearly, so these may last a little while).

Fans of plastic need not despair -- you'll still have the option of getting regular cards (mine, says Joe Eskenazi, has crayon lightning drawn on it and was designed by a fourth-grader named Wing). But, if you agree to answer a few question over the next six months or so, the librarian will hand you the rather nondescript corn card. "We want to know how it works in your wallet and what happens if it gets wet," says library spokeswoman of six months, Michelle Jeffers ([email protected]).

Due Date Stamps, A Thing of the Past?

The date-due ink stamp will soon disappear forever, sacrificed in the service of a supposed efficiency. This is yet another example of The Consumer having to do more work. Pump your own gas, scan your own groceries, remove your own gallbladder. So snarks John Kelly in his Washington Post column, "It's a plot".

By the end of June, all public libraries in Montgomery County Maryland will have done away with the date-due stamp, the familiar feature perfected by no less a figure than Melvil Dewey. In its place you will get a printed receipt. You will also get a magnet so you can affix your receipt to the refrigerator.

"It enables us to get the books into the hands of customers faster," Carol Legarreta, the county's public services administrator for branch operations, said by way of explanation. Patrons will be encouraged to manage their accounts online, checking to see when their books are due, reading e-mail reminders sent by the library system.

Vermont Collections That Include A Lot More Than Books

At least one Vermont library has a skeleton in its stacks, but it's nothing to hide. In fact, patrons can check out the plastic bones and take them home, along with a model of a human torso and a variety of human and animal X-rays.

These unlikely offerings represent the way that many of the state's public libraries are thinking outside the books, adding items to collections that can help residents save money, make money, educate children, get exercise, grow food or proclaim their heritage.

Library users can check out everything from practical items such as garden tools and snowshoes to whimsical things such as puppets and children's costumes (but no chainsaws, too hazardous). Librarians say it's all about serving the needs of their communities and enticing new patrons.

Some bright spots in Nebraska

So when the Sheridan Elementary fourth-grader heard the Library Board was proposing the closing of the South and Bethany branches to save money, she recruited classmates to rally after school Monday to support the 27th and South streets library.

“I’ve been coming here since I was 2, and when I heard about its possible closing I wanted to do something about it,” she said Monday, taking a break from the protest. “It wasn’t hard to get my friends involved. They love reading and they just love to come here.”

Before you pack up for a trip to a state park or historic site, you may want to stop by your local library first.

For the second year in a row, Georgia libraries are implementing the ParkPass program in partnership with the Georgia Department of Natural Resources. "It works just like a book. Library (patrons) can check the passes out for one week," said Alan Harkness, director of the Piedmont Regional Library System, which includes Jackson, Banks and Barrow counties.

With the passes, library card holders can get free parking or admission to more than 60 Georgia state parks and historic sites.

No Fines For "Sully" After Book Goes Down With The Plane

Submitted by Anonymous Patron (not verified) on February 2, 2009 - 8:21pm
Topic:
Circulation
Hero pilot Chesley "Sully" Sullenberger is now every librarian's hero, too. When the US Airways pilot's plane ended up at the bottom of the Hudson River on Jan. 15, so did a book he had checked out from the library at California State University, Fresno, through his local library near Danville. Sullenberger contacted library officials and asked for an extension and waiver of overdue fees because the book was in the airliner's cargo hold.

An Omaha woman who lost her library card said its disappearance nearly wound up costing her hundreds of dollars.

Michelle Anderson said she last remembered using her library card in September.
"I think I used that self-checkout and, being me, I left my card on the self-checkout," she said. "It's the only thing I can think of.

A couple of months later, notices from the library started arriving in the mail. Anderson said she threw them away, thinking they were for a $5 fine she owes.

It wasn't until another letter arrived from a collection agency that she realized someone had checked out more than $584 worth of materials in her name and the library was holding her accountable.

Some libraries are simply more progressive than merely checking out video games or ukuleles.

The Debate Over Rating Video Games... In The UK

As gaming in libraries becomes more of a commonplace and less of a radical notion, librarians will be forced to deal with the same kinds of issues they encountered when libraries began to carry movies.

When libraries started stocking VHS cassettes, there was a huge debate over R rated movies. Should libraries stock such films even though many R rated movies garner Academy Awards and other film acclaims? Now the rating issue isn't over R, it's M for Mature. Should a library carry a game or not simply based off its rating? Grand Theft Auto IV is rated M but received accolades throughout the entire gaming world. How reliable is the rating? Do we check it out to minors? And the list goes on.

We've had our share of trouble with game ratings here in the States, so it shouldn't surprise anyone that the good folks over in the United Kingdom are slogging through similar problems.

More from the Beeb.

Submitted by stevenj on July 13, 2008 - 8:28pm
Topic:
Circulation
Librarians don't like to use the word stolen, but in the last three years, nearly $350,000 worth of goods has disappeared from the Bucks Country Public Library. Now Bucks administrators plan to retain an Indiana collection agency that works exclusively with libraries to recover property and get deadbeat borrowers to pay fines and fees. The firm, Unique Management Services Inc., doesn't use tough-talking, pay-us-or-we'll-ruin-your-credit collection agents. employs seminarians. Honest to God.

As many libraries make the transition to RFID tags, the implications of processing high volumes of materials become larger. The greatest thing about RFID tags is that, with proper technology, you can read multiple tags at the same time. Barcodes still require a one at a time read.

Hundreds of items at a time? Sign this circ jerk up!

Does your library use barcodes?

Sure, most of 'em do! Even those making the move to RFID tend to keep the barcodes around for a little while, if not indefinitely. But barcodes are bland, boring, banal, and blah. So why not do something different?

Get creative with your barcodes and turn them into little artistic masterpieces!

An Article Out Of The UK reports RFID self-service technology could see the main libraries in south Northants open for an extra 26 hours per week.
Northants County Council recently launched a public consultation into the proposals which would see books at Brackley and Towcester libraries fitted with Radio Frequency Identification tags.

The tags mean customers will be able to scan their chosen books in and out themselves – and can return books to any county library using the technology.

This will free-up time for librarians who will be able to spend more time helping customers and will allow them to travel to other libraries to cover the extended hours.

Your very own Dr. Gonzo.

According to Rochelle , who talked to Amazon customer support, libraries that are lending out Kindles (Amazon's ebook reader) to patrons are in violation of the terms of service. She makes some compelling points on questions that Amazon needs to answer, such as ways to disable people from downloading without disabling the account.

Suzanne, the 1000th, Malone, you have materials waiting for you....

Submitted by Brett on January 16, 2008 - 10:42am
Topic:
Circulation
Humor
<cite>"While returning the late books and paying my $8 fine, I asked the librarian why the automated telephone system referred to my wife as Suzanne The 1000th Malone. She looks at the entry in her database and everything looks fine: Name: Suzanne M. Malone "Now if you look at that for a minute, you will see the reason for one of the most absurd software bugs I have ever encountered. Yes, 'M' (her middle name is Marie) is 1000 in Roman numerals.</cite> It's a good thing her name wasn't Liv M. Mix.