The Future of Book Reviews Critics vs Amazon Reviewers

What Gingrich reveals in his many book reviews

What Gingrich reveals in his many book reviews
Along with college professor and bestselling author, the former Republican Speaker of the House added presidential candidate to his resume today. But if Gingrich wished, he might also include his ranking as an Amazon.com “top reviewer.” Indeed, he hit his peak in 2004 rising into the top 500 of the site’s reviewers, based on how often readers found his reviews helpful. Since then his ranking has slipped, and he hasn’t posted a review since 2008.

The Rationality of One-Star Reviews

The Rationality of One-Star Reviews
But how did customers respond to this pricing decision? They were outraged! As you can see on the product page, the book has been overwhelmed with one-star reviews based not on the quality of the book itself but instead on the perception of greed and unfairness on behalf of the publisher. “junk,” writes Amazon reviewer Juan M. “It’s ridiculous that the E-BOOK is as much as the physical copy. Greed indeed.”

West Of Here': What Happened To The Frontier?

Review: The Information: A History, a Theory, a Flood

The New York Review of Books has a review of The Information: A History, a Theory, a Flood

From the LA Times/ Jacket Copy Blog: The American Library Assn. presented its top honors for books for children and young adults at a ceremony in San Diego Monday morning. The highest award, the Newbery Medal, is awarded each year to the most distinguished book for children; it went to "Moon Over Manifest" by Clare Vanderpool. The Caldecott Medal, the top award for illustration, went to the book "A Sick Day for Amos McGee," illustrated by Erin E. Stead and written by Philip C. Stead.

The ALA award medallions, which can be found on the covers of later editions of the winning books, not only signify excellence, they also can mean a longer commercial life for the books, as well as assure they find a place in libraries. Finalists also receive the medallions.

The hour-long ceremony, which began at 7:45 a.m., included the announcement of dozens of awards and finalists before an audience attending the ALA's midwinter conference. The roster of winners was too long to invite the authors, illustrators or publishers to the podium to accept their awards.

A Year in Marginalia

Best Novels of 2010 According to Ron Charles

Submitted by birdie on December 15, 2010 - 9:08am
It's hip, it's happening, it's a round-up...from the totally hip Ron Charles of the Washington Post.
Topic:
Books
Authors
Book Reviews

Non-Book Items (That Don't Exist) But Would Make Great Gifts!

Submitted by birdie on December 8, 2010 - 8:16am
Ron Charles has several non-book items to recommend as gifts; "the booklie" (super-size one-size fits all, made from the pages of remaindered novels), "spine" (the scent of reading) and the "doogk" (an ereader for our canine friends) among them. Special author appearance by Julie Klam and her doggie. Nice production values! From the Washington Post's 'totally hip book reviewer'.
Topic:
Book Reviews
Friday Funnies

'The Passages of H.M.' Reviewed by Ron Charles

Patti Smith won the National Book Award for Nonfiction this past week for her memoir "Just Kids," which recounts her relationship with Robert Mapplethorpe in the '60s and '70s. But "Just Kids" is far from her first flirtation with the written word.

Smith has actually published numerous books of poetry. And unlike other successful rock stars who have stumbled awkwardly into verse (Jewel and Billy Corgan come to mind), Smith's work reflects that she was a poet first, and that her love affair with the art runs deep.
It was the summer Coltrane died, the summer of love and riots, and the summer when a chance encounter in Brooklyn led two young people on a path of art, devotion, and initiation.

Patti Smith would evolve as a poet and performer, and Robert Mapplethorpe would direct his highly provocative style toward photography. Bound in innocence and enthusiasm, they traversed the city from Coney Island to Forty-second Street, and eventually to the celebrated round table of Max's Kansas City. It was a time of heightened awareness, when the worlds of poetry, rock and roll, art, and sexual politics were colliding and exploding. Just Kids begins as a love story and ends as an elegy. It serves as a salute to New York City during the late sixties and seventies.

Books Done Better: You Tell Us How

Book review staff at NPR ask for feedback about what books they should look at in the future.

Review: Before You Suffocate Your Own Fool Self

Cooler Than a Book...It's BOOKER

Even fantasy librarians can be awesome. 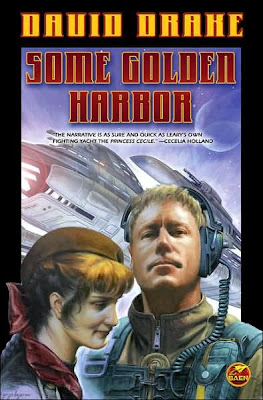 For conspiring against the government of Cinnabar, her family was massacred; she is the sole survivor. She's a scholar, a librarian turned Signals Officer who has joined Daniel Leary, a lieutenant in the Republic of Cinnabar Navy (RCN) to battle against treacherous politicians, the Alliance, rebels, and all manner of galactic grief and peril. She is a master of information technology and spy craft. She likes weapons and knows how to use them.

Don't mess with Adele Mundy, sharpshooting librarian in space. More on this title, "Some Golden Harbor" by David Drake at BookTryst.

Excerpt: It can now be quantified; an appearance on The Daily Show with Jon Stewart does more for a book’s sales than a review in the NYT Book Review.

Change of pace from the more frequent 'death of print' stories here on LISNews.

This one's about the birth of print; a discussion of the newly published book by Andrew Pettegree, "The Book in the Renaissance" with Tom Scocca of Slate and the Boston Globe.

In the beginning, before there was such a thing as a Gutenberg Bible, Johannes Gutenberg laid out his rows of metal type and brushed them with ink and, using the mechanism that would change the world, produced an ordinary little schoolbook. It was probably an edition of a fourth-century grammar text by Aelius Donatus, some 28 pages long. Only a few fragments of the printed sheets survive, because no one thought the book was worth keeping.

“Now had he kept to that, doing grammars...it probably would all have been well,” said Andrew Pettegree, a professor of modern history at the University of St. Andrews and author of “The Book in the Renaissance,” the story of the birth of print. Instead, Gutenberg was bent on making a grand statement, an edition of Scripture that would cost half as much as a house and would live through the ages. In the end, struggling for capital to support the Bible project, Gutenberg was forced out of his own print shop by his business partner, Johann Fust.

The article continues in a question and answer format here.

Submitted by birdie on August 27, 2010 - 12:31pm
Too much reading to do? Get your book review fix by video. Here's Ron Charles of the Washington Post reviewing "My Hollywood" by Mona Simpson:
Topic:
Books
Book Reviews