Which Republican is Winning the Book Sales Race?

Which Republican is Winning the Book Sales Race?
Mitt Romney is the clear front-runner, with over 100,000 copies of his latest book, 2010's No Apology, sold in this year alone. Ron Paul's Liberty Defined is a distant second with 38,000 copies sold in 2011. Herman Cain's This is Herman Cain! My Journey to the White House is the surprise that isn't all that surprising: despite being released less than two months ago, it's in third place for 2011 sales by any Republican hopeful, closely mirroring the period of his ascendancy in the polls and 9-9-9 becoming part of the national lexicon. (Although at least a few copies were purchased by the Hermanator himself.)

Prolific science fiction and fantasy author Anne McCaffrey died Monday at her home in Ireland shortly after suffering a stroke. She was 85.

McCaffrey published nearly 100 books in her lifetime and was best known for her popular “Dragonriders of Pern” novels. In her bio on her website, McCaffrey shared the following insights about her approach to writing and her first novel, which was published in 1967:

“Her first novel, ‘Restoree,’ was written as a protest against the absurd and unrealistic portrayals of women in s-f novels in the ‘50s and early ‘60s. It is, however, in the handling of broader themes and the worlds of her imagination, particularly the two series ‘The Ship Who Sang’ and the fourteen novels about the ‘Dragonriders of Pern,’ that Ms. McCaffrey’s talents as a story-teller are best displayed.”

His book My War

was a very good read.

Book description: My War is a blunt, funny, idiosyncratic account of Andy Rooney's World War II. As a young, naïve correspondent for The Stars and Stripes, Rooney flew bomber missions, arrived in France during the D-Day invasion, crossed the Rhine with the Allied forces, traveled to Paris for the Liberation, and was one of the first reporters into Buchenwald. Like so many of his generation, Rooney's life was changed forever by the war. He saw life at the extremes of human experience, and wrote about what he observed, making it real to millions of men and women. My War is the story of an inexperienced kid learning the craft of journalism. It is by turns moving, suspenseful, and reflective. And Rooney's unmistakable voice shines through on every page.

Will Amazon Kill Off Publishers?

Laura sent over a link to Will Amazon Kill Off Publishers?
Amazon is getting a lot of heat these days over its attempts to push its way into the hearts and minds of readers, writers and the larger book culture -- even comic books. Indeed, the news last week that Amazon would aggressively expand its publishing efforts by signing up authors has ruffled the feathers of many agents and publishers.

Will Amazon's plan shake up the book publishing industry as more writers have the option of a one-stop shop: agent, publisher and bookseller? Are publishers still needed?

Your favorite author, brought to you by a wealthy patron

Your favorite author, brought to you by a wealthy patron
With primarily visual works — comics and art or photo books — Kickstarter seems a great way to solicit the extra cash needed to produce top-drawer work. Comics creators have flocked to it, hoping to finish discontinued series or add color to black-and-white books. But can it bring us the next Ann Patchett or Robert A. Caro? Or is that another part of our future that will be determined by billionaires?

SLJ spoke to Lauren Myracle about how she dealt with being nominated as a 2011 National Book Awards finalist—only to withdraw her name days later after the award sponsor admitted to making a mistake.

Authors to Get Sales Data Online From 3 Big Publishers

Three major publishers said on Wednesday that they would allow their authors to access book sales data directly online, a move that appeared to challenge Amazon and its continued efforts to woo authors.

Writer Malin Alegria's first novel, Estrella's Quinceanera, covers familiar territory for anyone who has ever been a 15-year-old girl battling with her mother — but the fact that the book's sassy protagonist, Estrella Alvarez, is Mexican-American makes her unique in the world of young adult fiction.

Alegria's book follows Estrella through that quintessential coming-of-age experience for many Latinos — the traditional party that happens when a girl turns 15. Seduced by her new friends' luxurious lifestyles, Estrella becomes embarrassed by her home, her family and, most of all, the quinceanera birthday party her aunt and mother insist on throwing her.

Estrella's Quinceanera came out in 2006, but it has found enduring success in the country's Latino communities. So much so, that Scholastic has commissioned her to write a four-book series for Latino teens, the first installment of which comes out in May 2012.

It turns out there will be only five nominations in the Young People Literature category of the National Book Awards. After receiving a request from the National Book Foundation that she withdraw her book from nomination, Lauren Myracle consented, a move that dropped Shine from the list.

Last week, Chime by Franny Billingsley was added as a sixth nominee to the category, and Harold Augenbraum, NBF executive director, confirmed Monday that NBF staff had originally misheard Shine by Lauren Myracle for Chime when the list of nominees was read by the judges over the phone.

Judges...enunciate! Publishers Weekly has the story.

Submitted by Bibliofuture on October 12, 2011 - 10:55am
Here is a talk by Cliff Stoll in 1996. This talk coincided with the release of his book: Silicon Snake Oil: Second Thoughts on the Information Highway

He mentions libraries several times. His talk is about the Internet so it is inherently about information technology. He makes several predictions about computing in 5/10/15 years. You can see how they held up.
Topic:
Authors

As crimes go it was not the most heinous of offences, but Islington council's principal law clerk, Sidney Porrett, made it his mission to nab the perpetrators.

"I had to catch these two monkeys," he said. "They were a couple of darlings, make no mistake."

The darlings in question were the playwright Joe Orton and his boyfriend – later murderer – Kenneth Halliwell, and the crimes were taking library books and returning them with comedy collages on the dustjackets.

After a fruitless investigation that involved undercover librarians, Porrett eventually caught the pair in an elaborate sting operation and they went to jail for six months each. 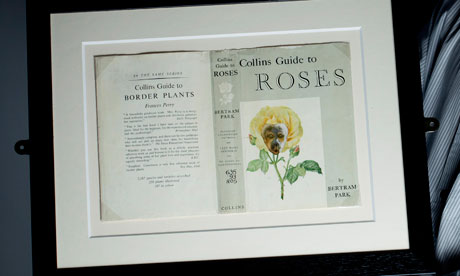 From Friday, the story of their crimes will be retold by the council, which is putting on display 40 of the 72 dustjackets that the pair defaced.

Islington's local history manager, Mark Aston, said it was the first time the jackets – "they're of international interest I'd say" – had gone on show in this number in the same place, and they shined a light on two fascinating lives and characters. More on Orton's short but dramatic life here.

With a Little Help: Now at Your Library

Cory Doctorow discusses getting his book "With a Little Help"

Full article at Publisher's Weekly:With a Little Help: Now at Your Library

Ex-Mayor of Detroit to Speak at Library...via Skype

Kwame Kilpatrick is coming to the Detroit Public Library -- sort of -- in two weeks. The controversy is already there.

Jonathan Kinloch, vice president of the library commission, said Friday that residents have called him to complain about the former Detroit mayor's book signing, scheduled for the evening of Oct. 19. Kilpatrick plans to appear via Skype, an audio and video service that allows people to interact over the Internet. The co-author of his memoir will appear in person.

At issue is an e-mail the library sent out Friday that said people who attend will "learn the truth behind (Kilpatrick's) meteoric rise in politics, the crippling controversies surrounding his administration, his downfall and, ultimately, his redemption."

Story from the Detroit Free Press.

"Publishing for me is a business, not an ideology," says the bestselling thriller writer. Eisler walked away from a half-million dollar deal offered by a traditional publisher to self-publish — and then teamed up with Amazon. His newest book, The Detachment

, was e-released on Amazon in September.

Essay by Neal Stephenson at WorldPolicy.org

Stephenson is the author of Cryptonomicon

and Reamde: A Novel

Submitted by Bibliofuture on September 25, 2011 - 1:00am
Lately it seems like you can't pick up a new work of fiction without some character crawling out of the grave or casting a spell. Authors we used call "serious" and "literary" — shorthand for writers who wrote realism — are suddenly writing about the magical and supernatural. Colson Whitehead has a zombie novel coming out next month. Tom Perotta, who wrote the suburban story Little Children, has a new novel about life on earth after a Rapture-like miracle. And there are many more on the way. These writers are bringing literary ambition to genres that were once considered lowbrow. So is old fashioned fiction on the way out? Lev Grossman is a book critic and literary novelist. But his big breakthrough came two years ago with The Magicians, a novel about a young wizard. The sequel, The Magician King, just came out and is already a bestseller. But Grossman says making the transition from “serious” to genre fiction wasn’t easy. “I had to come out to myself as a fantasy writer, at the advanced age of 35,” he tells Kurt Andersen. “It was a transformative moment — and not unpainful.” Listen to full piece here.
Topic:
Authors

From Infodocket, news of the passing of Michael Hart, creator of Project Gutenberg.

Here are two passages from an obituary written by Greg Newby:

Michael S. Hart left a major mark on the world. The invention of eBooks was not simply a technological innovation or precursor to the modern information environment. A more correct understanding is that eBooks are an efficient and effective way of unlimited free distribution of literature. Access to eBooks can thus provide opportunity for increased literacy. Literacy, the ideas contained in literature, creates opportunity.

In July 2011, Michael wrote these words, which summarize his goals and his lasting legacy: “One thing about eBooks that most people haven’t thought much is that eBooks are the very first thing that we’re all able to have as much as we want other than air. Think about that for a moment and you realize we are in the right job.”

Here is Michael Hart's obituary on the Project Gutenberg Website.

"Everything cycles back around. Things I didn’t think could ever make a comeback — Newt Gingrich and platform shoes — proved capable of startling resurgence. Now when someone tells me a trend is dead, I think, no, probably just dormant.

Take bookstores, for example. With the demise of the Borders chain and the shaky footing of Barnes and Noble, one might be tempted to write off the whole business. But as one who spent her summer on a book tour, I would like to offer this firsthand report from the front lines: Americans are still reading books. Night after night after night I showed up in a different bookstore and people were there with their hardbacks. Sure, I signed a couple of iPad covers, Kindle covers. I’ve got no problem with that. But just because some people like their e-readers doesn’t mean we should sweep all the remaining paperbacks in a pile and strike a match. Maybe bookstores are no longer 30,000 square feet, but they are selling books. "

Patchett and her business partner, Karen Hayes, and will open the doors to Parnassus Books in her hometown of Nashville in October.