A New Library for Bethlehem NH

From New Hampshire Public Radio. A sweet story of a sister, a brother and a mystery donation.

A Librarian Who Dog-Ears (but Her Mom Disapproved)

Some people handle books so tenderly that even after they’ve read one cover to cover, it looks untouched. They turn each page carefully, and always use bookmarks. They refrain from cracking the spine. They never eat as they read, so the pages aren’t dotted with red sauce or spotted with chocolate. And they wouldn’t dream of leaving a book lying around where their Yorkie-poo (or toddler) might nibble the corners.

When I read a book, I move right in and make myself at home. I dog-ear pages, underline, highlight and make marginal notes. I’ll use the blank pages to make shopping lists or jot down phone numbers. At the ballpark, I’ve been known to use that space to list the opening line-ups of both teams. By the time I’m through reading a book, you can definitely tell that I’ve been there.

Peter Scott, Creator of Hytel-net and Publishers Catalogs, Dead at 66

According to a posting by family members on Peter's facebook page, Peter died calmly in his sleep at St. Paul's Hospital, Palliative Care Unit in Saskatoon on December 30.

He was an important figure in information and library science, beloved by many.

Here are some biographical bits:

Peter Scott was born February 14, 1947, in Walthamstow UK and moved to Canada in 1976. He was the Internet Projects Manager in the University of Saskatchewan Library in Saskatoon. Along with another Saskatoon librarian, Darlene Fichter he served as the editor and content developer for many online directories.

He was the creator of HYTELNET (1991), the first electronic browser for Internet resources, developed from 1990. In his 1991 video, Peter demonstrates a later version of HyTelnet, while an archive lists the resources available through the service. Peter wrote a blog, Peter Scott's Library Blog for Credo Reference. Other web creations are: Twitter Compendium, RSS Compendium, Weblogs Compendium, allrecordlabels.com, Blogging The Blues, Peter Scott's Library Blog, Libdex - (Sold in 2005) and Publishers' Catalogues . This reporter (birdie) first met Peter (via internet) when I asked him to add my company to the listing thirteen years ago. In the interim, we remained good virtual friends.

He was also also a blues singer and harmonica player, and had the distinction of winning a Juno Award for having his song "TV Preacher" on the album "Saturday Night Blues" which won "Best Roots and Traditional Music Album" in 1992.

The Story Behind the First Ransom Note in American History

One day last March, Bridget Flynn, a school librarian who lives in Philadelphia, was searching for an old family drawing to print on the invitations to her daughter Rebecca’s bridal shower. As she and Rebecca rummaged through the several generations of family artifacts—letters, photographs, an envelope of hair cuttings—she keeps in plastic bins in her basement, they found a stack of small envelopes tied together with a black shoelace.

Five dead-end jobs, and how to escape them

Why Avoid It: Nolin says that this is a dying occupation simply because information now is so readily devoured using technology. Plus, she says that federal funding for new libraries is basically non-existent, and job growth is expected to follow suit.

Why Nutritionist A Better Choice: "With our aging and waist-expanding population, the number of people who visit a nutritionist to help address health issues is exploding," says Nolin.

Huge Thefts from Girolamini Library with a Librarian in the Plot 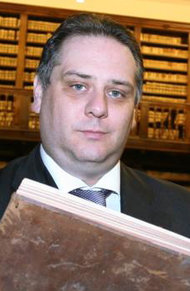 A Mild-Mannered Librarian on the Today Show

Writer and Philadelphia area librarian Roz Warren writes about her experience as a guest on the Today Show in the Huffington Post. She was invited to appear after writing an essay about being self-accepting wearing a bathing suit. Warren is 58.

Here's the original post: At Ease With a Body Fighting Gravity from the NY Times Booming.

Turning A Page Inside A Rural One-Room Library

Rachel Reynolds Luster took over this branch four months ago with the goal of creating a learning hub. She calls herself a curator, not just a librarian.

Her first task? Filtering out some of the favorites of the previous librarian.

"It's been interesting working this transition with her," Luster says. "She was quite upset that the cooking magazines were gone. But we recycled them all, and we kept some holiday cookie editions."

From the Flint Journal:

MONTROSE, MI -- A former Montrose librarian is suing the Genesee District Library over claims she was fired for talking too loudly.

Susan Harshfield, 30, of Swartz Creek, said she was fired for talking loudly to police after she called for help with a patron who refused to leave the library.

Library spokesman Trenton Smiley declined to comment on the lawsuit. Library attorney Patrick Parker also declined comment. No response to the allegations has been filed with the court.

Harshfield's attorney, Tom Pabst, said his client was serving as a whistleblower when she was fired by the library.

"The taxpayers and library lost a good worker in Susan," Pabst said.

Patricia Ann Kettles did not read her first book until she was 10. She knows what it is to struggle with the very act of reading, trying to make sense of words on a page long past an age when other children can polish off a thick Harry Potter or Twilight novel as quickly as a wedge of cake.

Now 40, at the library on Staten Island where she presides and where patrons know her fondly as “Miss Patty,” she talked recently about what it was like to be illiterate while others around her were devouring entire worlds.

“The family’s name for me is Patty Ann, and for the longest time when I wrote the name ‘Patricia,’ I thought I was writing ‘Patty Ann’ because I had memorized it,” she said. “I didn’t realize I was not writing my right name.”

Forced to repeat first grade and twice made to switch schools, she was so lost that she was in fourth grade before she conquered an entire book. “That was ‘Dear Mr. Henshaw,’ by Beverly Cleary,” Ms. Kettles said. “I remember, because I was so proud.”

Today she is the manager of the Port Richmond Library, which operates out of a stately brick edifice that Andrew Carnegie’s largess built a century ago on “one of the finest residence streets on Staten Island,” as the area was described in The Staten Islander of March 1905. There is a theater in the basement bestowed upon the library 74 years ago by the Work Projects Administration. "I use hand sanitizer any time after handling Twilight, 50 Shades, any movie with Mel Gibson or Tom Cruise, High School Musical, anything by Michael Moore, Richard Dawkins, Phillip Pullman, Rush Limbaugh, or Ann Coulter. I feel disgusting every time I have to touch these things."

Who could refuse? Workman Publishing, via Early Word is offering a FREE COPY of a new book by Chip Kidd, GO, an introduction to graphic design for kids, but also a wonderful primer for adults. Be one of the first 50 librarians or instructors to respond! Yes and no, according to your perspective.

City Limits, a NYC blog reports that earlier this summer, the Department of Education requested a variance from the state, asking official permission to offer fewer librarians in schools. While the DOE says it recognizes librarians' value, in the face of fiscal challenges and technological changes the department is looking for alternative ways to provide students with library services. In place of hiring certified librarians, schools could train teachers to offer the same services, bring in parent volunteers or have librarians circulate between schools.

And from the librarians' POV: "The idea that a shelf full of a books somehow replaces a librarian is wrong," says Christian Zabriskie, Executive Director of Urban Librarians Unite, a professional group that supports librarianship in urban settings. "If I'm exploring things about, say, my sexuality, drug issues, health issues, I can't grab those books in front of my peers," he adds. Zabriskie's own middle school librarian had a significant impact on his life by supporting him when he was being bullied and teaching him how to stand up for others.

Library logistics: How millions of new books make it to the shelves

The library system orders books, CDs and movies daily, timing them to hit the shelves on the same day as they would in bookstores. Items also are ordered when there are at least twice as many requests from the public as copies available.This year, the library is to spend $7.4 million on materials.

It’s a precision-timed logistics that few library patrons notice, unless something goes wrong.

“We say that nobody talks about technical services until something isn’t there,” said Laura Simonds, manager of the operations center at 101 S. Stygler Rd. in Gahanna. “If we’re doing our job really well, the book is always there.”

A Summer Reading Program and Its Discontents

Via Gawker a librarian who is sick to death of the same kid always having read the greatest number of books at the summer reading program.

Nine-year old Tyler Weaver calls himself “the king of the reading club” at Hudson Falls Public Library. But now it seems Hudson Falls (NY) Public Library Director Marie Gandron wants to end his five-year reign and have him dethroned. Tyler won the six-week-long “Dig into Reading” event by completing 63 books from June 24 to Aug. 3, averaging more than 10 a week.

He has consistently been the top reader since kindergarten, devouring a total of 373 books over the five contests, according to his mother, Katie.

“It feels great,” said Tyler, an intermediate scholar student at Hudson Falls School. “I think that was actually a record-breaking streak.”

Everyone is so proud of him. Everybody, it seems, but Gandron, who was surprised to learn Katie (his mom) notified a Post-Star reporter about her son being a longtime winner. During a phone call Tuesday to Gandron, the library director said Tyler “hogs” the contest every year and he should “step aside.” “Other kids quit because they can’t keep up,” Gandron said.

Gandron further told the reporter she planned to change the rules of the contest so that instead of giving prizes to the children who read the most books, she would draw names out of a hat and declare winners that way. She said she can’t now because Katie has come forward to the newspaper.

Gandron said she has an “attitude” about the contest because several years ago a little girl came in claiming she had read more than 200 books. Her mother backed her up, but it was discovered the girl was lying.

Libraries' Leading Roles: On Stage, On Screen And In Song

From Doctor Who to Buffy to Borges' Babel, we visit some notable libraries in popular culture.