Internet Activist, a Creator of RSS, Is Dead at 26, Apparently a Suicide

At 14, Mr. Swartz helped create RSS, the nearly ubiquitous tool that allows users to subscribe to online information. He later became an Internet folk hero, pushing to make many Web files free and open to the public. But in July 2011, he was indicted on federal charges of gaining illegal access to JSTOR, a subscription-only service for distributing scientific and literary journals, and downloading 4.8 million articles and documents, nearly the entire library.

Earlier this month, a new version of Jeffrey Beall's List of Predatory Publishers 2013 was posted at scholarlyoa.com. Since then, faked quotes have been posted to multiple blogs, claiming that Jeffrey Beall has been trying to extort money from publishers. This is an apparent smear campaign to discredit the efforts to name predatory publishers. The criteria for listing these publishers is also posted at scholarlyoa.com.

It's that time again... let's look back at this year's top library headlines.

After researchers found a way to spread H5N1 to humans, an interesting test ensued of the bounds of free speech versus public health. Citing concerns over bioterrorism, a government panel wanted to ban publication of the scientific findings. The paper was printed, in full, in the journal Science.

Multiple generations of librarians have lamented over costly journal prices. Aside from the continued drive for
public access to funded research, libraries and now finally scholars are boycotting Elsevier and the American Chemical Society. Here's hoping the Open Access movement against profiteering publishers keeps growing.

Quote of the Year

"The economics of publishing print no longer worked and that's why we're going to go all digital" - Newsweek editor Tina Brown. How does your employer intend to survive?

8. Begun, the E-Book Wars Have

As e-books continue to gain mainstream dominance, thorny issues over lending, pricing, and the future of publishing remain crucial to follow.

Some library administrators now realize that running a change averse institution no longer has the survival value that it once did. The very notion of change, however, is still antagonistic to some. Two notable examples of adapting libraries this year are Harvard University and the New York Public Library.

Agence France-Presse via France24 reports that the Washington Post is reviewing erecting a paywall to its online edition in 2013.

Has your Library Gone to the Dogs?

With the recent stories about disasters, legal wrangling, and futurism, let's look at a hands down, slam dunk, win-win idea for libraries: dogs! Many school and public libraries use therapy dogs in their reading programs, calming children to widespread acclaim. Academic libraries also make use of therapy dogs, calming homesick students during finals week. These projects involve minimal costs and have a profound impact. Don't let a lawyer or administrator use absurd logic to deny you this wonderful opportunity to have patrons perceive the library as a comfortable and welcoming atmosphere. And remember: refusing to allow a service animal in to a building is also a violation of federal law. What are your dogs in libraries stories?

Hurricane Sandy Knocks Out Gawker and Other News Sites

As Hurricane Sandy hit the East Coast, the resulting power failures knocked out several major Web sites, including Gawker and The Huffington Post.

After 80 years in print Newsweek adopts an all-digital format

We are announcing this morning an important development at Newsweek and The Daily Beast. Newsweek will transition to an all-digital format in early 2013. As part of this transition, the last print edition in the United States will be our Dec. 31 issue.
Meanwhile, Newsweek will expand its rapidly growing tablet and online presence, as well as its successful global partnerships and events business.

Library World Records is back online

Submitted by GODFREY_OSWALD on August 2, 2012 - 1:38pm
Topic:
News
Acquisitions
Books
Libraries
Librarians
Librarian's Book Club
Announcements
Academic Libraries
LISNews Features
Information Science
The website for Library World Records, the Guinness Book of World Records for libraries and books is now back online. Library World Records is fascinating book first published in 2004 after research work began on the book in 2002. The book was further extensively updated in a second edition in December 2009. Library World Records provides hundreds of intriguing and comprehensive facts about ancient and modern books, manuscripts and libraries around the world.

Sifting through quantities of information

A recent article at the tech news blog, Gigaom, provides food for thought for libraries. In the piece, the author describes the value of simplicity and delivering what users want in terms of content, using the example of a news service called Evening Edition. One of the quotes from this post that stands out is "Of course, sifting through vast quantities of information in order to show people the important stuff is what newspapers are supposed to do..." Substitute the word 'newspapers' for 'librarians' and we are talking the same language.

At Least He Didn't Mention The Library...

Submitted by StephenK on July 12, 2012 - 3:16pm
With the publication of the Freeh report relative to the child abuse scandal at The Pennsylvania State University, Chicago Sun-Times columnist Rick Morrisey is calling for the outright physical destruction of many campus monuments to coach Joe Paterno. Not mentioned in the piece by Morrisey is Paterno Library on-campus which otherwise bears the coach's name.
Topic:
News
Crimes &amp; Criminals
People N Patrons
Libraries
Academic Libraries

A New News Aggregator and its SciFi Roots

More interesting than the beta launch of a news aggregator called Wavii, is the recap of of such things in Science Fiction novels and stories of the past at Technovelgy.com
"This same idea was first explored in science fiction decades ago. In his 1978 novel The Fountains of Paradise. Arthur C. Clarke described the personal interest profile that could be used to gather all relevant items of information from news feeds."

Letters to the Editor; Responses To Potential Changes to the NYPL

New York Times: A Reimagined Library, Are the Changes Good? in response to previous NYTimes articles.

Like innumerable writers and researchers over the years, I have experienced the joy (many times) of entering the New York Public Library with a near-hopeless citation in hand only to find the very material I was looking for in just minutes. It is a euphoric moment to which many writers can attest, and it has enriched the quality and content of books beyond counting.

That which gets put off to tomorrow rarely gets done, yet the library administration, under its new plan, would move a huge chunk of its research collection off site, ostensibly available some other day, when a researcher makes a request. The splendor of the library is not only the vastness of its collection but also the immediacy of it.

If there remain any wonders of the world, the New York Public Library is one of them. Please don’t change it.

The writer is vice president and editor in chief at Tarcher/Penguin.

There’s a comfort level in keeping the status quo, yet the 21st century offers us so many new ways of doing research. Without looking at possibilities for the future, we deny ourselves those opportunities.

Specific discussion of a LISNEWS post in this issue. See- Public Library Closures:
On Not Dropping Like Flies

More and more content on the web has been going behind pay walls. The NYT implemented a porous pay wall this year. Non-subscribers could access up to 20 articles a month. This number has been reduced to 10.

They include work related to his most famous formula — E=mc² — and personal papers, such as letters to and from his former mistresses.

The NPR piece suggest that this gallery is a good place to start browsing.

NEW YORK — Authors Jonathan Safran Foer and Nathan Englander, seated together at a Brooklyn diner, would like to continue a discussion that has lasted for centuries.

They have collaborated on a text dating to Biblical times and revisited each year by millions of Jews worldwide. "New American Haggadah," just published by Little, Brown and Company, is a new edition of the Passover narrative that has been edited by Foer and translated by Englander.

They are a contrast — the earnest Foer and the expansive Englander — but they share skepticism about organized religion and anxiousness about what it means to be a Jew. Both have included Jewish themes in their fiction, whether the grandson of a Holocaust survivor seeking answers about the past in Foer's "Everything Is Illuminated" or the tug of war between religious and secular culture in Englander's "For the Relief of Unbearable Urges." 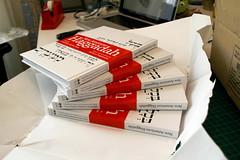 Foer, inspired by Seders (the traditional Passover gatherings) he has attended, says he thought of the project about six years ago.

Inside Edition Who Is Lurking In Your Public Library

Submitted by tom on February 22, 2012 - 12:41pm
Topic:
News
Crimes &amp; Criminals
Libraries
TV
[Edit 2/23 9:15am] It's now on the site: http://insideedition.com/news/7713/inside-edition-investigates-whos-lurking-in-your-library.aspx To be broadcast Wednesday, Feb. 22 New York, NY – Feb 22nd – It’s the last place you think you’d be a victim – the public library. But an INSIDE EDITION investigation found that crimes are being committed across the country in these supposedly safe havens, from petty thefts to violent, sexual assaults.

Unrest in Afghanistan over Burning of Korans (Again)

Troops at a US base in Afghanistan mistakenly burned Korans and other religious texts, in an effort to eliminate materials containing "extremist communications." This has sparked riots reminiscent of those caused by pastor Terry Jones burning a Koran in his church last year. Read the latest at The New York Times; CNN; MSNBC.

As the Elsevier boycott continues to gain attention, a good example of what the company stands for: the Ex Libris bX service is a neat little recommendation tool that displays suggested citations, working from a known item and based on search traffic. It provides researchers with suggestions based on their area of interest, and the items displayed are usually additional relevant articles (similar to Amazon's "people who bought this also bought..." feature). The Elsevier ScienceDirect site embeds this service in their own custom application, but librarians noticed the results it was displaying were only for Elsevier titles. Here is the Ex Libris explanation:

bX itself is entirely publisher and platform neutral and sends and displays all relevant articles regardless of journal, publisher or platform. But those who build their own applications – like Elsevier did - can manipulate the data by filtering before displaying it. For the app on Science Direct Elsevier indeed filters the bX articles by those available from Science Direct.

Is it any wonder this company gets a bad rap?