The Fascinating History of Card Catalogs

Submitted by birdie on April 21, 2017 - 10:46am
Yes, according to Vox.com the history of card catalogs is weirdly fascinating.

So don't disengage just yet...

The Library of Congress just released a book on the history of the card catalog, and while I can physically feel you clicking away from this article even as I type I recommend that you don't.

The Card Catalog makes a persuasive case that cataloging knowledge is fundamental to the acquisition and spread of knowledge, and that a working library catalog is, in some ways, a basic necessity of civilization. And since cataloging is a calling that attracts neurotic and obsessive personalities, the history of the library catalog charts a weird, twisty path, with a lot of back-tracking followed by enormous leaps forward.

Sorry, Dewey, the Decimals are Outdated; the Catalog of the Future will Aid Indies

So now we’re at an impasse. Online systems are raising all boats fast, making accessible titles that might otherwise have languished in obscurity. (Case in point: Amish space vampires.) They’re doing it without making readers use Dewey and they’re doing it in innovative social ways that encourage book discovery. But physical books aren’t going anywhere - indeed, they’re resurging in popularity - and the quaint cataloging system that patrons still stumble through is only really useful with the aid of an OPAC that, itself, is largely keyword based.

From Sorry, Dewey, the Decimals are Outdated; the Catalog of the Future will Aid Indies — Foresights — Foreword Reviews
Topic:
Cataloging

However – and this is a huge “however” for Bertino – they can only read if they can find the books they need and want.

And that’s why Bertino “killed Dewey.”

Troy, Bertino said, is one of the first school districts in Illinois to classify books based on Common Sense Categories rather than on the “antiquated” Dewey Decimal System, which is how libraries have classified books for more than a century.

Bertino feels Dewey is impractical for 21st century kids accustomed to searching online by keywords. The beauty of Common Sense Categories is that students easily transition to traditional libraries when they enter high school, Bertino said, even without ever formally learning Dewey.

The Future of the Web Is 100 Years Old

Among these efforts, one stood out. In 1893, a young Belgian lawyer named Paul Otlet wrote an essay expressing his concern over the rapid proliferation of books, pamphlets, and periodicals. The problem, he argued, should be “alarming to those who are concerned about quality rather than quantity,” and he worried about how anyone would ever make sense of it all. An ardent bibliophile with an entrepreneurial streak, he began working on a solution with his partner, a fellow lawyer named Henri La Fontaine (who would later go on to join the Belgian Senate and win the Nobel Peace Prize): a “Universal Bibliography” (Repertoire bibliographique universel) that would catalog all the world’s published information and make it freely accessible.

From The Future of the Web Is 100 Years Old - Issue 21: Information - Nautilus

Submitted by Anonymous Patron (not verified) on November 5, 2015 - 9:34am
Topic:
Cataloging
Cool Sites
<a href="http://www.libraryworkflowexchange.org/">Library Workflow Exchange</a> is a new site designed to help librarians find sample workflows, tools, and procedures. It currently focuses on workflows for cataloging, description, and metadata creation. If you have workflows or documentation that you think a wider audience would benefit from, please share them!

Descriptive metadata is never neutral. It reflects our understanding of our society, and our interpretation of how we think the world should be. It is unavoidably evocative of not just a book, film, or song, but rather the whole society which gave it genesis. When developed, particularly Western, countries wind up determining codes and classifications, a very specific illustration of the world is drawn which is a slim sliver of human understanding of the world.

From Metadata that kills — Medium

DUBLIN, Ohio, October 1, 2015—OCLC printed its last library catalog cards today, officially closing the book on what was once a familiar resource for generations of information seekers who now use computer catalogs and online search engines to access library collections around the world.

Moving The LGBT Collections Out Of "abnormal sexual relations"

A number of years ago, a young man came to the reference desk with a question for the Social Science, Philosophy & Religion department librarians.  He asked me why books about gay men were next to the shelves with incest and sexual bondage books.  He said that wasn't how he was at all.  His face showed deep hurt and from his expression, I read that as a gay man who came of age in the 21st century, he had never experienced the kind of marginalization, ostracization and ridicule I had seen my friends fight when I was his age.  It had likely never occurred to him that the Dewey Decimal Classification (DDC) itself would assign lesbians, gay men, bisexual people and transgender people (LGBT people) to a call number, 301.4157, as a kind of "abnormal sexual relations" (modified 14th edition of the DDC).  But, as a librarian and classificationist, I knew that earlier call numbers had been more demeaning.

In Honor of Melvil Dewey's Birthday...

The Library of Congress has announced a transition to online-only publication of its cataloging documentation. As titles that are in production are released, the Library’s Cataloging Distribution Service (CDS) will no longer print new editions of its subject headings, classification schedules and other cataloging publications. The Library will instead provide free downloadable PDF versions of these titles.

In 2012, the Library of Congress conducted an extensive study on the impact and opportunities of changes in the bibliographic framework and the technological environment on the future distribution of its cataloging data and products. The Library’s transition from print to online-only for cataloging documentation is a response to a steadily declining customer base for print and the availability of alternatives made possible by advances in technology. This shift will enable the Library to achieve a more sustainable financial model and better serve its mission in the years ahead.

Beginning July 1, print publications that are currently sold through CDS will become available as free, downloadable PDF titles through the Library’s Acquisitions and Bibliographic Access Directorate website at www.loc.gov/aba/. Because all of the content cannot be made available simultaneously, the retrospective titles will be phased in over time as PDF files.

On a wall in the corner of Greenfield Community College's Nahman-Watson Library, 128 artifacts from the library's card catalog hang preserved in a glass case — signed by the authors who penned the very books to which the cards once led.

The project has been 14 years in the making for librarian Schneider, who wanted to memorialize the cards after the library's catalog went digital in 1999. In the years that followed, Schneider sent cards to local authors and artists, asking if they would sign their card and make some contribution to the display. A decade later, after GCC's library was expanded, she resumed her quest — sending letters across the country to novelists, poets and politicians.

Library Director Deborah Chown said Schneider's project captures a time when people would find new books through serendipity — simply because it was next to another book or classified through a similar subject matter. Chown and Schneider don't deny the advantages that new library technology offers — the opportunity to search rapidly through online databases and access books, journals and newspaper articles.

But there was also some surprise and sadness when a tour of prospective students came through the library, saw the display and didn't recognize the cards.

SWANSEA, Mass. - An outpouring of support for Penny the cat, the unofficial mascot of the Swansea Public Library, has led a Massachusetts man to give up his efforts to evict the cat from the public building. Patrick Higgins sent an email to Swansea Public Library trustees last Saturday, which said he would file a formal complaint with the U.S. Department of Justice if Penny was not removed from the premises. According to Higgins, people allergic to cats would be unable to use the library which meant the public building did not comply with the American Disabilities Act.

As news of Penny’s potential eviction spread, supporters for the neighborhood cat began to rally creating petitions to keep the Penny on the premises. One petition on Change.org has elicited nearly 1,800 signatures.

In his LISNEWS blog Bearkat comments on cataloging.

Sign in the Manly Library Australia reassigns his titles to Fiction 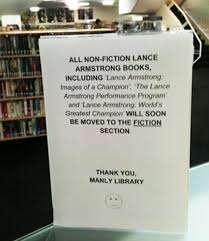 Lance Armstrong's fall from grace after admitting to using performance-enhancing drugs shows no signs of slowing.

The professional cycling fraternity has shunned him, the sponsors have dropped him and just about everyone else he's ever crossed is about to sue him.

And now, his books - once an inspirational story of how to overcome adversity - have been re-shelved and re-categorised from 'must-read autobiography' to 'fiction.'

As reported a few weeks ago, OCLC has recommended that its member libraries adopt the Open Data Commons Attribution license (ODC-BY) when they share their library catalog data online. The recommendation to use an open license like ODC-BY is a positive step forward for OCLC because it helps communicate in advance the rights and responsibilities available to potential users of bibliographic metadata from library catalogs. But the decision by OCLC to recommend the licensing route — as opposed to releasing bibliographic metadata into the public domain — raises concerns that warrants more discussion.
[Thanks Sarah!]

Sorting and searching at the library

This post is about searching and sorting, two fundamental aspects of data processing, and what the library has to teach us about them.

If there’s a theme here, it is that the library is doing things that are recongizable as algorithms from computer science. But not the obvious textbook algorithms! I guess when an algorithm is going to take up a human being’s time, it tends to get optimized. These algorithms seem to be tuned very well indeed. But perhaps if you looked inside any organization you’d find something similar.

No deal with OCLC

No deal with OCLC
The National Library (of Sweden) has ended negotiations with OCLC, as the parties could not successfully come to terms on a contract. The decision was made by the National Librarian after discussion in the National Reference Group and the Expert Group for the Libris national system
[Via DJF of the LSW]

Six amazing things about life as a cataloguer

Six amazing, and possibly unexpected, things about life as a cataloguer
"Last week on Twitter, Deborah Lee of the Courtauld Institute of Art listed the “six amazing things” about being a cataloguer, taken from a presentation she had written to give to library school students. Here at HVCats, we loved these six amazing things and thought they deserved a wider audience."

Did Today's Shelf Check Get A Subject Heading Changed?

Submitted by Blake on September 19, 2011 - 9:16pm
Today's Catalogablog Says Today's managed to get a subject heading changed on a bib record. Can anyone else confirm this?

By poesygalore | View this Toon at ToonDoo | Create your own Toon
Topic:
Cataloging

Do Book Ratings Belong in Library Catalogs?
"To me it feels like a violation of public library philosophy. I have less of a problem when the rating is average or high because I assume it encourages patrons to check out a book they are already considering. But when patrons see a low rating on a book in our catalog, especially a rating not attributed to an individual patron, it appears that our library is bad-mouthing the book…and that discourages, rather than promotes, literacy."