What books were taken to the Antarctic 100 years ago?

When Sir Ernest Shackleton set off for Antarctica on his ship Endurance, he made sure he had plenty of reading material. But details of precisely what books he took have remained hidden in this photograph - until now.

From What books were taken to the Antarctic 100 years ago? - BBC News

That novel, once a prized possession of Van De Carr’s, is now gone, along with around 400 of his other books worth well over $350,000. Someone stole his van while it was parked outside a friend’s Oakland home this week.
“The thing about that book is it was as new as the day it was published. Just a perfect, perfect copy. It glistened,” Van De Carr lamented.
“It’s my livelihood, it’s how I make a living,” added Van De Carr, owner of Booklegger’s Books in Chicago. “Now, I have nothing.”

From Van filled with $350,000 in rare books stolen in Oakland - SFGate

You Could Look It Up

Book that has just been released: You Could Look It Up: The Reference Shelf From Ancient Babylon to Wikipedia

"Knowledge is of two kinds," said Samuel Johnson in 1775. "We know a subject ourselves, or we know where we can find information upon it." Today we think of Wikipedia as the source of all information, the ultimate reference. Yet it is just the latest in a long line of aggregated knowledge--reference works that have shaped the way we've seen the world for centuries.

You Could Look It Up chronicles the captivating stories behind these great works and their contents, and the way they have influenced each other. From The Code of Hammurabi, the earliest known compendium of laws in ancient Babylon almost two millennia before Christ to Pliny's Natural History; from the 11th-century Domesday Book recording land holdings in England to Abraham Ortelius's first atlas of the world; from Samuel Johnson's A Dictionary of the English Language to The Whole Earth Catalog to Google, Jack Lynch illuminates the human stories and accomplishment behind each, as well as its enduring impact on civilization. In the process, he offers new insight into the value of knowledge.

Calhoun was curious to see how the punctuation in his favorite books stacked up, so he wrote a script that strips the words from the pages. Next to Rougeux’s swirling posters, Calhoun’s visualizations are less abstract, more straightforward. In one, he simply leaves them as-is—a block of periods, commas and dashes in all their geometric, grammatical beauty. In another, he assigns each glyph a color, creating glowing heatmaps that show which marks are most prevalent.

From Charting Literary Classics’ Punctuation, From Austen to Twain | WIRED

What it looks like to process 3.5 million books in Google’s cloud

What did it look like to process 3.5 million books? Data-mining and creating a public archive of 3.5 million books is an example of an application perfectly suited to the cloud, in which a large amount of specialized processing power is needed for only a brief period of time. Here are the five main steps that I took to make the invaluable learnings of millions of books more easily and speedily accessible in the cloud:

From Google Cloud Platform Blog: What it looks like to process 3.5 million books in Google’s cloud

Today, in an unfortunate example of the overreach of the United States’ current copyright law, the Wikimedia Foundation removed the Dutch-language text of The Diary of a Young Girl—more commonly known in English as the Diary of Anne Frank—from Wikisource.[1]
We took this action to comply with the United States’ Digital Millennium Copyright Act (DMCA), as we believe the diary is still under US copyright protection under the law as it is currently written. Nevertheless, our removal serves as an excellent example of why the law should be changed to prevent repeated extensions of copyright terms, an issue that has plagued our communities for years.

An early adopter of open source textbooks, Neth said he turned to the new technology out of frustration with spiraling prices of commercial textbooks.
"It's seeing the costs go up every semester and almost feeling powerless," Neth said.
Universities and state governments are lining up behind the cause as a way to make college more affordable. The open textbooks, produced with publicly available material, are issued to students for free or a small fraction of the hundreds of dollars they typically spend annually on books.

From Open-source textbooks gain in push for college affordability

All we see of teh bridge though is is decking, though we do see a huge rise, which gives us a hint of teh bridge's nature--it turns out that this is the oldest elliptic arch bridge in the world.  While the architecture is beautiful and teh perspective intersting, teh characters populzting the foreground are sometimes even more interesting. In general figures like this were used to take up empty bits of space and to provide perspective, and were depicted in the standard ways in which walking/riding humans are represented. In this case, however, there is a lot of social drama going on amidst the simple space fillers.

On the Merits of Disturbing Literature

Yet I do not only want the reader to fear for Elsie. I tried to both intensify and relieve that fear by placing it alongside the hope that Elsie will heed the best in herself, as she is, intermittently, able to do. Elsie’s journey does not ultimately paint a disturbing portrait of life. Rather, Wreck and Order sets a young woman’s disturbing behavior against her attunement to the “countless earthly riches” of having a body and a mind, showing how difficult and how necessary it is to honor the simple and the good.

From On the Merits of Disturbing Literature

A Review of the Amazon Books Store

In conclusion, I see a couple of strategic advantages in Amazon Books. Such stores offer to Amazon.com, what Apple Stores provide to Apple.com. Namely a showroom where customers can try products such as Amazon Echo, Kindle Fire, Fire TV, and whatever new products they might produce in the future.

From A Review of the Amazon Books Store

Google opens an online store for 'books that can't be printed

"Welcome to our bookstore," reads the blurb for Google's new Editions at Play initiative. "We sell books that cannot be printed."

It's a simple manifesto that marks an interesting foray into the digital arts for Google. Editions at Play is all about exploring the idea of "digital books" — not just ebooks, but books that simply can't exist on static, printed paper. The project launched last week with a pair of new titles: Entrances & Exits by Reif Larsen, and The Truth About Cats & Dogs by Sam Riviere and Joe Dunthorne. The first is essentially a point-and-click adventure game in Google Street View, while the second is a "failed collaboration" consisting of Riviere's and Dunthorne's diaries which readers can switch back and forth between.

How to Read a Book a Week

So how can we read a book or more a week? It turns out that what works best for me is following some advice I got while I was still in college. Michael Jimenez, a professor of Latin American history, was one of the best professors I ever had. One day I told him that I was struggling with the reading load.

From How to Read a Book a Week

A Lost Beatrix Potter To Be Published

Submitted by birdie on February 1, 2016 - 12:57pm
Report from The New Yorker: Last week, Penguin Random House announced that it will publish another “lost” Potter work about a cat: “The Tale of Kitty-in-Boots,” which she had begun and abandoned two years earlier, in 1914. Several manuscripts of the story were discovered in 2013 in the Potter archive at the Victoria and Albert Museum by Jo Hanks, a publisher at Penguin Random House; the book is being published this fall to coincide with the 150th anniversary of Potter’s birth. 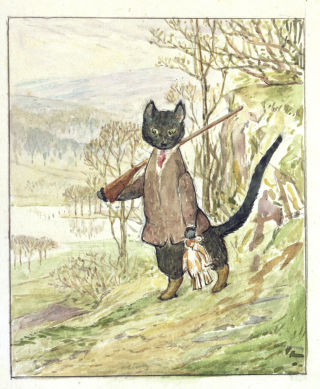 The author concluded the she "did not draw cats well."
Topic:
Books

That e-books have surged in popularity in recent years is not news, but where they are headed – and what effect this will ultimately have on the printed word – is unknown. Are printed books destined to eventually join the ranks of clay tablets, scrolls and typewritten pages, to be displayed in collectors’ glass cases with other curious items of the distant past?

The historical book tells the story of Hercules, a slave used by the president as his chef. It shows Hercules and his daughter Delia happy and taking pride in making Washington a birthday cake.

Almost as soon as the book was released, it received withering criticism for whitewashing the history of slavery.

The review in Kirkus noted that the book contained images of smiling slaves in almost every page. But it cautioned that this was not the same kind of story that had played out just months before when A Fine Dessert, another story about happy slaves making sweet treats, was eviscerated by critics.

Submitted by Bearkat on January 7, 2016 - 1:10pm
Topic:
Book Reviews
Books
"For years, Mr. Gates, the co-founder of Microsoft who now focuses on the philanthropic work of the Bill & Melinda Gates Foundation, had been scribbling notes in the margins of books he was reading and then emailing recommendations to friends and colleagues. Then he began to post these recommendations and critiques on the blog. “A few years ago I started thinking it would be fun to share some of these notes with the public...” Mr.

Is History Written About Men, by Men?

Submitted by Bearkat on January 7, 2016 - 1:03pm
Topic:
Book Stores
Books
Publishing
"In recent years, as academic history has taken a turn toward the cultural and social, producing more and more works about women, minorities, and everyday life, the kinds of history books you see on the New Releases table at a Barnes & Noble have begun to feel like throwbacks." http://www.slate.com/articles/news_and_politics/history/2016/01/popular_history_why_are_so_many_history_books_about_men_by_men.html

A Brief History of Books That Do Not Exist

I have spent many pleasant nights imagining ghost books, those phantom texts of possibility and wonder. Their unprintable Dewey Decimal classifications divide them into (at the very least) three basic categories: books that can only be read once, books that cannot be read in one life time and the largest, aforementioned group, books that don’t exist.

The Best Facts I Learned from Books in 2015

Submitted by Bearkat on January 6, 2016 - 5:12pm
Topic:
Books
Kathryn Schulz: "Last year, I learned a piece of information so startling that I spent months repeating it to anyone who would listen. It came from my colleague Elizabeth Kolbert’s book “The Sixth Extinction,” and it is this: sixty-six million years ago, when the asteroid that ended the cretaceous period struck the Yucatán Peninsula, dinosaurs in Canada had roughly two minutes to live.

Where in the world has Almina Carnarvon been?

The Geisler Library at Central College in Pella, Iowa added the book "The life and secrets of Almina Carnarvon : a candid biography of the 5th Countess of Carnarvon of Tutankhamun" fame to their collection in August 2012. It has checked out via interlibrary loan 11 times in 3 years. The book has a subject connection with the popular television show Downton Abbey and that is likely the cause of some of the demand for the book.

One of the librarians made a map showing the travels of the book:
http://www.travellerspoint.com/member_map.cfm?user=GeislerILL&tripid=738041

The librarian that made the map passed on this additional comment - We joke that this book is out of Iowa more than it is in it.

WorldCat record for the copy held by the Geisler Library - http://www.worldcat.org/oclc/800850742