Just writing about nothing in particular

Alrighty. About three weeks ago we had a tornado touch down and take out the Andover area in the southeast corner of Ashtabula County.

Overnight into today? Tornado touch down took out part of the City of Conneaut along the Lake Erie shoreline. This was the northeast corner of Ashtabula County.

If this pattern keeps up, presumably the Geneva area in northwestern Ashtabula County is next.

Socialism quote of the day

What's with the Cranberry Banner Blake?

{this text is too short} Is it just for a change of pace?

Submitted by StephenK on April 10, 2010 - 11:11am
1. Finish The LISNews Bulletin 2. Do a check-print of the Bulletin since the printing costs have been fully funded 3. Finish writing freebie propaganda radio ad for New Jersey librarians (among others) to use 4. Ponder further this strap line: "American Libraries: Windows on our past...Bridges to our future" 5. Record and post the propaganda piece for use
Taxonomy upgrade extras:
Nothing

It's that time of the year...and since there seems to be some special relationship between librarians and peeps (can someone please explain that to me?)

Here's the Washington Post's celebration of the wee marshmallow treats, from their fourth annual Peeps Diorama Contest that drew more than 1,100 sugar-inspired entries. See the winner -- a candy-colored take on the movie "Up" -- and 37 of their favorites at the 'Peeps Show'. For Peep-0-maniacs, here's video of the top five entries including a sweet portrayal of the Margaret Wise Brown's classic "Goodnight Moon".

Power outages during snow storms are not fun. While power has been restored (for now?), the following handwritten bit of blogging is posted as an attached PDF talking about format diversification.

After reading both stories some might think that you can be warm and environmentally conscious at the same time.

And now the cat is into head-banging...

Our indoor/outdoor tomcat is having problems. We had to rearrange things. Since I got back from the day job, the cat has been spastic. He's been far more expressive than normal with fairly strange physical antics. Here's what happened.

The space here on the farm where we record LISTen suffered some structural damage recently. I had a spaghetti pot catching the leak as water dripped down from the ceiling of that space. We just had a damage assessment that indicates that that whole space is going to have to be repaired.

Sometimes I actually do do non-librarian things. This blog post talks about one of those projects. More about that project can be found at a certain site too.

My PICAW (Partner In Crime At Work) and myself found ourselves bored at work when we were covering the phones.
I randomly searched for unique names in our patron database and was quite surprised what names (first and middle) popped up. So what started out as a way to pass the time turned into a competitive game.

Our list became quite extensive and we have tried to keep it organized, somewhat...

We found out that our library system has its own "United Nations" of patrons' names when it came to countries along with some other cities.

This provokes some thought when it comes to the testing of theories and how generalizing from the part in lieu of the whole creates issues:

The Year in Buzzwords

It was a year for birthers, deathers and Tenthers to go all nine-iron on the Obama brand.

Catchphrases and buzzwords can tell us much about a year past — what resonated, what stuck, what the year revealed about the sensibility of the nation, whether you’re a wise Latina woman, a mini-Madoff, a teabagger or Balloon Boy.

Who knew there could be a word for a mother of eight?

Saving the Planet and Expanding the Mind 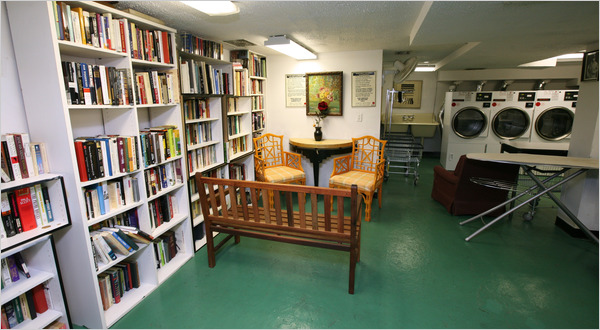 The laundry room-cum-library at 169 East 69th Street. Tenants in the building have elevated the urban use of apartment house basements as informal recycling centers into a high art.

Submitted by Bibliofuture on November 30, 2009 - 11:47pm
Taxonomy upgrade extras:
Nothing

Haves vs. Have-Nots at Public Universities

Opinion piece in the NYT

In 2007 in early November, the idea behind LISTen: An LISNews.org Podcast was proposed and approved. Over the course of November 2007 preparations were made for what has become a program that has spanned over ninety episodes. LISTen's third year of operations begins on 7 December 2009 when Pearl Harbor is also commemorated.

It has been an interesting run including a shift in operating base across the continent of North America. This was caused by the split into two parts of the operating base of Erie Looking Productions. Staff are now split between southern Nevada and northeast Ohio until June 2010 at the earliest.

Nobody knows what tomorrow may bring. Let's go forth boldly and make some history!

24 Months of LISTen by Stephen Michael Kellat is licensed under a Creative Commons Attribution-Noncommercial-Share Alike 3.0 Unported License.
Based on a work at erielookingproductions.info.

Submitted by Bibliofuture on September 29, 2009 - 8:32pm
Taxonomy upgrade extras:
Nothing

Sculpture titled "Listening to History" at the Meijer Sculpture Park

One of the problems in podcasting is that it is inherently more complicated than broadcasting. In broadcasting, you create your program and then feed it to a transmitter. Radio waves are generated by the transmitter which can then be picked up by a receiver properly tuned and within appropriate reception range. Podcasting definitely does not work that way. With such being files of pre-recorded material traversing the Internet, there are many potential points of failure. Podcasting is slightly more resistant than streaming multimedia to failure but neither is as easily understood by the consumer as broadcasts are.

To receive content, you should not have to be a specialist to receive it. Turning on a transistor radio to tune in your local NPR affiliate requires knowing how to turn a radio on, tune it to the station you want, and set your volume appropriately. Podcasting adds weightier layers of complexity when you have to have hardware that can process the received file, have to know how to subscribe to the feed, have to ensure that the files are in formats you can actually use, and more. These are major barriers to be surmounted.

Librarians face this conundrum every day. While librarians might like patrons to understand the joyful intricacies of Library of Congress Subject Headings or even Sears Subject Headings, that is the creation of an expectation that users could become specialists. The reference desk serves as the mediating layer that keeps the peace and otherwise makes things work.

The biggest drive as of late is to help push LISNews Netcast Network content over to radio. In case there are errors or bottlenecks preventing people from accessing podcasts, alternative access means would be appropriate. Whether it is low bandwidth availability, filtering, throttling, or worse there are possible cases where the Internet is not a wide open vista for some users. This is partly why the LNN Experimental Feed was inaugurated Sunday night to see if that could get around some of those problems.

How can the network get on radio? That is tricky if you have no money. The current kitty of funds for network operations is made up more of moths than hard currency. That precludes us utilizing "brokered airtime" arrangements at present.

The most viable step we can take is the Public Radio Exchange. This is a way NPR affiliates can license content. This also allows the network a tiny amount of revenue. Most pieces we have posted cost a station five dollars to license. This is a competitive marketplace for us to operate in but, according to the stats PRX has given us, nobody knows we exist.

For those worried about any talk of money changing hands in this, let me put your fears to rest. Trips to Cancun are not being planned. The battery in the audio editing laptop bit the dust Saturday after a hard life of three years. The non-smartphone PDA that was used for cueing sound effects in the past may or may not be brought back from the dead where it seems to be as I write. Replacing the laptop battery alone is likely to cost around a hundred dollars while the PDA cost will be between double to triple the cost of the battery. Maintaining equipment is a larger priority than junkets.

I wish I could do a whistlestop tour of the United States to promote the network to station program directors. We do not have the resources to fund that. We do have listeners who can help with our outreach.

How can listeners help? Call your local NPR affiliate and ask for the Program Director. If they have time, tell them about the LISNews Netcast Network and how we can help serve a niche in your community. If you get their voicemail, you could leave a message like this: "Hi, I'm (insert name here) and I think you should check out the L-I-S-News Netcast Network on Public Radio Exchange. In today's knowledge economy, they have material that you might be able to license for air. Check them out!"

Podcasts are normally resident on one server alone in being served up to end-users. If that server flickers, there become problems with distribution. Radio alternatives may help in the long run with resilience. Amidst the winds of hope and change, utterances by appointees leading the FCC and the FTC relative to Internet regulation tend towards this being a prudent course of action to start pursuing.

Contingency Planning by Stephen Michael Kellat is licensed under a Creative Commons Attribution-Share Alike 3.0 United States License.
Based on a work at erielookingproductions.info.