Heat Up Your Kindle With a Free Penny-Dreadful

It's a red-hot, red letter day for Amazon Kindle owners. The British Library has announced that 65,000 rare 19th century literary first editions will be offered as free downloads to owners of the device beginning in Spring of 2010. Thanks to a joint venture with Microsoft, the no-cost titles will reproduce the original type-face and illustrations from such classic works as Charles Dickens's Bleak House, Jane Austen's Pride and Prejudice, and Thomas Hardy's The Mayor of Casterbridge. 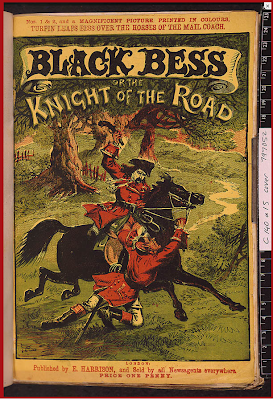 While having an electronic facsimile of a valuable first edition is a treat for fans of highbrow literature, what about readers seeking the pleasure that comes from biting into a nice, juicy, raw, piece of pulp? Can kinky Kindle owners looking for graphic kicks with a side of sensationalism find anything to sate their savage appetites from the staid British Library? Happily, along with the high class fiction, the UK library's freebies will also include the world's finest collection of cheap, tawdry, lowdown, lowbrow, Victorian trash. Get ready to heat up your cold Kindle with a torrid "Penny Dreadful."

Book Review: The Man Who Loved Books Too Much

Is it possible to love books too much? Writer Allison Hoover Bartlett thinks so, given the reaction she often gets to her new book, The Man Who Loved Books Too Much.

"I can't tell you how many people have picked up the book and read the title and said, 'Huh! That's me,' " Bartlett says.

"Some people care so deeply about books," she adds, "they're willing to do just about anything to get their hands on the books that they love."
The book tells the story of the light-fingered bibliophile John Gilkey, and how antiquarian bookseller, Ken Sanders tracked, identified and exposed the thief. Story from NPR.

Former NFL star gets a kick out of rare books

Former NFL star gets a kick out of rare books
After Pat McInally signed his rookie contract with the Cincinnati Bengals in 1975, the first thing he did with his new-found wealth was also the least likely: He bought a vintage book collection for the copy of "Winnie the Pooh" it contained.

Submitted by Martin on December 17, 2009 - 2:19pm
Topic:
Rare Books
<a href="http://www.sciencedaily.com/releases/2009/12/091211203717.htm">Scholars have argued </a>for nearly 70 years over a 44-page codex, known as the Archaic Mark, that contains the complete 16-chapter text of the Gospel of Mark in minuscule handwritten text. The manuscript, which also includes 16 colorful illustrations, has long been believed to be either an important witness to the early text of the gospel or a modern forgery. An exhaustive, multi-disciplinary examination has determined that it is . . . .

Submitted by Martin on December 4, 2009 - 9:41am
Topic:
Rare Books
Father Stewart is a Benedictine monk at a small Catholic university in Minnesota. For the past several years he has also been the director of a project to find and digitize manuscripts held in monastic communities in the Middle East, Europe, and Africa. Since 2003 he has overseen the imaging of some 17,500 manuscripts. Over the decades, the museum has made a photographic record of more than 110,000 manuscripts — an estimated 35 million pages’ worth — shifting from microfilm to digital imaging as the technology has evolved. Lately it has run 15 to 20 projects a year.

Submitted by Bearkat on November 23, 2009 - 2:29pm
Topic:
Rare Books
"A first edition of Charles Darwin's groundbreaking Origin Of Species, which languished for years in a toilet, will go under the hammer this week, on the 150th anniversary of the book's publication." Read more from the <a href=http://www.independent.co.uk/arts-entertainment/books/news/rare-darwin-book-found-on-toilet-bookcase-1825928.html>The Independent,</a>

Syria: Islam's Most Important Library to Reopen in Aleppo

Submitted by Lee Hadden on October 15, 2009 - 1:47pm
Topic:
Rare Books
After decades of neglect, one of Islam’s most important libraries is about to reopen in Aleppo, offering scholars access to some 70,000 books and rare works of art, and shining a light on a centuries-old tradition of learning. Aleppo, Syria’s second city, is one of the oldest continuously inhabited cities in the world, outdone only by Damascus. It has also been a centre of scholarship for millennia, especially for the three Abrahamic faiths. Islamic scholarship, in particular, thrived there during the Middle Ages. Read more about it at: http://arabdetroit.com/news.php?id=1011

Harvard College Library and the National Library of China have agreed to digitize one of the largest collections of rare Chinese books outside of China, according to The Associated Press. The aim is to increase access while reducing the amount of physical contact with the Harvard-Yenching Library’s 51,500 volumes, some more than 1,000 years old and covering subjects like history, philosophy and drama.

After 64 years, veteran Robert E. Thomas returns books that he took from a salt mine in Germany during WWII that contained national treasures hidden by the Nazis. Both books were incunabula, one written in Latin and one in German. The National Archives facilitated the transfer.

DENVER -- Who knew bed bugs could be book worms?

The Denver Public Library had to quarantine and fumigate four areas at the main branch in just the past three weeks because of bed bugs, KMGH-TV in Denver reported.

The tiny insect is being spread by a customer trying to preserve rare books, but ironically it's because of his actions that the books now have to be destroyed.

"Some of the bed bugs fell out of those materials that had been returned," said Denver Public Library spokeswoman Celeste Jackson.

The infected books came from 69-year-old Denver resident Roger Goffeney. He checks out historic books, some 200 years old, and helps archive them online in an effort called the Gutenberg Project.

Submitted by Pete on September 17, 2009 - 12:21pm
Topic:
Books
Google
Book Stores
Rare Books
Publishing
Wired's <A href="http://www.wired.com/epicenter/2009/09/google-books-publish-on-demand/">Epicenter blog</A> details the latest venture to come out of Mountain View CA, public domain books printed on demand. "What’s hot off the presses come Thursday? Any one of the more than 2 million books old enough to fall out of copyright into the public domain. And now Google Book Search, in partnership with On Demand Books, is letting readers turn those digital copies back into paper copies, individually printed by bookstores around the world."

Submitted by Lee Hadden on September 14, 2009 - 12:51pm
Topic:
Rare Books
Not even a civil war could stop the old bookbinder of Beirut Riyad is a man who gives context to this city in which I have lived these 33 years Saturday, 12 September 2009 They call him "Sheikh Tijlid" – Sheikh Binder – because he is the oldest and the most honoured bookbinder in Beirut. There are only five left in Lebanon, repairing old newspapers, handwritten 17th-century Korans, ministry archives, cutting and pasting and then modelling fine leather covers and impressing on that wonderful soft leather the title of each volume in gold leaf.

It Takes All Kinds...First Folio Thief Arrives at Court in Style

A man accused of stealing a Shakespeare folio valued at £3m arrived for a court appearance in a horse drawn carriage; report with video at BBC.

Raymond Scott, 52, of Wingate, County Durham, was dressed in Highland tartan and was accompanied by a bagpipe player at Durham Crown Court on Friday.

He faces charges relating to the theft of a first folio that went missing from Durham University Library in 1998.

Baseball Auction Has Stolen Items, Including from NYPL

While the Federal Bureau of Investigation examines whether some materials that were supposed to be sold at Major League Baseball’s All-Star Game auction next week were stolen, a baseball historian offered evidence indicating that at least one of the items was taken from the New York Public Library.

The Codex Sinaiticus is the oldest surviving Christian Bible, dating from around 1,600 years ago. For all but 100 of those years, it sat in a monastery in Sinai.

800 pages of the book, written in Greek on parchment, are now available online for the world's perusal.

More on this story from the BBC site which includes an audio report about how the Codex was discovered and what it took to put it online.

You won't have to leave your chair to see the Gutenberg Bible (1455) anymore.

That and the first printed edition of Homer's works are among ancient books being published online by Cambridge University Library over the next five years.

The money for the project has come from the Andrew W Mellon Foundation.

Submitted by chively on April 27, 2009 - 10:57am
Topic:
Rare Books
A globe-spanning UN digital library seeking to display and explain the wealth of all human cultures has gone into operation on the Internet, serving up mankind's accumulated knowledge in seven languages for students around the world. <a href="http://www.chicagotribune.com/news/nationworld/chi-library_tab_22apr22,0,1841137.story">More here</a>:

A librarian at Oxford's Bodleian Library has unearthed the earliest-known book dust jacket. Dating from 1830, the jacket wrapped a silk-covered gift book, Friendship's Offering. Silk bindings were very vulnerable to wear and tear, so bookselllers would keep them in these wrappers to protect the binding underneath. When you bought the book you would take the wrapper off and put it on your shelves, which is presumably why so few of these covers have survived.

Unlike today's dust jackets, wrappers of the early 19th century were used to enfold the book completely, like a parcel. Traces of sealing wax where the paper was secured can still be seen on the Bodleian's discovery, along with pointed creases at the edges where the paper had been folded, showing the shape of the book it had enclosed.

The jacket had been separated from its book, and had never been catalogued individually. It remained hidden until the library was contacted by an American scholar of dust jackets looking for the earliest known example.