Picture Caption: The Used Book Superstore in Nashua, N.H., occupies the space that once housed an electronics chain. The store has an inventory of 100,000 books that are organized on metal shelves.

Resale and thrift merchants around the country are growing by sticking to a simple business model: high volume, low cost of goods and cheap rent. The economic downturn created an opportunity these for-profit businesses to move into larger spaces once occupied by giant big-box stores.

Volunteers help move 150,000 books from condemned store
A condemned building once full of books is now empty thanks to the helping hands of the community. Nearly 100 people helped Daughtry's Old Books on Front Street pack up Saturday.

The Borders bookstore in downtown Ann Arbor is dog-friendly no more reports OhMiDog.

After years of allowing dogs, the bookstore has decided to enforce the chain’s company-wide policy prohibiting pets from entering. “We prioritize the safety and happiness of our customers,” Borders spokeswoman Mary Davis said. “We think that it’s important to put this particular store in line with our other stores, which currently only allow service dogs.”

AnnArbor.com reports that the store’s general manager said she had “received a number of complaints about the dogs, some of which she described as ‘nasty,’” (meaning the complaints, I’m pretty sure, and not the dogs).

Borders declined to specify the nature of the complaints. At least one was made to county health authorities, who pointed out the store, since it houses a coffee shop, is licensed as a food service establishment.

Some patrons expressed sadness about the new no-dog policy.

Submitted by birdie on February 20, 2010 - 12:28pm
A trailer from the documentary about the struggle of independent bookstores to survive in a big box/internet culture... Paperback Dreams.

Two Centuries of Books in a Pennsylvania Barn

Two Centuries of Books in a Pennsylvania Barn
What might differentiate his shop from America’s throngs of ailing independent bookstores are the architecture and the intentional chaos. On five floors antique fruit crates advertising brands like Boy Blue and Lake Gold help hold up 200,000 volumes published over the last 200 years.

Raven Used Books on Flickr. The picture has this caption - I like the sign but this is more about angles than the book store. (I think the picture has some very neat and subtle angles that play with your eyes)

Why are you for killing bookstores?

Those of us in the book business have to choose which anti-social position we want to take.

Some people are for the most rapid possible adoption of ebooks. They can be cheaper. They don’t require paper which pollutes when you create it and adds carbon footprint every time you ship it around. They have much greater functionality, or at least the potential for it. They enable business models that don’t require capital-intensive infrastructure.

Say goodbye to yet another dusty, musty piece of vanishing Manhattan.

All that's now left of Skyline Books is a sign in the window reading "End of an Era. Thanks for 20 Great Years."

That's how long Robert Warren's used book store at 13 W. 18th St. lasted - a kind of hole-in- the-wall home to a universe of rare books, from first editions of Beat Generation classics like "The Dharma Bums," to pornographic Italian comics to an autographed copy of Charles Bukowski's "Post Office."

The wild weekend of Amazon and Macmillan

Now I swear all this is true. As everybody knows, a very serious food fight broke out between Amazon and Macmillan late Friday night. All weekend Michael Cader led the way in ferreting out additional useful information and I spent most of today (Sunday) trying to write an analytical blogpost. I got it just about finished in the early afternoon, and the bottom line to what I’d written was “Amazon will not be able to sustain this.”

I decided to hold the post until after going to see Crazy Heart this afternoon and, when I came home, Amazon had already folded. But I had written a post that provided a lot of useful information, even if events had stolen my punchline.

So I’m giving it the once-over to edit it for the reality that Amazon has already announced that they will not continue to boycott Macmillan books.

Laredo, Texas left with no bookstore

On January 16, Barnes & Noble, which owns B. Dalton, closed the store inside Laredo's Mall del Norte.

That leaves Laredo, Texas, population of 250,000, one of the largest cities in the United States without a bookstore

Marriage made in Heaven? Cats and Books

Blog post from the Seattle PI-Online about the frequent pairing of cats and books. 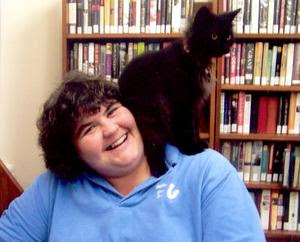 Boulder Book Store won't say which writer tried to steal his own book
Scott Foley, who is now the floor manager for the Boulder Bookstore, wouldn't disclose the name of the thieving author but said his attempt to swipe his own tome has become an infamous story told during security training for new bookstore employees.

"We have a series of video and camera shots we show them, and he happens to be on that list," Foley said.

We are all suffering from the closing of independent bookstores, but Linda the bookstore cat is going to have a particularly hard time of it when NYC indie Skyline Books closes later this month.

Here's the story, from Gothamist.

Book Review: The Man Who Loved Books Too Much

Is it possible to love books too much? Writer Allison Hoover Bartlett thinks so, given the reaction she often gets to her new book, The Man Who Loved Books Too Much.

"I can't tell you how many people have picked up the book and read the title and said, 'Huh! That's me,' " Bartlett says.

"Some people care so deeply about books," she adds, "they're willing to do just about anything to get their hands on the books that they love."
The book tells the story of the light-fingered bibliophile John Gilkey, and how antiquarian bookseller, Ken Sanders tracked, identified and exposed the thief. Story from NPR.

Book Publishing 10 Years in the Future

Predictions from Smashwords (they publish and distribute ebooks) via Galley Cat:

1. 95% of all reading will be on screens.
2. There will be fewer bookstores, though books will be more plentiful than ever before.
3. The entire book supply chain from author to customer will become atomized into its component bits. Value-adders will continue to find great success in publishing.
4. Most authors will be indie authors.
5. Successful publishing companies will be those that put the most net profit in the author's pocket.
6. If the big six NY book publishers (the fat head) today publish 50% of what's sold, and the long tail of thousands of indie publishers comprise the rest, then 10 years from now the fat head will shrink to 10% and the long tail will get both taller and longer.
6. There will be more published authors than ever before, and collectively they will earn record revenues, yet individually the average "published" author 10 years from now will earn less than the average "commercially published" author today.
7. 10 years from now, we will all be authors, publishers and booksellers
8. Digital books will most commonly be referred to as "books," not ebooks.
9. For those who still call books ebooks, it'll be spelled "ebook," not E-Book or e-book. Who today still calls email E-Mail?
10. Authors will write for a global market.

A baker’s dozen predictions for 2010

Here is the first prediction:

1. At least one major book will have several different enhanced ebook editions. This will result from a combination of circumstances: the different capabilities of ebook hardware and reader platforms, the desire of publishers and authors to justify print-like prices for ebooks, the sheer ability of authors and their fans to do new things electronically, and the dawning awareness that there are at least two distinctly different ebook markets: one just wants to read the print book on an electronic screen and the other wants links and videos and other enhancements that really change the print book experience. (Corrolary prediction: the idea of an enhanced ebook that is only sold “temporarily” in the first window when the book comes out, which has been floated by at least one publisher, will be short-lived. Whatever is made for sale in electronic form will remain available approximately forever. Or, put another way, if you have a product that requires no inventory investment that has a market, you’ll keep satisfying it.)

No sales taxes on Kindle e-books, please—and here’s why

How's This for Larceny? Stealing Your Own Books

A recent New York Times article about book thefts has the online community atwitter about one mysterious Boulder author accused of feeling a little too entitled to the fruits of his labor.

In taking a national snapshot of the shoplifting problem, the Times story cut to Boulder, where "one writer was even busted stealing his own books." The Times, which didn't name the author, talked to Christopher Ohman, who was manager of the Boulder Book Store at the time.

"I think he felt somewhat entitled to the copies," Ohman told the Times, conceding that the author's alcohol problem might also have led to the attempted theft.

"In some ways, I can kind of understand that logic," he said. "I mean, it's a commonly held misconception that authors get as many copies of their books as they want, and that's not always the case."

Scott Foley, who is now the floor manager for the Boulder Bookstore, wouldn't disclose the name of the thieving author but said his attempt to swipe his own tome has become an infamous story told during security training for new bookstore employees.

Speculation as to the identity of the thief is engaged in on Gawker.

Amazon and Walmart were not the first

In the news recently has been the fight between Walmart and Amazon over book prices. There has been discussion of what impact this would have on the publishing industry. I found an interesting/funny picture of a bookmark on Flickr that shows that book discounting in chain stores is not a new thing.