End Of Days For Bookstores? Not If They Can Help It

Excerpt: There was a time, not so long ago, when chain bookstores had a pretty bad reputation. Barnes & Noble and Borders were seen as predators eager to destroy local booksellers — and neighborhood bookstores were weathering threats from all sides. Megastores like Costco started selling bestsellers and encroaching on local shops. Then came a little company called Amazon, and the rise of online book buying. The indies were struggling to make ends meet, and many had to close their doors.

But these days, independent bookstore owners Rebecca Fitting and Jessica Stockton Bagnulo of Greenlight Books in Brooklyn argue that the struggling local bookstore is a thing of the past.

"That was the only story people — especially in media — could wrap their heads around," Bagnulo says. " 'Oh isn't it sad that all the independent bookstores are dying and they are being destroyed by chains!'"

Now, the tables have turned. In the era of online buying and the e-book, both currently dominated by Amazon, the big chains are in trouble — and new technologies may provide independent bookstores with a lifeline.

A great photo of a Boston area book store that made it's rounds on Boing Boing yesterday!

A hot Christmas may be followed by a chilling Spring

I’m expecting that what brick-and-mortar booksellers will experience in the first six months of 2011 will be the most difficult time they’ve ever seen, with challenges escalating beyond what most of them are now imagining or budgeting for. If I were programming a show for six months from now for the book industry, I’d plan for that to be Topic A.

Tragic story out of Salt Lake City. Police are investigating the fatal stabbing of bookseller Sherry Black who was killed in the shop she ran with her husband, B&W Billiards and Books, 3466 S. 700 East.

"She was physically beaten and stabbed more than once," Keller said. "Her wounds did cause a considerable amount of blood loss at the crime scene."

The Deseret News has learned about a transaction in which Black purchased rare, stolen LDS books from a Juggalo gang member with a history of making threats. The incident occurred in February of 2009.

Lorin Nielsen, 20, was arrested and charged with stealing books from the Bluffdale home of his father, who is a polygamous church president. Nielsen pleaded guilty in April 2009 to theft, a third-degree felony, and theft by deception, a second-degree felony. He was sentenced to 90 days in jail.

In March 2009, Nielsen's father told detectives he had noticed some rare LDS books missing from his home library, according to police reports. He reviewed security camera footage and saw his son removing the books on Feb. 20, when he had been at the home for a funeral. The home also functions as a church meeting place.

When the father showed the video to his son, Nielsen admitted taking the books and said he sold them at Black's B&W Billiards and Books store, police reports state.

Article in the Travel section of the NYT

ON a balmy fall evening in the Mission District of San Francisco, hundreds of people spilled onto Valencia Street, where they chatted happily for a few minutes before pouring back into bookstores, cafes and theaters. It was a giddy, animated crowd, but most of all bookish — a collection of fans and believers, here to listen to the written word.

Bush=war criminal? RT @oblongirl: Whoa. Just found DECISION POINTS moved into fiction by a customer and found this inside.

"Mamnoueh maqroubieh," goes the Arabic proverb. All that is forbidden is desired.

Article in the LA Times: In Jordan, a bookstore devoted to forbidden titles

"There are three no-nos," the owner of Al Taliya Books explains with a big smile. "Sex, politics and religion. Unfortunately, that's all anyone ever wants to read about."

Report of the death of bookselling legend Carla Cohen from the Washington Post and a full obituary here.

View some amazing photos of her long years at the iconic bookshop on Connecticut Avenue NW, Washington's most prominent indie here.

Picture Books No Longer a Staple for Children

Picture books are so unpopular these days at the Children’s Book Shop in Brookline, Mass., that employees there are used to placing new copies on the shelves, watching them languish and then returning them to the publisher.

“So many of them just die a sad little death, and we never see them again,” said Terri Schmitz, the owner.

The shop has plenty of company. The picture book, a mainstay of children’s literature with its lavish illustrations, cheerful colors and large print wrapped in a glossy jacket, has been fading. It is not going away — perennials like the Sendaks and Seusses still sell well — but publishers have scaled back the number of titles they have released in the last several years, and booksellers across the country say sales have been suffering.

In Bookstore’s End, No Joy for Sidewalk Seller

Charles Mysak sees a decline in the life of the mind from his perch selling used books along Columbus Avenue.

Bob Dyer, Akron Beacon Journal columnist writes: At many area Walmarts, the book section is extremely well-organized. The self-help books are here . . . the religion section is there . . . cooking and diet books farther down . . . and right over here is the black section.

The ''black section'' contains everything written by and about blacks: romance novels, self-help books, religion, sports, even an autobiography by the current president of the United States.

Now, whether or not you're a fan of Barack Obama, can't we at least agree that the thing that defines him is not his skin color but his job title? We have lots and lots of African-Americans in this country — about 38 million, according to the U.S. Census Bureau — but during this country's entire 234-year history we have had only 44 presidents.

Yet there he is, right in the middle of six monochromatic shelves, peering out at us from the cover of The Audacity of Hope.

The reporter of this piece in the Ohio.com asked WalMart to respond to book placement. When asked why many of its stores have a ''black section'' that lumps together everyone from romance novelists to preachers to the president of the United States — even though they have little in common beside skin color — WalMart Stores Inc. responded without really responding.

At Bookstore, Even Non-Buyers Regret Its End

On Monday afternoon, Jai Cha walked out of the Barnes & Noble at 66th Street and Broadway in Manhattan as he does nearly every week — without a book.

“I’m just killing time,” said Mr. Cha, a 30-year-old lawyer, his hands stuffed deep in his pockets. “I’ve been coming here to read Bill Simmons’s ‘Book of Basketball,’ about a chapter at a time.”

He might have to hurry. Barnes & Noble announced on Monday that at the end of January it would close the store, a four-story space across the street from Lincoln Center that has been a neighborhood landmark since it opened nearly 15 years ago.

Submitted by rteeter on August 30, 2010 - 9:23pm
Topic:
Book Stores
<a href="http://www.mercurynews.com/bay-area-news/ci_15942904">San Jose Lesbian and feminists mourn loss of Sisterspirit</a> Bookstore beloved of Lesbian and feminists to close. Online bookstores and the acceptance of Gay literature in chain bookstores are blamed. (Sorry to censor, but this site's spam filter wouldn't accept this submission otherwise.)

Bookstore Arrives, and Sides Are Taken

New York Times: WESTHAMPTON BEACH, N.Y. — Ever since Books & Books opened its doors on Main Street here last month, it has missed out on some of the adulation usually reserved for new independent bookstores in the age of Amazon.

Several storeowners nearby have ordered their staffs not to shop there. Indignant older women have marched inside the bookstore to yell at employees. And someone, or perhaps several someones, may have sneakily placed used chewing gum between the pages of new books.

The animosity seems to have stemmed from the fact that Books & Books moved in when there was already an independent bookstore, the Open Book, around the corner. And as some people saw it, there was no room for another one.

"Saying that bookstores won't be around in the future because Wal-Mart and Amazon sell books is like saying Italian restaurants will go out of business because we have canned spaghetti sauce."--Michael Norris, a senior analyst at Simba Information, in a Houston Chronicle piece headlined "Booksellers buck e-trend: Analysts say there's a place for stores that do their job well."

Quick Change in Strategy for a Bookseller 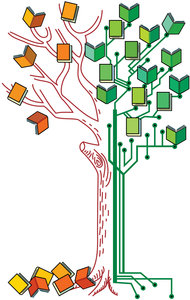 Where do we lose the shelf space and how much do we lose?

There are two questions about the impact of digital change on publishing that are just about impossible to answer.

One is: how much of the sale of ebooks is incremental business and how much of it is cannibalization of prior print sales?

The other is: what will be the fate of independent bookstores?

The two are connected.

A Look at Who May Bid for Barnes & Noble

Now that Barnes & Noble has officially put itself up for sale, it’s time to ask: who may place a bid for America’s biggest brick-and-mortar bookseller?

Story in the NYT 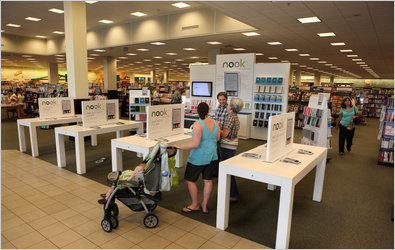 In-house boutiques are Barnes & Noble’s latest front in the battle with Amazon over their competing e-reader devices.

Bookmobile Gets Second Life as a Bookstore

Lafayette Bookstore in CA has had to close its bricks-and-mortar store, but will keep on trucking as the Bay Area Bookmobile.

"Big Blue" is a bookmobile that was decommissioned from the Ypsilanti (MI) District Library and was acquired and driven to the Bay Area during the week of June 20. The store is having a Saying Goodbye to the Brick-and-Mortar Party Thursday evening that will include "a ritual marking our move from the old to the new--we're doing a bucket brigade to move all the books from the new section of the bookstore into the bookmobile."

The store will have Lafayette Book Store and Bay Area Bookmobile Facebook pages and continue sending out the newsletter. As owner Dave Simpson wrote: "We'll be active there with a schedule of appearances, announcements of author signings and events, and as always, our book recommendations (and you can offer your own!). Come join the conversation!"