The Relevance of Bookmobiles and Mobile Libraries in 2018

Fast forward thirty years. The magic of the bookmobile remains. But the magic has evolved. Whereas the bookmobile of my youth was a place for my imagination to run amok (and today’s bookmobiles still provide this outlet for all), bookmobiles today have changed the way a library connects to the people it serves. Bookmobiles today serve a more effectual purpose than before—but that is not to say bookmobiles of my youth were ineffectual. As a valued part of any library’s arsenal, bookmobiles today help to disseminate information, erase barriers, and equalize opportunity for all patrons—much like in the past, only in different guises today. Bookmobiles today have spawned other mobile outreach vehicles: vans, buses, campers, bicycles, and scooters; and it is within all these different vehicles that a new type of outreach has developed.

From The Relevance of Bookmobiles and Mobile Libraries in 2018 » Public Libraries Online
Topic:
Book Mobiles

The Bookmobile Interview From StoryCorps

Growing up in the 1960s, Storm Reyes lived and worked in migrant labor camps across Washington state. When she was 8 years old, she began working full-time picking fruit for under a dollar an hour. At StoryCorps, Storm shared stories of her difficult childhood with her son, Jeremy Hagquist, and remembers the day a bookmobile unexpectedly arrived, opening up new worlds and bringing hope.

Submitted by birdie on April 19, 2017 - 12:31pm
BAGHDAD (AP) — The Iraqis guarding Baghdad’s many checkpoints, on the lookout for car bombs and convoys, don’t know what to make of Ali al-Moussawi when he pulls up in a truck displaying shelves of glossy books. The mobile bookstore is the latest in a series of efforts by the 25-year-old to share his passion for reading and revive a love for books in Baghdad, which was once the literary capital of the Muslim world but is now better known for bombs than poems.

The Power of Mobile Libraries, a StoryCorps Animation: 'The Bookmobile'

In "The Bookmobile," a StoryCorps project, a young Native American girl shares a tale of discovery.

From The Power of Mobile Libraries, a StoryCorps Animation: 'The Bookmobile' - CityLab
Topic:
Book Mobiles

One woman has started her own effort to make sure more kids get their hands on books this summer. With help from local business Nickel City Cycles, she plans to hit the streets of Buffalo by bike and hand out free books along the way. Amy Ozay, who started the movement in the Queen City, moved to Buffalo from Cambridge, Massachusetts, where people gave out free books on bikes.

An Indonesian villager is encouraging rural children to read by delivering books with his free mobile library on the back of his favorite horse Luna.

Three times a week Ridwan Sururi, 42, travels with his "horse library" on the dirt tracks of Indonesia's Central Java Province to provide books for young readers in an area where libraries are rare and school resources are limited.

"The purpose of this library is to encourage reading. The reason why I used the horse is because, in my opinion, the horse attracts children," Sururi explained.

All of the books in the mobile library were given to him by friends and donors.

In 2013, school librarian Alicia Tapia created Bibliobicicleta, a free, mobile library pulled by bike. Since then, Tapia and Bibliobicicleta have rolled up to San Francisco parks, farmers markets, museums, and beaches to distribute free books and help spread a love of reading.

Toronto library to roll out book-lending machine at Union Station

Submitted by Anonymous Patron (not verified) on August 6, 2015 - 12:28pm
Topic:
Book Mobiles
http://www.thestar.com/news/gta/2015/08/05/toronto-library-to-roll-out-book-lending-machine-at-union-station.html Checking out books from the library is about to get easier for commuters. The Toronto Public Library hopes to roll out a book-lending machine at Union Station by the end of the year. If it’s successful, more could be on their way. The move is a novel idea aimed at making the library more accessible to Torontonians and broadening the number of users, which sits around 18.5 million annually.

Bookmobiles have been a fixture of rural American life since the 19th century, when horse-drawn book wagons stenciled with gold lettering read Free Library. There were low-slung black panel trucks in the 1930s, side doors open to shelves, with children sitting on the wide fenders turning pages.

In the Riverside (CA) Public Library recently, I read the catalog from the Gerstenslager Co. in Wooster, Ohio, which built bookmobiles for the nation. Children and adults stood in line to ascend a few stairs and be inside a real library, albeit one with shelves set on a slight incline, so books wouldn't fall out when the coach was moving.

Laurence Copel, youth outreach librarian and founder of the Lower Ninth Ward Street Library in New Orleans, is the inaugural recipient of the Lemony Snicket Prize for Noble Librarians Faced with Adversity. On June 29, Daniel Handler (aka Lemony Snicket) will present her with a $3,000 check, $1,000 travel expenses, a certificate and "an odd object from Handler's private collection" during the American Library Association's Conference & Exhibition in Las Vegas.

"Copel is recognized for her extraordinary efforts to provide books to young readers of the Ninth Ward," said ALA president Barbara Stripling, adding that she "is a brilliant example of how librarians can serve as change agents. Her leadership and commitment show the vital role that librarians and libraries play in energizing and engaging the communities that they serve." 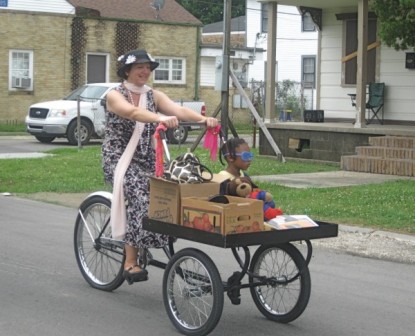 Known to the children in the Lower Ninth Ward as the Book Lady, Copel moved to New Orleans from New York City in 2010 and opened a library in her home through self-funding and small donations while living on $350 a week. She also converted her bicycle to a mobile book carrier allowing her to reach children and families that could not travel to her home. Story via Shelf-Awareness.com.

Once Forbidden, Books Become A Lifeline For A Young Migrant Worker

Growing up moving from farm to farm, Storm Reyes had to pack light. That meant no books. She felt hopeless about the future, until a bookmobile appeared in the fields and changed her life. 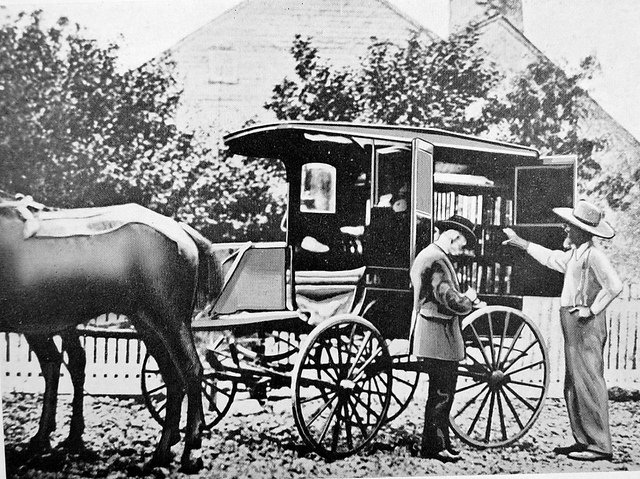 From NPR, a new program to deliver books to Seattlites via bike.

By the loading dock of Seattle's downtown library, librarian Jared Mills checks his tire pressure, secures his iPads and locks down about 100 books to an aluminum trailer the size of a steamer trunk. The scene is reminiscent of something you'd see in an action movie, when the hero is gearing up for a big fight, but Mills is gearing up for something very different.

"If you're not prepared and don't have a lot of experience hauling a trailer, it can be kind of dangerous," Mills says, especially when you're going downhill. "The trailer can hold up to 500 pounds."

Mills is part of Seattle Public Library's Books on Bikes program, which aims to keep the library nimble and relevant by sending librarians and their bicycles to popular community events around Seattle.

After a hilly, 5-mile bike ride to a local farmers market, Mills sets up shop among the fruit and vegetable booths. The bright orange trailer is custom-made with bookshelves and an umbrella holder (it is Seattle, after all).

Malena Harrang, in her early 20s, is visiting the market with a friend. She says Mills' book station is "like [a] carbon-neutral library on wheels — doesn't get better than that."

By combining the concepts of bookmobile and food truck, book-publisher Penguin Group (USA) recently introduced its first mobile bookstore. And just like a good book, there’s a bonus inside: the Penguin Book Pushcart, which rolls out of the truck and down a ramp to make books even more accessible.

"I was concerned that there wasn't going to be any library service," said Kysar, who lives in Yacolt. "I called to see what the plan was, and there wasn't any plan."

At the same time Kysar was talking to representatives from the library district, other community members began talking to Jeff Carothers, then a mayoral candidate and now mayor, about opening a library branch in the rural community just north of Battle Ground, which reported a population of 1,556 in the 2010 census.

Reinventing the bookmobile in Texas with The Billy Pilgrim Traveling Library

Submitted by Anonymous Patron (not verified) on October 19, 2012 - 2:15pm
Topic:
Book Mobiles
Libraries
Librarians
Announcements
Plugs
<a href="http://thebptl.wordpress.com/">The Billy Pilgrim Traveling Library</a> is a Houston-area bookmobile created by two recent library school graduates, hitting the streets in 2013. It will be a traveling library built from personal libraries and donations, based on a rent/barter/trade system AND a physical resource maintained by professionals that is open to partnerships and collaborations with organizations like schools, libraries, museums, nonprofits, and local artists.