US court grants Elsevier millions in damages from Sci-Hub

Submitted by Bibliofuture on June 23, 2017 - 1:14pm
One of the world’s largest science publishers, Elsevier, won a default legal judgement on 21 June against websites that provide illicit access to tens of millions of research papers and books. A New York district court awarded Elsevier US$15 million in damages for copyright infringement by Sci-Hub, the Library of Genesis (LibGen) project and related sites.

Submitted by birdie on June 21, 2017 - 3:08pm
The alleged perp checked out a book and thus the staff was unable to give her the name of the driver.

Here's the story from WSBTV in Atlanta. The woman whose car was hit feels as if she's being unfairly discriminated against.

New York Times has a lovely feature on Italian libraries and their treasures, inside and out. 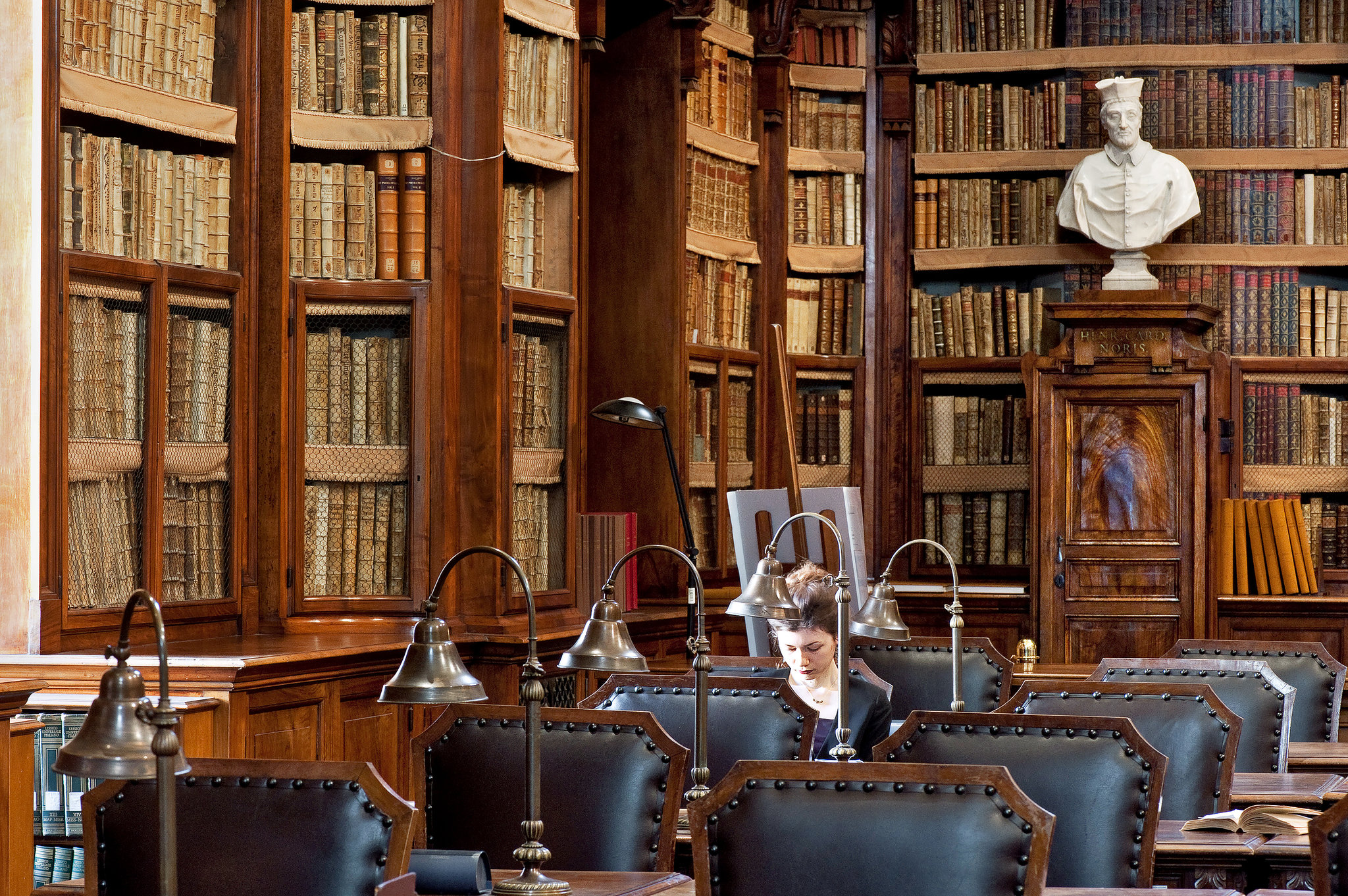 Submitted by birdie on June 7, 2017 - 11:17am
The Missoulian has a report on the slashing of the budget for Talking Books in Montana libraries.

The proposed cuts merge the Talking Book Library and eliminate the program’s director and one of three reader’s advisers.

Submitted by Bibliofuture on June 6, 2017 - 10:58am
The museum dedicated to Theodor Geisel — who under the pen name Dr. Seuss wrote and illustrated dozens of rhyming children's books including "The Cat in the Hat" and "Green Eggs and Ham" — features interactive exhibits, artwork never before displayed publicly and explains how his childhood experiences in the city about 90 miles (145 kilometers) west of Boston shaped his work. Full article
Topic:
Authors

After Words with Senator Ben Sasse

Senator Ben Sasse (R-NE) talked about his book The Vanishing American Adult: Our Coming-of-Age Crisis--and How to Rebuild a Culture of Self-Reliance, in which he looks at how to engage adolescents and young adults to become independent, active, and engaged citizens. He was interviewed by Steven Olikara.
See video here: https://www.c-span.org/video/?428117-2/words-senator-ben-sasse
Topic:
Books

What should we keep?

Submitted by Bibliofuture on May 31, 2017 - 8:09pm
In which John looks at the one photograph of his 23-year-old self, considers what to keep from life, and wonders what (if anything) from nerdfighteria should be professionally archived. Also considered: Whether there will be humans for much longer, digitial archiving efforts, and what pictures do.

John was contacted by a librarian and that is one reason behind the creation of this video.

Submitted by birdie on May 30, 2017 - 9:15am
From Colorado Public Radio a piece about the main library and how staff are trying to safeguard library visitors.

One person recently died in the library bathroom from a drug overdose. That inspired the library to began a program to instruct staff how to administer the drug antidote, Narcan.

"A lot of the root causes of the behaviors that are finding their way through our doors are happening throughout Denver, and that's daunting,” said Chris Henning, communications manager for the Denver Public Library. “We're trying to do what we can do specifically for our facilities to make sure they're safe. And at the same time, help the city address these bigger problems. These societal problems however we can to try and make an impact on that, because they're just coming at us at a rate that we have not seen before."

It's Out! This is What a Librarian Looks Like

Submitted by birdie on May 22, 2017 - 12:20pm
From The Huffington Post news of the publication of This Is What a Librarian Looks Like by Kyle Cassidy. Kudos to the authors and the participants! Tell us your thoughts about participating and the finished product in the comments below.

A look back at Silicon Valley's adolescence

The images, captured on film, often in black and white, are also being brought into the digital age, alongside the millions of others that comprise the Chronicle’s photo archive. Negatives and prints are gradually being scanned, and some of the best are being featured in the Instagram account SF Chronicle Vault. Atlas Obscura spoke with Timothy O’Rourke, Assistant Managing Editor of the Chronicle and Executive Producer of SFChronicle.com, about organizing millions of images, sharing San Francisco’s history, and stumbling across the perfect image.

From How San Francisco Chronicled Its Own Tech Boom - Atlas Obscura
Topic:
Technology

Submitted by Bibliofuture on May 19, 2017 - 12:11am
The much-buzzed-about conference generated a gargantuan list of intriguing book recommendations https://www.inc.com/jessica-stillman/50-books-recommended-by-this-years-ted-speakers.html
Topic:
Books

It takes a certain something to be a good storyteller: enthusiasm, timing and a flair for the dramatic. Performers at a children's story hour at a New York City library have all that and then some — they're drag queens. About once a month since last fall, the Brooklyn Public Library has been presenting Drag Queen Story Hour, where performers with names such as Lil Miss Hot Mess and Ona Louise regale an audience of young children and their parents.

Out of time: F Scott Fitzgerald and an America in decline

F Scott Fitzgerald’s publishing career lasted just two decades, from 1920 to 1940, when he died aged 44. But in that brief time he published four novels, a play and 178 short stories (some of which he compiled into four collections), while leaving an unfinished novel as well as many incomplete stories, fragments, notes, screenplays and film scenarios. Most have gradually trickled into print over the 77 years since his death, and with the publication of I’d Die For You, the trickle all but ends: these are the last known uncollected stories from the archives.

From Out of time: F Scott Fitzgerald and an America in decline
Topic:
Authors

Submitted by birdie on May 17, 2017 - 9:00pm
From Black Press USA (but few other sources) comes news that limits the responsibilities and the tenure of the Librarian of Congress Dr. Carla Hayden.

The previous Librarian of Congress, James Billington, served in the position for 28 years though he was a Russian scholar and not really am MLS.

How real books have trumped ebooks

But after reaching a peak in 2014, sales of e-readers and ebooks have slowed and hardback sales have surged. The latest figures from the Publishing Association showed ebook sales falling 17% in 2016, with an 8% rise in their physical counterparts. At the same time, publishers’ production values have soared and bookshops have begun to fill up with books with covers of jewel-like beauty, often with gorgeously textured pages. As the great American cover designer Peter Mendelsund put it to me, books have “more cloth, more foil, more embossing, page staining, sewn bindings, deckled edges”.

From How real books have trumped ebooks | Books | The Guardian
Topic:
Books

A report set to be released by the three city library systems Monday highlights some of the worst conditions at branches across the boroughs and expresses hope the city will provide some relief. The 15-page report, “Time to Renew,” says despite a $300 million capital infusion from the recent budget, several branches in the New York, Brooklyn and Queens public library systems are still suffering severe infrastructure problems.

The Collector’s Fallacy: Why We Gather Things (like books) We Don’t Need

Buying books does not equal reading books. We all know that. Yet, so many end up victims of tsundoku anyway. Why? One problem, I think, is that collecting feels like learning. Each time we discover a new productivity toy, internet article or bestselling book, our brain sends us a jolt of dopamine (our brain’s “reward” hormone) for doing nothing at all. Ahh, says our brain, a job well done.

From The Collector’s Fallacy: Why We Gather Things We Don’t Need
Topic:
Libraries

As anyone who’s read Stein’s books knows, her approach encourages her subjects to air their grievances; as people opened up to her, they revealed stories of turbulence and violence, plus the tensions of classism, sexism, racism, and ageism. McNeil and McCain, who are currently working on an oral history of 1969, have noticed this in their interviews, too, and it may be Stein’s most remarkable legacy: the creation of a form that championed a mosaiclike reality, where every person’s account carries an equal weight as “truth.” Her “oral narrative” carves out a place where history is illuminated by people who had a hand in shaping it, yet had never been so much asked for their opinions, and are held up as sacred as the deeds that line history textbooks. “You can really document injustice and the way things went down so well,” McNeil notes. “I think Jean Stein deserves a medal for that.”

From How Jean Stein Reinvented the Oral History
Topic:
Authors

Everyone knows knowledge is a vital aspect when it comes to moving forward. By looking at popular literature in a time period you can delve into the people of the time’s though process. Let’s get into the 3 best selling books from each decade starting at 1950-1959 and going to where we are now 2010 onward. If the books are available on Amazon links will be provided for those interested in reading them.