This morning, I was reading another article on Mashable when I saw this link to a story about the Old Spice marketing people making custom videos to answer fans. With a little help from the Twitterverse, people were tweeting and retweeting about getting the Old Spice guy to say a few words for libraries. Within two hours of my first tweet (and apparently while I was eating lunch), there came a reply with the video linked below.

For lack of a better phrase, there was a plethora of celebratory posts on Twitter.

It’s been fun to watch it bounce from account to account as people pass it along to their friends and followers. It’s been fun to observe how message move through the medium; how parts of a tweet will morph and change over time as the message moves further and further away from the originals. Structure, inclusion or exclusion of user names, and links will appear, move, or disappear from the body of the tweet. (Aside: this is a source of data that linguistic experts could study at the Library of Congress Twitter archive.) It’s really interesting to see how news of this nature evolves on a real time line.

I’ll be honest, I was grinning so hard that I had to take a moment to just let digest that there was a reply. It’s one of the strengths of the marketing campaign: providing a funny, timely response to various inquiries. Pete Bromberg sent me this link to how the Old Spice marketing team is doing all of these videos. It’s a ‘must read’ for those interested in this campaign since lays out how they find people to answer, shoot the spots, and then get them online under a very short timeline. It’s a lesson on hands off management and on the power of social media to get a group of people talking about your product.

I will say that I am finding some of the reactions to this video very odd. These are paraphrased from different sources.

I think people are reading far too much into the YouTube video. It’s a humorous spot about why libraries are great contributors to society. This was never intended to sway any politician, bureaucrat, or decision maker; but its lack of ambition does not make it without value. Enjoy it for its hilarious appeal.

The caring or lack of caring for libraries is beside the point: there is no such thing as bad publicity. Especially when, out of hundred of thousands of questions and statements looking for a video response, a wildly popular viral video marketing campaign has chosen to focus one video out of only a hundred or so shot in a day on libraries without touching on stereotypes, cheap humor, or other negatives. How exactly does this hurt the image of libraries or librarians? You have people who wouldn’t ordinarily think about the library moving from video to video and seeing what they said in response to different people. Simply put, there aren’t any tangible negatives.

In terms of the common lament for being framed as “just books”, I think that’s just a perception that is slowly dying. While the spot doesn’t mention the other offerings of libraries (e.g. internet access, audio and e-books, Hollywood and informational movies, to name a few), it portrays it as a place where ideas are exchanged through words. If anything, it’s a positive support for how the library encourages and cultivates the expression of ideas. For a thirty second spot, that’s not bad.

At any rate, the video managed to snag over eight thousand views and some YouTube honors. Not a bad thing at all, if I might say. It certainly got passed around library blogosphere, perhaps due to a posting on LISNews and making the front section of the Huffington Post Book Section (as pictured below). 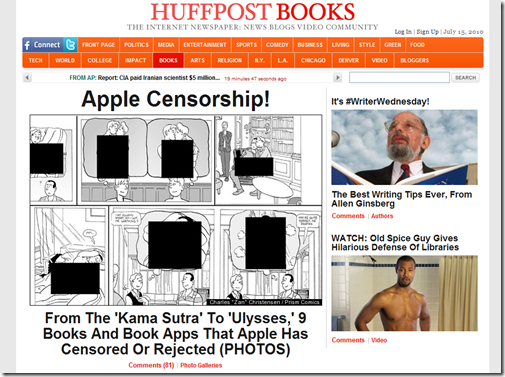 I’ll be interested to see what the Old Spice guys will think of next. I think the biggest takeaway that this campaign embodies is that you can throw yourself out to your community and let them lead the way. Here, one advertiser said, “Hey, toss us a question and we may send you are reply.” Five million views in the course of the day later, they have a series of videos that people are talking about, sharing, and (more importantly) enjoying. There isn’t a rush or need created for people to run out and buy these products; it is the creation of goodwill and a memorable experience that will bring people back, even if the product doesn’t apply to them. No one in the library runs around yelling at people, “Are you going to borrow that or what?” or “You should be checking your email right here and right now.” It’s the creation of a friendly environment, helpful staff, the right tools and materials to meet immediate information needs, and the ability to gather resources and information for deeper or more focuses inquiries that bring people back. This is our advantage over bookstores and the internet; we aren’t interested in making someone buy anything and we can offer the human help that the web browser cannot. This is what differentiates us and creates a niche that the library institution uniquely fills.

I hope people take this video as a fun little tweak at libraries. Let’s embrace this portrayal and run with it, for it really is a humorous gift. I know for the next week or so I’ll be grinning when I say to my wife and friends.

(As for the product itself, I have used Old Spice before these ads came out and I’ll use it again in the future. For me, the cologne reminds me of my grandfather; he used to wear it and it’s one of the strongest sensory memories of him that I have. I started to wear it after he passed away because it was comforting. My reasons for using Old Spice go a long way beyond social media, marketing people, and the viral videos that have been produced. I connect with the brand and the product at a deeper, more sentimental level. There is no ad campaign in the world that can replicate that. –Andy)