A pipe burst in the Times’s morgue which occupies the sub-subbasement of the former New York Herald Tribune building on 41st Street. Morgue manager Jeff Roth is quoted as saying "this was the stuff of nightmares. It’s always been a worry."

Roth stated that most likely 90% of the photos could be salvageable. But it raised the question of how in the digital age — and in the prohibitive Midtown Manhattan real estate market — can some of the company’s most precious physical assets and intellectual property be safely and reasonably stored? 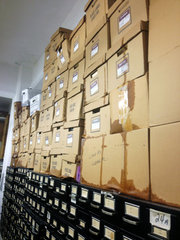