I'm currently reading "iWoz: Computer Geek to Cult Icon". It is a lively and fascinating read, and plenty of Steve Wozniak's comments are worth repeating, but this one about the that he and the other Steve:) spent at the Stanford Linear Accelerator Center (SLAC) Library is superb, especially to a hang-out at libraries geek such as myself. Reminds me of spending some time at Mizzou's Engineering Library. :)

The 5 Elements of Effective Thinking presents practical, lively, and inspiring ways for you to become more successful through better thinking. The idea is simple: You can learn how to think far better by adopting specific strategies. Brilliant people aren't a special breed--they just use their minds differently. By using the straightforward and thought-provoking techniques in The 5 Elements of Effective Thinking, you will regularly find imaginative solutions to difficult challenges, and you will discover new ways of looking at your world and yourself--revealing previously hidden opportunities.

A Guide to the Good Life

A Guide to the Good Life: The Ancient Art of Stoic Joy 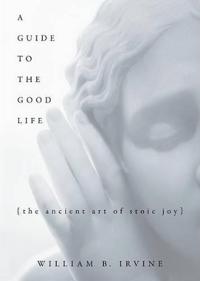 One of the great fears many of us face is that despite all our effort and striving, we will discover at the end that we have wasted our life. In A Guide to the Good Life, William B. Irvine plumbs the wisdom of Stoic philosophy, one of the most popular and successful schools of thought in ancient Rome, and shows how its insight and advice are still remarkably applicable to modern lives.

In A Guide to the Good Life, Irvine offers a refreshing presentation of Stoicism, showing how this ancient philosophy can still direct us toward a better life. Using the psychological insights and the practical techniques of the Stoics, Irvine offers a roadmap for anyone seeking to avoid the feelings of chronic dissatisfaction that plague so many of us. Irvine looks at various Stoic techniques for attaining tranquility and shows how to put these techniques to work in our own life. As he does so, he describes his own experiences practicing Stoicism and offers valuable first-hand advice for anyone wishing to live better by following in the footsteps of these ancient philosophers. Readers learn how to minimize worry, how to let go of the past and focus our efforts on the things we can control, and how to deal with insults, grief, old age, and the distracting temptations of fame and fortune. We learn from Marcus Aurelius the importance of prizing only things of true value, and from Epictetus we learn how to be more content with what we have.

Some five star reviews on Amazon are worth more than others.

In Search of Paradise

In Search of Paradise: Middle-Class Living in a Chinese Metropolis

A new revolution in homeownership and living has been sweeping the booming cities of China. This time the main actors on the social stage are not peasants, migrants, or working-class proletariats but middle-class professionals and entrepreneurs in search of a private paradise in a society now dominated by consumerism. No longer seeking happiness and fulfillment through collective sacrifice and socialist ideals, they hope to find material comfort and social distinction in newly constructed gated communities. This quest for the good life is profoundly transforming the physical and social landscapes of urban China.

Li Zhang, who is from Kunming, the capital of Yunnan province, turns a keen ethnographic eye on her hometown. She combines her analysis of larger political and social issues with fine-grained details about the profound spatial, cultural, and political effects of the shift in the way Chinese urban residents live their lives and think about themselves. In Search of Paradise is a deeply informed account of how the rise of private homeownership is reconfiguring urban space, class subjects, gender selfhood, and ways of life in the reform era.

The Blue Tattoo: The Life of Olive Oatman (Women in the West)

For seven years, Paul Lockhart’s A Mathematician’s Lament enjoyed a samizdat-style popularity in the mathematics underground, before demand prompted its 2009 publication to even wider applause and debate. An impassioned critique of K–12 mathematics education, it outlined how we shortchange students by introducing them to math the wrong way. Here Lockhart offers the positive side of the math education story by showing us how math should be done. Measurement offers a permanent solution to math phobia by introducing us to mathematics as an artful way of thinking and living.

In conversational prose that conveys his passion for the subject, Lockhart makes mathematics accessible without oversimplifying. He makes no more attempt to hide the challenge of mathematics than he does to shield us from its beautiful intensity. Favoring plain English and pictures over jargon and formulas, he succeeds in making complex ideas about the mathematics of shape and motion intuitive and graspable. His elegant discussion of mathematical reasoning and themes in classical geometry offers proof of his conviction that mathematics illuminates art as much as science.

The Missile Next Door

The Missile Next Door: The Minuteman in the American Heartland

A friend of mine is an artist and designer who created a children's book character, "Coach Gator the Motivator," to teach children good habits. A coloring book is already available for sale, but he is looking for financial assistance in getting other projects for this character off the ground. This is a guy who loves kids and is an excellent artist, so please consider donating to this campaign.

Why did Wal-Mart really decide to stop selling the Kindle?

This book cannot be read on a Kindle

E-Readers and the Public School Problem

Reading With Kids: Some stats to ponder …

Dave Eggers' wish: Once Upon a School

Submitted by Bibliofuture on September 11, 2012 - 10:23pm
Accepting his 2008 TED Prize, author Dave Eggers asks the TED community to personally, creatively engage with local public schools. With spellbinding eagerness, he talks about how his 826 Valencia tutoring center inspired others around the world to open. http://www.ted.com/talks/dave_eggers_makes_his_ted_prize_wish_once_upon_a_school.html Libraries might not be able to duplicate what Eggers has done but I think there are seeds of ideas that could be used from what Eggers has done.

The October 2012 issue of Cites & Insights (12:9) is now available for downloading at http://citesandinsights.info/civ12i9.pdf

The issue is 24 pages long. A single-column 6x9" version, designed for online reading (and optimized for online display rather than printing), 46 pages long, is at http://citesandinsights.info/civ12i9on.pdf (It's a much smaller file than the two-column version, if that's an issue.)

The issue contains the following essays, available as HTML separates through the links below (if you're viewing a web page) or from http://citesandinsights.info:

Information on my new book, designed to be a tool for public libraries aiming to improve or retain funding, including its availability as an $11.99 PDF, $21.95 paperback or $31.50 hardcover. While it's a tool, it's also an interesting set of detailed tables on the activities of public libraries--if you're numerate, since the tables deliberately lack textual commentary.

Lovers of Proust, get out your headphones: Naxos AudioBooks, a British division of the classical music label, has recorded all seven volumes of “Remembrance of Things Past” on CD — 120 discs, which will take 153 hours to get through. The last one comes out on Oct. 29.

Nicolas Soames, the publisher, said in an interview that the new version replaces an earlier, abridged edition — just 36 CDs — that the company recorded between 1996 and 2000. He believes the 120-disc edition (also available for download), which will cost £380 (about $600), to be the longest audiobook in existence.

Konrath and Crouch on Libraries

Konrath and Crouch on Libraries
http://www.teleread.com/drm/konrath-and-crouch-on-libraries/

Leading up to the probable announcement next week of a new Kindle Fire and Kindle e-reader, Amazon is teasing us with some never before released information about their products and services. The company, who says their Kindle Fire tablet is sold out, claims their small tab is responsible for 22% of U.S. tablet sales. This translates to an estimated 6.1 million devices flying off of the shelves since it's debut last November.

"The Story" on APM had this piece:

Ken Perenyi paints like Rembrandt - and Modigliani and Picasso. He can forge a brush stroke better than most, and for a time he actually sold his works as originals in the big auction houses. He had a close call with the F.B.I., and now he makes pieces that are labeled as copies. He calls himself a "master forger," and he tells his story in his book Caveat Emptor: The Secret Life of an American Art Forger.

We are nearing the election and some news stories and books may be appearing that are relevant for LISNEWS posts. I wanted to give some background on my thought process in regards to political posts.

I have zero interest in endorsing any candidate in this forum.

My posting a story that has a political topic, theme is not an endorsement of the specific article. If I am not endorsing the article why I am posting it would be a valid question. My answer would be that there are many articles and books that are good to be aware of whether you agree with their content or not. I would expect this to be a view held by many librarians but I have been surprised how often this is not the case. Too many times I have received a response to an article that assumes my motive in posting a story is me saying - "You must believe what is in this article" as compared to what I was trying to do was make people aware of an article.