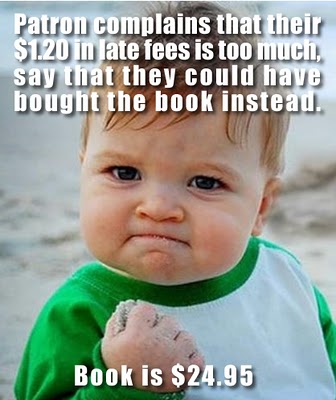 Guess which item of the aforementioned list I would be more than glad to hand out to every patron who asks for it?

It is so annoying during science fair season, when the library is swarmed by students who only bring blank poster-boards with them and expect to walk out with a finalized project. They will usually draw straws to determine which sucker has to sheepishly walk up to the Circ desk and ask for every single supply needed. It is not only reserved to young students, I have encountered many older patrons who were upset that I would not give them any paper for their book/movie/play/manifesto/complaint which they are currently working on.

It seems like every tax paying citizen feels like it is their given right to use the library as if it was some rogue Staples that just gives ish away. I'm sure with your tax returns, and a calculator we can figure out exactly how much you "contributed" to the library. Here's a clue to save you some long division, it probably is not much more than $50. Sure that sounds reasonable enough for you to pillage the supply closet a time or two, but that money also goes towards the collection which includes countless copies of classic American literature aka the Harlequin series (yes, I do enjoy taking as many jabs at "romance novels" as possible).

So in actuality, the amount of your taxes spent on supplies is extremely low. I'll do you all a favor and break it down in a simple list.

Each patron's taxes affords them to:
- 25 scissor swipes

The Library: We Ruin Your Mother's Day.

We were fully staffed yesterday, the first time in months. Even though half of the staff is new, its better than nothing and its great to blame things on the "new guy" [new GAL(s)].

It being Mother's Day also relieved the patron rush, still had a 1000+ door count though.

Only one "bad" patron interaction out of a hundred or so, not too bad.

Passive Aggressive Librarians with Printers on the Rampage

The secret's out. There is another stereotype for librarians out right now, passive aggressiveness.

To celebrate National Library week, Buzzfeed collected 20 Passive Aggressive Library Signs. If I knew they were looking for contributions, I could have added another 20 to that.

Last week it was the patron who came in well beyond the point of intoxication. We had to call the cops and later an ambulance to get rid of him and his alcoholic vapor breath.

What's the Deal with Librarians...

In my best Jerry Seinfeld impression: "What's the deal with librarians and their holiday themed sweaters?" I swear, it seems that at every branch I have been to, it seems like it's a requirement to have a closet full of festive sweaters for the whole year.
Are they the "in gifts" to give to that newly graduated MLS student?? If that's the case so be it, I wear a size S or M, and don't forget the gift receipt!

Yesterday was incredibly busy. There was a children's program in the morning and it was raining book returns from the sky. The door count just eked over the 1500 threshold.

But it was a good Saturday because certain managers were not working which can just make your day. 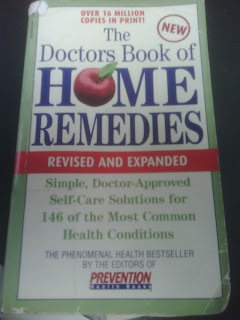 This will be my 3rd week into my first semester for my MLIS.

Here are some of my preconceived notions before the semester started:

"There is No Such thing as Patron - Circ Desk Confidentiality."

I don't know what it is about the circ desk, but it seems like patrons seem to frequently throw the general sense of self disclosure out the window. It's quite similar to someone telling their whole life story to a bartender at the bar.

Tonight I was part of one of the most awkward discussions I have had at the circ desk.

A mother came up to me at the circ desk and told me that her two children had been out of the country for the past year and that they needed new cards. Sure thing, easy transaction.
When I was looking up her children's accounts by searching with her last name, she saw the PC screen and said to her children, "Wow there are a lot of people with our last name, I mean, my ex-husband's last name." Her son looked up at her and asked, "You and dad got a divorce???" She quickly changed the subject by having him sign his name on his new card. I tried not to react at all, but I may have winced when he asked.

Your Books are Due back on Hallmark Day.

Work yesterday was rough, I don't know what brought all the patrons out but they came out in droves. I didn't have any time to check the Jets/Colts game on my phone at all, but I digress.

'The Librarians' US version

The US definitely needs to import the Australian TV series 'The Librarians' here.

It worked for 'The Office.'

I made this picture for one of my MLIS class presentations, we'll see how it goes this Tuesday night.

Book Recall
Well now I've seen it all. There's a recall on SEVERAL DIY (do it yourself) books. (reminds me of 'The 40 Year Old Virgin' Steve Carell-"Do you like to do it yourself?")

You Know You Work in a Library when... 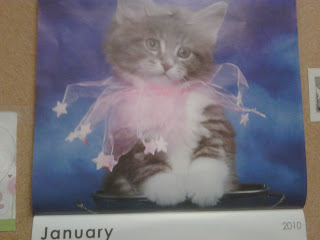 What's the deal with librarians and cats?

You know you work at a library when your coworkers gather into a group and go "awww" over the latest kitten calendar for over 5 minutes. 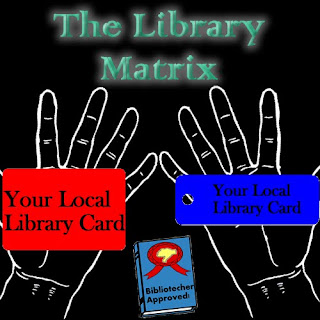 When a patron signs up for a new card or needs a replacement, I always ask them, "wallet sized or keychain sized card?"

I try not to speak so quickly, but the patron just stares at me quizzically. It is at this point that I pull out each card and hold one in each hand and ask the patron again. I feel like I'm Morpheus asking Neo, whether or not he wants the story to end or stay in Wonderland.

Is it just me, or is this a fairly easy question to answer in under 10 seconds, I could hum the Final Jeopardy theme song and they still couldn't make a choice. But alas, not all patrons are the same, when it comes to this decision you can pretty much categorize them: Straight Forward, Bank Robber, Shoot First-Ask Questions Later, and the Flip-Flopper.

The Straight Forward patron is the easiest to handle, they will give you their answer right then and there, crisis avoided.

I label the second type the Bank Robber, because much like someone at the teller line, they don't care just as long as you hand it over. These are the type that are in a hurry to get in, get their card, and jump on the public computers to update their Facebook status or Tweet to the whole world that they got their first library card.

"I Can Name That Patron in Two Adjectives"

My PICAW (Partner In Crime At Work) and myself found ourselves bored at work when we were covering the phones.
I randomly searched for unique names in our patron database and was quite surprised what names (first and middle) popped up. So what started out as a way to pass the time turned into a competitive game.

Our list became quite extensive and we have tried to keep it organized, somewhat...

We found out that our library system has its own "United Nations" of patrons' names when it came to countries along with some other cities.

"Do Not Look a Gift Horse in the Mouth"

I had a gentleman approach me at the desk yesterday asking if there was a manager on duty. I've learned from past experience that my lack of authority > manager's ineptitude.
So I told him that I could look in the back for one to which he replied, "Well, maybe you can help me." 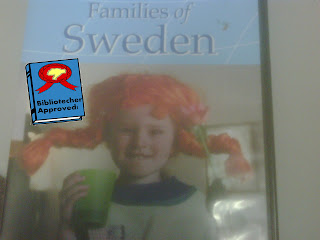 If it was not for them we would not have meatballs, easy to assemble furniture, and apparently to this children's series cover: square beef patties from Wendy's.