The vote comes after President Trump in May doubled down on his call to eliminate IMLS and virtually all federal funding for libraries, as well as a host of other vital agencies, including the National Endowments for the Arts and the Humanities.

ALA president Jim Neal called the subcommittee vote “one important step in the lengthy congressional appropriations process,” but a development that nevertheless shows that “elected officials are listening to us and recognize libraries’ importance in the communities they represent.”

Ivanka Trump Gets Schooled by Librarians

When the first daughter tweeted about applauding librarians last week, she was not met with much praise. As we know, her father has slashed library budgets wherever he could (and doesn't seem to want to read any books).

Ivanka: This #NationalLibraryWeek, we honor our libraries and librarians for opening our eyes to the world of knowledge, learning and reading!

One of hundreds of responses: 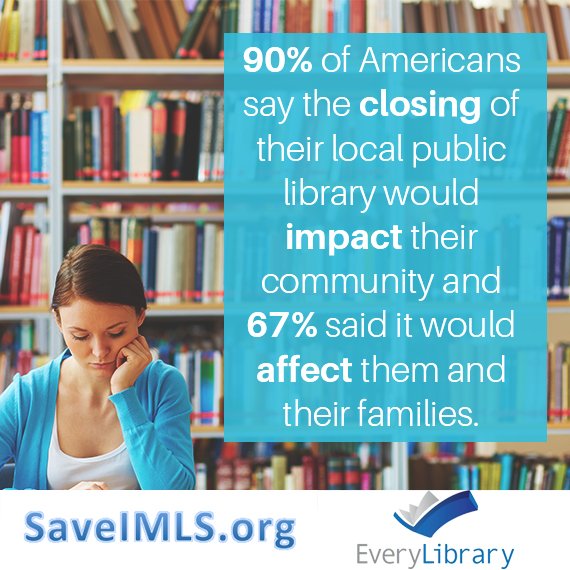 "Defunding libraries as proposed in your dad's budget hurts hardworking Americans," the nonprofit EveryLibrary tweeted back at Trump, before adding, "Cuts to federal funding for libraries are absolutely unconscionable, cruel, and unnecessary. #saveIMLS #library."

There's a New Congress in Town

If you want to keep current with what legislation each house is considering, don't forget the wonderful resource, the Library of Congress which will report what is taking place sans spin (unlike Breitbard, Fox, National Review, etc.).

For assistance with your research from a Law Library of Congress reference specialist, ask a Law Librarian.

When you think of Charles and David Koch and their dreams of remaking America into a libertarian paradise, you generally associate them with campaigns to elect rightwing candidates.

And now they’re going after public libraries, because if people want access to books and videos and computers and children’s story hours and public meeting spaces, they should damn well pay for them themselves, not leech taxpayer dollars for the “good” of the “community.”

Donald Trump walks into your local library. What next? Librarians speak out

Reassuringly professional on the whole Not all the answers fit—my favorite outside-the-rules response to the hypothetical patrons was, “Webster’s Dictionary. Dropped from a great height”—and I would have welcomed more mention of ebooks and audiobooks. Still, most of the answers were reassuringly professional in the opinion of this nonlibrarian. My favorite was from D.W., a retired librarian and prolific commenter within the LinkedIn group:

From Donald Trump walks into your local library. What next? Librarians speak out
Topic:
Politics

“The Library of Congress’s decision is blatant capitulation to political correctness — replacing the correct term ‘illegal alien’ with terms that are both factually and legally incorrect,” the letter, obtained by TheBlaze, read. “Simply, it is inappropriate for the Library of Congress to unilaterally replace accurate, legal terms with inaccurate, generalized terms in the name of political correctness,” the letter continued.

From Exclusive: New Bill Will Require Library of Congress to Continue Use of ‘Illegal Alien’ in Subject Headings | TheBlaze.com
Topic:
Politics

The Koch Brothers have finally launched their attack on libraries.

On Thursday, the Koch Brother's super PAC "Americans for Prosperity" started robocalls against the Plainfield IL library referendum. They have targeted the library for defeat as part of their anti-tax agenda. "Americans for Prosperity" is good at quoting facts that don't exist and slinging mud at the common good. We need your help to answer this Koch funded anti-library smear campaign now, and your help in future to build a defense against their anti-library agenda.

moking outside of public libraries in New York may soon be banned.

State lawmakers have introduced a bill to add libraries to the restriction put in place in 2012 that prohibits smoking within 100 feet of school entrances or exits.

“Today, I am proud to extend that smoke-free protection even further to include the entrances and exits of our state’s libraries,” said Assemblyman Jeffrey Dinowitz, D-Bronx, in a statement. He's sponsoring the bill with Sen. Gustavo Rivera, D-Bronx.

More than 50 major players in the U.S. publishing industry are petitioning the White House and Congress to end the Cuba trade embargo as it pertains to books and educational materials.

This trade-off isn’t new. In the mid-1990s, cryptographers argued that escrowing encryption keys with central authorities would weaken security. In 2011, cybersecurity researcher Susan Landau published her excellent book Surveillance or Security?, which deftly parsed the details of this trade-off and concluded that security is far more important. Ubiquitous encryption protects us much more from bulk surveillance than from targeted surveillance. For a variety of technical reasons, computer security is extraordinarily weak.

If a sufficiently skilled, funded, and motivated attacker wants in to your computer, they’re in. If they’re not, it’s because you’re not high enough on their priority list to bother with. Widespread encryption forces the listener – whether a foreign government, criminal, or terrorist – to target. And this hurts repressive governments much more than it hurts terrorists and criminals.

FULLY IMPLEMENT ESSA SCHOOL LIBRARY PROVISIONS
School librarians are on the front lines of librarianship. For many young minds they are the first contact with both librarians and libraries and provide the kinds of opportunities for imaginative exploration that libraries freely and democratically provide through their books, programs, and services. Children are allowed to explore literature and new ideas freely in school libraries while also developing a love of reading and strong skills in literacy that will help them throughout their life.

The ability of a library board to act free of political influence is imperative in maintaining the local public library as a trusted community institution, one that provides information without discrimination. Libraries and their independent boards work diligently to protect the rights of confidentiality, privacy and the freedom to read.

Fourteen million fewer books are available in British public libraries today than when David Cameron became Prime Minister in 2010, official statistics have revealed.
Funding cuts and library closures mean that around one in every seven books available on library shelves six years ago have now gone.
Campaigners said Tory ministers had taken an “abysmal and appalling” approach to Britain’s libraries and demanded they act to stop councils closing any more.
The statistics from Chartered Institute of Public Finance and Accountancy (CIPFA) reveal the depth of library cuts implemented since the Tories entered office.

The provision in question is Item 3, Section 57, which states: “A public body, or a person acting for a public body, shall not, during the period 60 days before an election in which a local ballot question appears on a ballot, use public funds or resources for a communication by means of radio, television, mass mailing, or prerecorded telephone message if that communication references a local ballot question and is targeted to the relevant electorate where the local ballot question appears on the ballot.” In addition, public employees violating this ruling could be fined anywhere from $1,000 to $20,000 and could be imprisoned.

From Libraries gagged by new election law ask for relief

Descriptive metadata is never neutral. It reflects our understanding of our society, and our interpretation of how we think the world should be. It is unavoidably evocative of not just a book, film, or song, but rather the whole society which gave it genesis. When developed, particularly Western, countries wind up determining codes and classifications, a very specific illustration of the world is drawn which is a slim sliver of human understanding of the world.

From Metadata that kills — Medium

Scholarship, Security and ‘Spillage’ on Campus

The irony is that the Dawn or Doom colloquium was Daniels’s own personal project. Two of the organizers told me he is fascinated by the contradictory responses — from celebration to alarm — that tend to accompany big technological advances. He proposed to convene Purdue faculty members and leading national experts to explore the risks and promises of artificial intelligence, robotics, and Big Data surveillance, among other developments.
In his own view, Dawn or Doom is not a hard question. Daniels and I chatted about that theme as we stood in the wings off stage, shortly before my talk.
“The answer always turns out to be, it’s dawn,” he said.

From Scholarship, Security and ‘Spillage’ on Campus — Medium

‘Thanks Obama - that was my idea’

A Cwmgwili library manager has offered his tongue-in-cheek thanks to Barack Obama after the US President appeared to steal his idea.

Steve Jeacock, Labour’s Carmarthen East and Dinefwr candidate for next year’s Assembly elections, instigated a scheme in Killay to ensure every primary school child in the area was made a member of the library.

The scheme won the Gold Award at the Welsh Libraries Marketing Awards and was adopted by the Welsh Government as a pilot project two years ago under the title, Every Child a Library Member.

From ‘Thanks Obama – that was my idea’ (From South Wales Guardian)

The Political Librarian - Vol I Issue 1

Announcing Volume I, Issue 1 of The Political Librarian, our new journal at the intersection local libraries, public policy and tax policy.

We are interested in featuring new voices and lines of inquiry, and are interested in publishing opinion pieces, white papers, and peer reviewed works.  You are invited to contribute to Vol 2 Issue 1 for a March 2016 publication date.  Our editorial guidelines are posted for your review and consideration.

Thanks to our editorial team, including series editor Lindsay Sarin, and general editors Johnna Purcell and Rachel Korman.  We are proud to announce our editorial board

From The Political Librarian - Vol I Issue 1 | EveryLibrary