NPR reports that New York Public Library has calculated its most circulated books of all time (so far). Only one non-fiction book made the top ten.

Need a wolf fur? A puffin pelt? All you need is a library card...

Submitted by stevejzoo on October 6, 2015 - 2:29pm
Topic:
Circulation
"and a visit to the ARLIS library For years, an Anchorage library has been loaning out skulls, furs and mounted animals to the public -- free of charge." Alaska Dispatch News Octobe 5, 2015, front page and continuation. http://www.adn.com/article/20150925/need-wolf-fur-puffin-pelt-all-you-need-library-card-and-visit-arlis-library

Weird Stuff You Can Check Out @ Your Library

From NPR (doesn't that make me sound like Carl Kasell): weird stuff that can be borrowed from different public libraries.

Items include fishing poles, snow shoes, garden seeds, pictures for your walls and bridal magazines. Anyone out there in LISNews-land lend other non-book items? If so, please comment below.

Do you ever feel sentimental about weeded books? Then this one's for you. (The NYT recommends that you view it full screen).

While books may not necessarily make for a better reading experience (ed. but it's ok to have a preference one way or the other), they are superior as subject matter for a photo project. (I defy you, dear reader, to find a loving portrait of a Nook.) 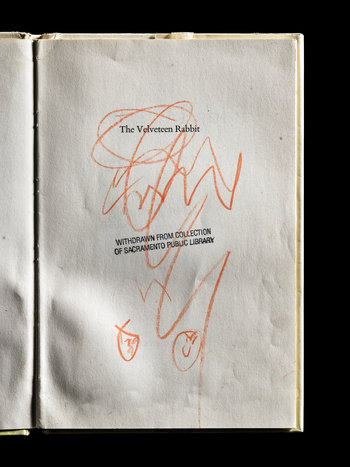 To wit, witness Kerry Mansfield’s “Expired,” a twenty-page photo series whose substance is the physicality of discarded and withdrawn library books. She brings the lens in close, showing worn edges and torn covers and photographing the ephemera of the library experience: the check-out cards and the paper pockets they went into

New Use for An Old Friend, the Date Stamp

From Colossal: I can’t remember the last time I saw the actual use of a rubber date stamp, most libraries exchanged them for fancy barcodes and other digital systems a decade ago.

But Italian artist Federico Pietrella who lives and works in Berlin has a fantastic use for them in his paintings made from thousands of densely stamped ink dates. In his enormous ink artworks Pietrella always stamps the current date, thus each of his pieces contains a clear timeline of the days he worked on it, often spanning two months. You can see much more on his website and watch a brief interview with artist courtesy of Deutsche Welle. (via visual news)

Elvis Has Left The Building

...the Humes High School Library in Memphis, that is... with his library book, "The Courageous Heart: A Life of Andrew Jackson For Young Readers". The circ card with 13-year old Elvis Presley's signature is going for more than $3,500 when it goes on sale on August 14.

In Spokane, WA a group of civic and literary minded folks are planning a fundraiser to pay off the fines and fees on children's library cards so they can use them again. The local libraries block cards from use if they carry a balance of $10 or more. By paying off these fines, the group raises money for the library and opens up blocked cards so kids can once again borrow books.

Does Harvard Tell Yale? Last of the Ivies to Join Borrow Direct

From Yale: If the roughly 12.5 million volumes in Yale's libraries weren't enough for Yale students, they will now have access to 17 million more thanks to the Harvard Library. The decision comes nearly 10 years after the rest of the Ivy League began participating in the interlibrary sharing system Borrow Direct.

Harvard is the last Ivy League college to take part in the program, which allows students and staff to request volumes from other schools' libraries. There are more than 45 million volumes currently in the system.

Some, like professor of German art and culture Jeffrey F. Hamburger '79 GRD '87, who chaired a Harvard Faculty of Arts and Sciences library advisory committee, told the Crimson that the university had concerns its library would be a net lender rather than a borrower.

"That said, there are areas in which other libraries have stronger collections than we do, and I think time will tell whether it’s the right decision," he added.

Kindles Will Circulate at Concord Library

Wicked Local reports: The Concord Free Public Library has started to circulate five Kindle e-book readers. Each Kindle circulates for a two-week period and comes loaded with several regional travel guides and approximately 50 popular titles including “Freedom: a Novel” by Jonathan Franzen, “Moonlight Mile”by Dennis Lehane, “Tinkers” by Paul Harding, “At Home: A Short History of Private Life” by Bill Bryson, and “Grand Design” by Stephen Hawking. Also included are such local favorites as “Little Women” by Louisa May Alcott, “Walden and Other Writings” by Henry David Thoreau, and “Wicked: Life and Times of the Wicked Witch of the West” by Gregory Maguire.

Pick Up a Book or DVD With Those Groceries

Republican-American LITCHFIELD — Residents of Bantam CT no longer have to visit Oliver Wolcott Library to grab a book, an audio book, or a DVD. Now they can do it at Bantam's Big Value Supermarket.

The library, using two grants totaling $36,500, has installed a vending machine anyone with a library card can use to check out materials. Known as the OWL Box, it's the first machine of its kind in the state, according to Oliver Wolcott Library's director, Anne Marie White. See comment below for information about the Brodart vending machine.

"We wanted to reach out to the people in Bantam and others in that area who can't always get to the center of town," White said. "Providing greater access to our materials is a goal, and we thought Big Value would be an ideal place to do it." From the library in Litchfield to the store in Bantam is about 3.5 miles.

The Library: We Ruin Your Mother's Day.

We were fully staffed yesterday, the first time in months. Even though half of the staff is new, its better than nothing and its great to blame things on the "new guy" [new GAL(s)].

It being Mother's Day also relieved the patron rush, still had a 1000+ door count though.

Only one "bad" patron interaction out of a hundred or so, not too bad.

That Mighty Sorting Machine is One for the Books

Story from the NYTimes about a $2.3 million dollar sorting machine that does the work that nobody wanted to do previously...sorting books to send from one branch to another.

Salvatore Magaddino, who oversees the library system’s distribution of materials did not know that such a machine existed until a colleague pointed out one that was featured in a YouTube video.

Article features photos and a video of the machine at work.

For Library Week, A Blind Date With A Book

Fun! To celebrate National Library Week this week, the West Caldwell NJPublic Library, 30 Clinton Road, will are invited to have a blind date with a book (no long term commitment necessary).

Just choose a wrapped book from the special display area, take it home and read it. You won’t know what the book is until you unwrap it! This book is the Library’s National Library Week gift to you.

After reading the book, write a brief review of it using the review form you will find with the book. Submit your completed book review by Friday, May 21 and you will be automatically entered in a drawing to win an iPod Shuffle.

What’s happening?
The number of items that a customer may reserve will be reduced from the current limit of 10 to 5.

Why?
Over the last year, the amount of holds transferred between branch libraries has jumped by nearly 50%. While the success and popularity of this service is appreciated by the Austin Public Library, this increase in workload has not been matched by an increase in staff or vehicles, resulting in a negative impact on the services we offer. Branch staff is unable to process all of the items requested in a timely fashion, resulting in a backlog of and extended wait times for requested items.

"There is No Such thing as Patron - Circ Desk Confidentiality."

I don't know what it is about the circ desk, but it seems like patrons seem to frequently throw the general sense of self disclosure out the window. It's quite similar to someone telling their whole life story to a bartender at the bar.

Tonight I was part of one of the most awkward discussions I have had at the circ desk.

A mother came up to me at the circ desk and told me that her two children had been out of the country for the past year and that they needed new cards. Sure thing, easy transaction.
When I was looking up her children's accounts by searching with her last name, she saw the PC screen and said to her children, "Wow there are a lot of people with our last name, I mean, my ex-husband's last name." Her son looked up at her and asked, "You and dad got a divorce???" She quickly changed the subject by having him sign his name on his new card. I tried not to react at all, but I may have winced when he asked.

Book Recall
Well now I've seen it all. There's a recall on SEVERAL DIY (do it yourself) books. (reminds me of 'The 40 Year Old Virgin' Steve Carell-"Do you like to do it yourself?")

"Do Not Look a Gift Horse in the Mouth"

I had a gentleman approach me at the desk yesterday asking if there was a manager on duty. I've learned from past experience that my lack of authority > manager's ineptitude.
So I told him that I could look in the back for one to which he replied, "Well, maybe you can help me."