How the Disabled Benefit from Libraries

All across America, public libraries are either closing or having their funding reduced to such a level that their futures remain uncertain. The effect these closings will have on the wider public remains unclear, though it’s guaranteed not to be good.

And for the disabled people who depend on libraries to provide a slice of normality in a life that already faces enough uphill battles, where will they turn?

From How the Disabled Benefit from Libraries | Reading, Writing, Research

The rules include no men or minors on camera for any reason and no "actions that may be deemed obscene in your community," according to the website.

NASHVILLE, Tenn. (AP) -- Jeffery Bailey spends nearly every day at his public library. It's not just that he loves books. For the 43-year-old who sleeps in a tent outside a local church, the library is pretty much the only place he can go that won't charge him to provide safety, warmth, useful services and entertainment.

Many public libraries discourage homeless people from hanging around all day. "It could be the way you dress, the way your hair is," says Bailey, whose scruffy denim jacket could use a good wash.

But just as Bailey needs his library, the library needs him: In this digital age, many people who used to depend on libraries can find what they need online without leaving home. Menaced by budget cuts, many public libraries are effectively failing to justify their relevance, reducing their hours year after year.

"We have virtual customers now. So people that are coming to just utilize our downloadable materials … don't even need to walk in anymore," said Cindy Kolaczynski, district director and county librarian.

This Town’s Walmart Was ABANDONED. What They Did Inside? Oh. My. Gosh!!!

Submitted by Bearkat on February 13, 2015 - 8:17pm
Topic:
Public Libraries
<blockquote>Many times, these (abandoned) buildings will just sit there untouched and slowly fall into ruin. They are often covered in graffiti, decked in spider webs, and they look like something out of a horror film...McAllen is a town in the southern section of Texas that saw one of its Walmart locations go out of business and sit idle for many years. After the store shuttered, it eventually fell into the property of the city, and the decision was made to turn the building into a public library.

This Town’s Walmart Was ABANDONED. What They Did Inside? Oh. My. Gosh!!!

Submitted by Bearkat on February 13, 2015 - 8:12pm
Topic:
Public Libraries
<blockquote>Many times, these (abandoned) buildings will just sit there untouched and slowly fall into ruin. They are often covered in graffiti, decked in spider webs, and they look like something out of a horror film...McAllen is a town in the southern section of Texas that saw one of its Walmart locations go out of business and sit idle for many years. After the store shuttered, it eventually fell into the property of the city, and the decision was made to turn the building into a public library.

Back to His Usual Library Duties

Phil saw his shadow this morning, so there's six more weeks of winter. Now, back to his usual activities at the
Punxsutawney Library. 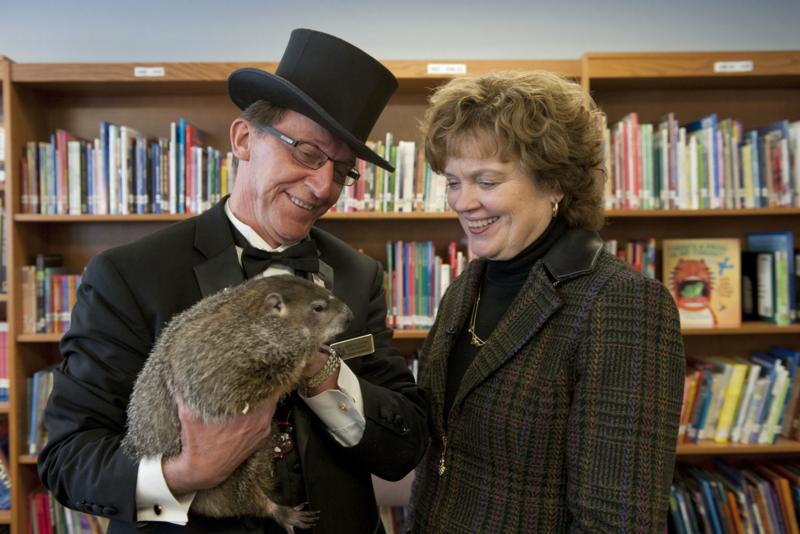 Evolution for libraries in Brooklyn

Submitted by stevejzoo on January 27, 2015 - 2:00am
Topic:
Public Libraries
Plans to redevelop two branches of the Brooklyn Public Library, including the Cadman Plaza branch housing the once well known business library. http://www.nytimes.com/2015/01/26/arts/plans-for-brooklyn-branches-have-merit.html?ref=nyregion

Artist Draws His Impression of 99 Branches of the Toronto Library

From August through October of last year, 25-year-old artist and geographer Daniel Rotsztain boarded buses, trains, streetcars and his bike with an inky pen in hand and plenty of paper. His goal was to capture the city’s bastions of books by drawing each one of them in a “homey, but blue print style”— a feat he sometimes conquered amidst scorching heat and drizzling rain.

The project was born out of a conversation Rotsztain had with friends about their favourite library branches. "It’s a love letter to the library,” he told The Toronto Star. It is hard to just wander randomly, but to have this quest oriented me well to explore every corner of every borough of the city.”

He is releasing the images on his website and is eagerly anticipating drawing the 100th library to open in the Scarborough Centre area this spring.

Town residents may soon be able to check out a bicycle from the Fairfield Public Library as easily as checking out a book.

The Health Department, in conjunction with the library, has received a $10,463 grant from the state for a pilot bike-share program with the goal of getting residents active and healthy.

Maybe many of the costs that bureaucrats decry are bound up in this online entertainment center aspect of libraries.

With the real definition and purpose of a library in mind, Fairfax officials should strive to offer what avid readers have wanted all along: a book-filled and Internet-free library.

Our nation%u2019s lawmakers have to share Washington, D.C. with a diverse group of residents. Among those residents are some of the most influential punk bands in history, and now, the D.C. Public Library decided to recognize this part of the city%u2019s history by creating the D.C. Punk Archive. Check out BBC%u2019s coverage in the video above.

What is a library?

While watching dozens of teenagers decked out in parrot masks and Bugs Bunny costumes dancing, jumping, and spinning on rolling chairs across the frame, anyone is likely to wonder: This was allowed in a library? And upon entering the space where the clip was filmed, many people do ask: Thisis a library? Aside from a few small shelves of test-prep materials, this 3,000-square-foot room holds no books.

The Future of Libraries Has Little to Do with Books

In a digital age that has left book publishers reeling, libraries in the world’s major cities seem poised for a comeback, though it’s one that has very little to do with books. The Independent Library Report—published in December by the U.K.’s Department for Culture, Media, and Sport—found that libraries across the nation are re-inventing themselves by increasingly becoming “vibrant and attractive community hubs,” focusing on the “need to create digital literacy—and in an ideal world, digital fluency.”

http://www.toledoblade.com/local/2015/01/04/Trouble-often-shatters-hush-of-local-libraries.html
A review of the Toledo-Lucas County Public Library’s security reports from 2012 through the end of last year detailed nearly 1,000 incidents a year, including criminal activity, theft, vandalism, disturbances, and sexual misconduct inside the county’s public libraries.

Rent a Car @ Your Library

Are you a card carrying member? Then you can do more than just borrow books at three branches of the Brooklyn Public Library, you can borrow a car.

As a BPL member, you can join Zipcar now and get $25 in free driving.

We bow to the inventors of this whole sharing thing. The library. They got it way before the rest of us. Borrow it. Use it. Return it. Then it’s someone else’s turn. Genius.

You don’t need that book collecting dust on the shelf. So you let someone else use it. You don’t need a car in Brooklyn all the time, so why pay for it all time? With Zipcar, you share cars with the folks in your neighborhood. You reserve it when you need it and put it back when you’re done.

As the new director at the Sitka AK library, Robb Farmer has lots of new ideas.

Farmer spent the last nine years at the Faulkner University Law Library in Alabama. He’s a lawyer himself, but says he enjoyed legal research more than the actual practice of law, and he found a way to stay in the library full-time.

But he was looking at the American Library Association job listings recently, and saw an unusual submission. Allowed only five keywords to help guide applicants, someone had posted…

Farmer had never seen or heard of Sitka. He checked out the listing. Of course, Sitka is spectacular. Those keywords, though, spoke volumes.

Hennepin County Library launches website, and worry, for some teen patrons
http://m.startribune.com/lifestyle/blogs/277953501.html
“We’ve had hundreds of comments,” said Turner, division manager for system services, “and have not heard any concerns from our library staff, nor patrons.” Library staffers have been able to preview the site for the past two weeks, she said, noting that it is “far more image-intensive, less tab-based and more like Pinterest.”

How to Make Libraries More Exciting

THE central branch of the Free Library of Philadelphia is an impressive building—its neoclassical facade looming over most of a block. But inside, though chandeliers still hang from the ceilings and the floors are of polished marble, there is a feeling of neglect. A musty taste hangs in the air; many of the books are rather battered. “The building opened in 1927 and we’ve really not touched it since then,” says Siobhan Reardon, the library’s president and director. “And you can tell.”

That, happily, is now changing. On September 11th Philadelphia announced it had secured a $25m grant from the William Penn foundation to update its old libraries. Yet libraries in general are struggling. Americans tell pollsters they love them, but fewer use them. In June the Institute of Museum and Library Services (IMLS), a federal agency, published data showing that library visitor numbers have declined in recent years. Polling published on September 10th by the Pew Research Center, a think tank, revealed that more people say they are going to the library less than going more, with a sharp gap among the young.

More from The Economist.